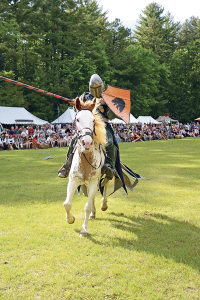 Robin the Hood and Maid Marion got married at last, in Sherwood Forest. It was a June wedding, held stateside at the Millers Falls Rod and Gun Club in Massachusetts. Their merry men attended, as did all the guests who arrived through the gates to bestow glad tidings. The Sheriff of Nottingham did not get his way this time, and the couple were able to complete their vows.

This enactment was one of the many plays put on by the nonprofit Knighten Guild and Co. for people who attended the Ninth Annual Mutton and Mead Medieval Festival. While it is never the same, it builds on the enactments from the year before.

In “real life,” the actors were residents of the area towns, and it was a great way for actors to ply their talents in an educational manner with a continuously moving and very appreciative audience. David Agro is president of the Northampton, MA-based Knighten Guild and Co., which is run as a nonprofit public charity. Instead of Robin Hood robbing from the rich to feed the poor, everyone got the chance to feel rich and charitable by giving non-perishable food donations that went toward their admission fees. Other monies went toward the upkeep of the Montague Grange/Common Hall, the Northampton-based Food Bank of Western Mass, Cancer Connection and the Center for Self-Reliance Food Pantry.

Jousting was provided by Bill Burch, owner of the Wisconsin-based troupe DeBracey Productions, in character as Sir William DeBracey. He jousted and caught rings with his lance amidst rousing cheers while riding a Thoroughbred/Arab cross named Aladdin. The sound of jousting lances smacking metal shields echoed and heightened the aura of real danger.

This joust was also a historical reenactment of medieval entertainment with a twist. In medieval times, his onstage daughter and fellow jouster, Theodora DeBracey, would have had to hide her long blonde hair under a helmet and mask her true identity and gender. Here, she let her hair flow free. A dab hand with the sword, she seriously wounded her opponent. Offstage, she is Jirah Whitehouse and lives in Florida.

Sir Keegan O’Connor rode a red and white paint, Cochise. Offstage, he is Caleb Jordan, resident of Georgia. It was his third year performing at Mutton and Mead. The troupe works from February to the end of October.

Riding since before he could walk, and jousting for 25 years, Burch started his company six years ago. Each show’s needs determine how many of his 20 horses are used. At Mutton and Mead, besides jousting, they did trick riding, leaping from a chariot and being dragged from a chariot.

At other shows, they perform Roman racing with a rider standing up on two horses. “That show requires a solid barrier,” said Burch. Or they use cannons and have flames streaming off the back of the chariot. As Mutton and Mead had only a rope barrier, they did variations of a bigger show, according to the safety requirements, using the entire space to give everyone a chance to see the show.

The riders rode helmet-less. “You have to know what you are doing, have good training. The main thing with riding is to have confident, competent riders, but not arrogant; that’s the key. We have to work with the horses, and they keep us humble. Horses are a part of our lives. We are with the horses 90% of our lives, that’s the only way that it works, and is required of everyone that works for me. The riders are independent contractors that are trying to become a better horse person, trying to improve their horsemanship skills, all the time, including me,” said Burch. The horses have to be well-trained and calm. 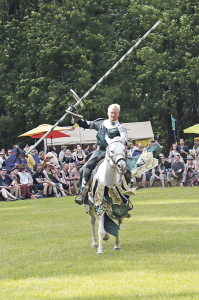 They do open field jousting, with no restraints on the horses’ mouths. Instead of trading hits, both knights make full contact hits. “We hit each other at the same time. The jousting is not choreographed. The order is choreographed, but the jousting is unplanned. Open field battle style is more of a melee,” said Burch. When they make contact there’s no pressure transferred through a bit in a horse’s mouth because they aren’t wearing any bits. “We restrain them with a slight suggestion – can’t muscle them in any way. We guide them with our feet and hands,” Burch explained.

The lightweight leather band underneath their horses’ chins cannot be clenched or squeezed, “no matter how hard we pull on the bridle. It’s loose, just dangling there,” as the horses wear a reduced hackamore type of headstall, with the chin chain removed.

“It’s better for them. If they don’t want to joust, they certainly don’t have to … There’s nothing forcing them. We guide them into jousting, with no restraints,” he added.

In open field jousting, there is no tilt rail or center fence barrier for guiding the horses, so their cues alone guide the horses into battle. The close communication with the horses is enhanced by their constant association of feeding, grooming, training and performing.

“I’m proud of the staff. They are all trained in-house, so they are trained by DeBracey Productions. All of them started with some riding experience or no riding experience at all. They’re becoming better horsemen,” said Burch.

The festival is a mecca for entertainment, eateries, drinking mead and beer and over 80 different entrepreneurial vendors.