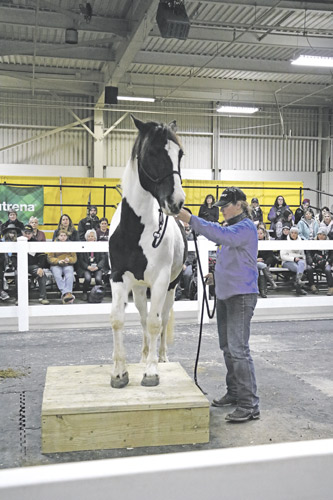 Need help in getting your horse over obstacles? You are not alone. The bleachers by the Demo Ring were full during the 2018 Equine Affaire while internationally known presenter Mark Bolender showed attendees how to help their horse overcome their fear and resistance to stepping over obstacles. In this case, the obstacle was a large one foot high, three by three foot wooden box, much like a stand seen in circuses that the horse was asked to step up on.

Mark Bolender and his wife Lee Bolender founded the International Mountain Trail Challenge Association (IMTCA) that promotes mountain trail riding as a sport, where obstacles are encountered as a matter of course. Author of “Bolender’s Guide to Mastering Mountain and Extreme Trail Riding,” he has produced five DVDs on this sport as well as riding bridle-less. He teaches his own training philosophy called “Unique Horsemanship” at Bolender Horse Park in Silver Creek, WA.

His method is not about dominating the horse but rather guiding the horse to trust its rider and accept its rider as someone “who is worthy of leadership” as interpreted by the horse. The horse operates under four principles: There is a definite pecking order in the horse’s world; the horse is a natural born follower, but only to a clear and consistent leader; the horse tries to please the horses they consider superior to themselves; and lastly, the horse’s instinct drives the above three principles.

To apply these principles as a rider working with the horse, the rider must gain his trust and then and offer the horse sound, trustworthy leadership that helps the horse learn to trust itself and triggers the horse’s natural instinct to pick its way boldly and confidently through obstacles as it would do in the wild – to find a way to have the horse slow and relaxed in their mind while doing so, a process that cannot be forced. This takes time.

The process was built on years of learning to decipher a horse’s language to understand what he is trying to tell its rider and applying it to obstacles. Horses would rather avoid bridges or cut a width berth around obstacles like logs and boulders.

Building a partnership of trust between the horse and handler on the ground and then being up in the saddle allows for successful and safe navigation while competing on the mountain trail riding course, or out in the wild on rides or 20 or more miles, far away from emergency rooms, where riding safely in tandem with your horse to avoid accidents becomes even more crucial. 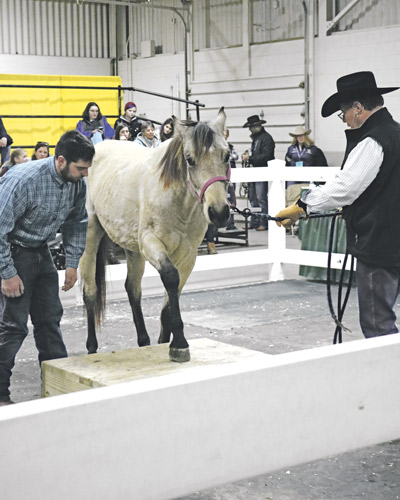 “If you train properly, they have no recollection of it and no fears,” said Bolender, introducing a roan horse to the box that its owner had signed up for the class.

“See how he keeps trying to crowd me? I have to lean to block him since he’s a blocker,” said Bolender as the horse moved up close to him. “He’s not coming to me for comfort. It’s an instinctual response when they move into your space like that; it’s like a challenge. He’s saying ‘I’m scared of this box.’ An instinct will move him into you to put you down below him. If they move you then they see you as below them, and then you have to go to mechanical training, get a bigger bit, rather than training with the mind.”

The horse may have been overwhelmed by the stage setting and having so many people crowded in near him. The demo ring was tight, approximately 20 by 20 feet with about 15 feet between its fencing and the bleachers. It took many tries, but eventually the horse stepped onto and off the box, and he and his owner left the ring. Again, patience and perseverance, not giving in to one’s impatience and instead being a leader, were key for this exercise.

Another owner, Heather Hogencamp, brought her horse into the ring and very quickly had him standing up on the box.

“These are nice horses; get a horse six foot and three inches tall, it’s a different story,” said Bolender.

“Earlier there was a large warm blood mare whose behavior was volatile. She would get up on her hind legs and come at you. Warm bloods have to have a fire in their belly to do all the jumps, but when it gets out of control, we work not to change their personality but work to have them see us as the leader,” he said. He turned his back to her and showed he was not afraid, and then turned back and got her under control. “It was one of the horses that every clinician wants – makes you feel like God.”

While training at his Bolender Horse Park and working within the framework of the instincts of the horse means it takes an average of five minutes to get a horse to go over a swinging bridge, something that might have taken three years before. “Once we learned to incorporate instinct in the training program, their language and nuances, it’s like you are a magician. It changes everything,” said Bolender.

Previously in his horse-oriented career, Bolender bred Quarter horses and trained and showed horses competitively in open, Quarter horse and reining competitions. He earned national titles in 2008, and trail challenge competitive sports in 2009 and 2010. Besides internationally designing and building mountain trail courses throughout the U.S., Canada and Europe, he judges mountain trail competitions. He holds IMTCA qualifying challenges for association members and two-day mountain trail and extreme trail competition judge certification courses according to IMTCA rules that results in a Bolender certificate.