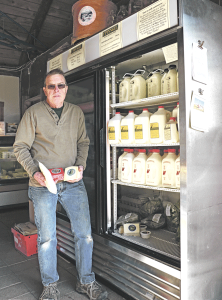 To keep dairy farmers up to date with the ever-changing COVID-19 situation, the Center for Dairy Excellence invited dairy leaders to address common questions.

“One item deals with providing direct assistance to producers as much as possible,” said Bleiberg. “We have proposed doing this in a way that would try to align supply and demand. It isn’t common for National Milk and IDFA [International Dairy Foods Association] to find agreement on any kind of a proposal. The fact that we’ve found agreement here speaks to the severity of the situation.”

Bleiberg said while some details must still be worked out, the main goal is to put proposals in front of USDA Secretary Sonny Perdue and determine USDA’s willingness to engage on the broader concept. At that point, Bleiberg said it becomes easier to talk about tweaks and whether the program is fair to all.

“There’s agreement that it would be beneficial for USDA to do as much as possible to buy large dairy purchases over a period of time and get them in the hands of food banks and other food insecure populations,” said Bleiberg. “Given that we have a major unemployment situation right now and more people are in need of food, if we can get dairy products into as many hands as possible, we’re better off. We’d much rather do that than buy product, have it stored, then have it overhang the market several months from now when we come out of this.”

Bleiberg also discussed milk dumping. “There’s a lot of milk being dumped, and we want to make sure farmers are compensated for that as much as possible,” he said. “Some of that occurs at the farm level, some occurs at the plant.” Bleiberg added that NMP wants to make sure there is no incentive to dump milk and that donating fluid milk to food banks is a better option.

The Dairy Margin Coverage Program (DMCP) was another topic of discussion. “We have proposed that that be reopened for signup for 2020,” said Bleiberg. “Some folks in the industry say the program should not be reopened because people had the opportunity to sign up before, but we feel this is an unprecedented situation and it makes sense to open the program.”

Bleiberg said while direct payment is a factor, it’s unclear how that will play out. “The DMC is a program we’re all familiar with,” he said. “We worked hard with Congress and with USDA to get the program enacted into law, so we want to make sure it’s available for as many producers as possible.” Other topics in the plan include additional loans to processors to help manage financial risk and flexibility for WIC and school meals.

Claudia Larson, director of government relations, NMP, discussed the SBA loan in the CARES Act. “The Paycheck Protection Program (PPP) is a brand new program created in the CARES Act,” she said. “The general purpose is to keep the small business workforce employed across the country. Loan forgiveness is available for certain portions under the PPP. In general, any small business that has 500 or fewer employees can access loans under the PPP.”

The PPP will most likely be accessed by producers and co-ops, and provides loans up to $10 million to cover payroll and other very specific expenses. Larson said loan forgiveness is available on funds spent and interest accrued the first eight weeks after that loan has been disbursed. Loans have a 1% interest rate, and collateral and personal guarantee requirements for such loans have been waived.

Larson outlined key points for producers applying for PPP loans. Funds from PPP loans can only be spent on very specific business expenses, including payroll, interest payments on mortgages, rent and utilities; 75% of funds must be spent on payroll expenses. Businesses taking PPP loans or seeking loan forgiveness are disqualified from certain business tax credits and other tax deferrals that were created in the CARES Act.

Dairy farmer Walt Moore discussed the importance of updating farm contingency plans. After participating in a call with a consultant, Moore and his wife learned that while covered in some areas, there were potential shortfalls in their plan.

Moore and his wife discussed milk and feed hedging positions, cash on hand, lines of credit and spring supplies such as seed and fertilizer. He updated protocols for veterinary visits, including requiring the herd manager to wear a mask when working with the vet. Because some employees were living in one house, an extra cleaning regime was added, and a separate apartment was secured in the event a COVID-19 positive person required a quarantine period.

“We covered minimizing employee risk, minimizing risk in our supply chain and minimizing financial risk,” said Moore. “We talked with employees early and communicated often, updating them as the situation changed, and implemented additional safeguards for their health and safety.” He emphasized to employees the importance of continuing established safe practices for everyone’s benefit.

On his farm, Moore posted signs in both English and Spanish regarding hand washing, mouth covering and other health basics. “We also made it mandatory that when they came in to work to wash hands and disinfect before starting work,” he said. “We’ve added extra cleaning regimes to areas such as the break room, time clock, door handles.” Moore also made sure there were ample supplies essential for the milking such as milking gloves and teat dip, and changed delivery/drop off protocols to ensure minimal contact during such interactions.

Pennsylvania Ag Secretary Russell Redding discussed a joint letter with New York Commissioner of Ag Richard Ball. “The Pennsylvania/New York partnership has been invaluable in many ways,” said Redding. “As two major dairy states in the northeast, we conveyed jointly our support for several items. Everything we have asked for tracks closely with what National Milk Producers and the joint proposal to include direct payments to producers. Getting cash now is important, and we recommended a $3/cwt. We also addressed the dumped milk compensation and food purchases with a continued surge in demand at food banks.”