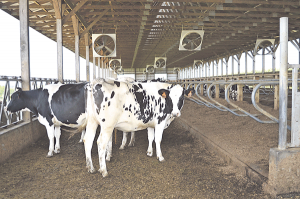 Dr. Andrew Barragan, Department of Veterinary and Biomedical Science at Penn State, said uterine diseases are among the most prevalent diseases in dairy cows – as high as 50% in some herds. These diseases can cost between $106 and $360 per case, and cows suffering from uterine disease are more likely to get sick with other diseases.

Barragan said it’s important that everyone working with the herd understand and agree on what constitutes disease in order to diagnose, make treatment decisions and work on prevention.

One of the most common reproductive diseases is metritis, which Barragan described as an infection of the layer of the uterus characterized by an enlarged uterus and the presence of abnormal red/brown and foul-smelling vaginal discharge. Metritis is often accompanied by systemic signs such as fever, depression, anorexia and decreased milk production.

Barragan noted that metritis is an infection of the uterus before 21 days in milk (DIM). After 21 DIM, the uterus has undergone some degree of involution and is smaller. “The disease is now called endometritis,” said Barragan, “an infection of the endometrial layer of the uterus.” Endometritis is characterized by a purulent vaginal discharge, and affected cows do not typically show signs of systemic disease such as fever. Barragan added that metritis and endometritis have the highest negative impact on fertility.

In a metritis study, 800 cows were screened for metritis from calving to 21 DIM. “About 95% of metritis cases were diagnosed in the first 14 DIM,” said Barragan. “Most of them were around seven DIM. The range I use to screen for metritis is between four and 10 DIM.”

In a study that included screening 1,900 animals for endometritis, results showed the incidence decreased as the cow moved through lactation and her uterus decreased in size. “The perfect time for screening is between 24 and 30 DIM,” said Barragan.

In some cases, uterine disease can be diagnosed by an experienced producer or herd manager. Barragan said metritis and clinical endometritis can be diagnosed through visual observation, a gloved hand, a Metricheck device or by vaginoscopy. Barragan added that a veterinarian can perform an ultrasound to diagnose clinical endometritis at about 27 DIM.

Diagnosing subclinical endometritis requires assessing the number of inflammatory cells in the endometrium by uterine cytology and/or uterine biopsy. Ultrasound can be used to measure the thickness of the uterine wall to assess inflammation.

“Visual observation is mainly looking at the cow to see if there is abnormal discharge when lying down, about one hour after milking when all the cows are laying down and ruminating,” said Barragan. “The pressure of the digestive organs compress the uterus and help expel abnormal fluid. This is a fast and inexpensive technique with little training involved, but might show some false negatives because not all cows will expel fluids.”

The gloved hand technique is similar, and allows assessment of vaginal fluids. “Use a clean palpation glove, clean the vulva, put lubrication on the glove and go in through the vaginal cavity to the cervix,” said Barragan. “Collect some fluid and check the features of that fluid.” Barragan added that this technique is more accurate for diagnosing metritis, but can be traumatic for first lactation cows.

The Metricheck technique, which Barragan prefers, involves a device to collect vaginal discharge. “It’s durable and inexpensive,” said Barragan, describing the device. “We can get a more accurate assessment of vaginal discharge and decide the best treatment protocol for that specific case.” Collected fluid is assessed by color and odor. Barragan noted that cows with more severe infection have higher inflammation and more severe pain with the infection as measured by an inflammation biomarker.

Vaginoscopy can aid in assessing abnormal fluid in the vaginal cavity. It’s fast and inexpensive, requires little training and allows the herdsman or veterinarian to look for abnormal fluid at the cervix. However, this method has a high level of false negatives and is somewhat more time-consuming compared to other methods.

Barragan said the cytobrush technique is the gold standard test, and involves collecting cells from the endometrium – the inner lining of the uterus – to assess the number of neutrophils, or inflammatory cells. “It’s very sensitive and specific,” said Barragan. “It’s relatively inexpensive but it’s an advanced technique and requires good training.” The herd manager and veterinarian work together for the cytobrush technique: the herd manager collects the sample and the veterinarian processes and assesses the sample. Barragan describes the cytobrush tool as an insemination gun with a small brush that collects mucosal tissue from the uterus. After collection, the cytobrush is rolled onto a slide for examination and the veterinarian assesses the level of inflammatory cells. Good technique is essential with the cytobrush because blood contamination can lead to inaccurate results.

The three main factors that influence the level of uterine disease in the herd include environment, cow comfort and health and farm personnel. The cow’s environment should be clean and comfortable, with adequate stalls of the proper dimensions. Barragan said many of the main pathogens involved in metritis, such as E. coli, are environmental.

Barragan described a study that used a simple system to score cleanliness and risk of uterine disease. The perineum area was assessed at calving, and included the area starting at the base of the tail to the pins and to the rear udder attachment. A score of 1 was for cows totally clean and dry in the area, a score of 2 was slightly wet with dirt and manure on about 10% of the surface, and a score of 3 was moderately wet and covered with dirt and manure on more than 10% of the surface. Not surprisingly, results showed cows with higher scores had a higher incidence of metritis.

“Early detection and accurate treatment is key,” said Barragan. “We’re going to identify those animals on time, treat them with the right treatment and decrease the negative impact of uterine diseases on fertility.”