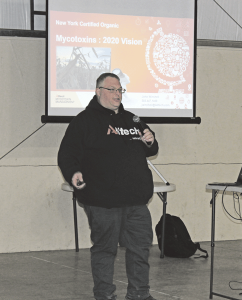 WATERLOO, NY — Molds and mycotoxins plague many farmers, but John Winchell, New York territory sales manager for Alltech, admitted, “I love them! It sounds funny to say, but they fascinate me.”

He offered a presentation earlier this year on the topic at a meeting of New York Certified Organic, hosted by Cornell University at Martin’s Auction House in Waterloo, NY.

“A lot of people confuse the terms,” Winchell said. “They’re similar, but different. People call and say their haylage is a certain color and can have mold but mycotoxins or mycotoxins but no mold. They want to know what they have.”

He said color, weather conditions and type of crop involved help determine what type of mycotoxin or mold is present.

“If you have one mycotoxin, you likely have others,” Winchell said.

Molds may or may not turn into mycotoxins.

“Molds are like a skunk,” Winchell said. “If you see one, you are not necessarily going to get sprayed.”

He added that molds are also like skunks in that stress tends to produce unwanted results —mycotoxins in the case of molds. Unlike a skunk’s spray, mycotoxins are odorless, often colorless, toxic and subtle.

“We know mycotoxins are formed when we have a water event and heat between 60 and 80 degrees,” Winchell said. “We have three times the amount of mycotoxin as the rest of the country.”

Factors that play into that include the tendency for wet, cold springs to push planting out late. Fluctuating temperatures can stress the plants. Rain not only helps release mold spores when it occurs before flowering or tasseling, but after this point, rain helps mold get established on grain.

“When you get weather stress between tassel and silk, or when flowering and you get rain, you’re at greater risk for vomitoxin,” Winchell said. “Weather isn’t in our control, but we can pick good varieties” and do other things to mitigate the effects.

Other factors that can affect the likelihood of mycotoxins developing include harvest stress, bunker management and specific corn traits.

He calls the area between Minnesota and Maine the “mycotoxin alley” because of the tendency of this region to receive untimely rain, heavy dew and cool springs.

“In the South, temperatures are out of range for the mycotoxins we get up here,” Winchell said.

He said crop rotation should be among a farmer’s tools for controlling the spread of mycotoxins.

Implementing reduced tillage can also help, since it reduces residual contamination and can boost soil health. But even if a farmer rotates faithfully, it may not eradicate mycotoxin issues.

“If neighbors monocrop, you’ll have more mycotoxins,” Winchell said. “Your neighbors’ problems can typically be your problems.”

Choosing the right variety to begin with can help farmers reduce problems with mycotoxins.

“Don’t let the seed guy tell you to plant a long seed corn to get a longer window,” Winchell said. “Plant what your soil wants.”

Soil testing can help reveal the best varieties to use.

Winchell also said farmers should recognize the importance of location.

“Where are the mycotoxins?” he said. “Are they in the stalk or ear? When it gets on the silk, it goes systemic. If it’s in the ear it’s in the plant.”

He said each year growers may have a different signature of the mycotoxins.

“According to the FDA, there’s no mycotoxin binder; there’s just mitigation factors,” Winchell said. “Do your homework. Most mills are testing. You’re always going to have mycotoxins. It’s not ‘if’ but ‘when.’”