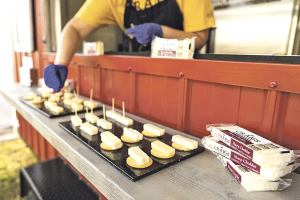 In a time when dairy farmers struggle to stay solvent, finding new ways to market and sell their milk – including making value-added products – can make all the difference. That’s how Craigs Creamery in Linwood, NY, started. Eight family-owned dairy farms banded together to offer a means of processing and selling milk that keeps more of the profits with the farms.

A big part of their selling point is that they’re producing food that’s local, usually sold within mere miles of the farms. Craigs Creamery taps into the locavore movement, which has encouraged consumers to seek products of known origins.

The farms invested in a milk processing plant, which handles some of the farms’ milk for use in cheese. The rest is processed and bottled for consumer use at Pittsford Farm Dairy in Pittsford, NY, about a 30-minute drive away. Craigs doesn’t bottle milk for consumers on-site.

A few years ago, Craigs invested in building a cheesemaking facility on the same site. Craigs makes 40-pound blocks that are cut, sliced, diced and shredded elsewhere.

“Craigs Creamery was born out of the cheese plant venture to connect with consumers,” said Chris Noble, a co-founder from Noblehurst Farms, one of the partner farms. The member farms have their milk processed and turned into cheese for sale under the Craigs Creamery label.

During the recent COVID-19-related supply chain interruptions, Craigs ramped up production to meet demand and to enable the business to donate products.

Noble said that consumers are “attracted to the story and the product. They understand we can’t do everything on our site. We are looking into ice cream, yogurt and fluid milk. Working with partners in the community helps us to not reinvent the wheel.” 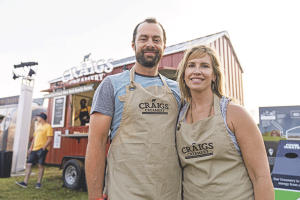 His wife, Jenn Noble, said that the company has seen an uptick in consumers shopping at more Mom-and-Pop stores, likely in response to concerns about shopping at larger stores which they feel increase risk of exposure to COVID-19.

She feels these factors “are organically growing the brand. They know where the milk is coming from.”

“We’re coming out of a six- to seven-week period of an unprecedented time for dairy farming,” Chris added. “We’re going to be living a new normal. One of the benefits is people seeking out local brands, including Craigs Creamery.”

Noblehurst Farms operates a lawn and garden business that also carries Craigs products about two miles from the plants. A zoning issue has prevented Craigs from opening a store at the plant.

Chris views the farms’ chance to connect with consumers – especially during the pandemic – as positive.

Because many people are a few generations removed from farm life, Chris believes that staying local helps the public rediscover the fundamentals of food and agriculture.

“They’re interested and have good questions,” he said. “It’s an opportunity to educate and this extends to more people planting gardens. Overall, this is going to have a positive impact on consumers’ interest in local foods and our brand in particular.”

Craigs Creamery puts a heavy emphasis on environmental stewardship in its branding and core values, including the anaerobic digester at Noblehurst, which powers the farm and creamery and recycles animal waste and local food waste.

In addition to environmental concerns, many people have become interested in food sources and tracing where their food originates from. Craigs Creamery’s milk comes only from its eight farms, which matters to some consumers. Jenn also believes the milk’s quality makes a difference to consumers. 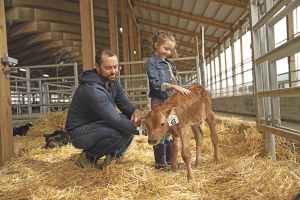 “Our standards are high,” she said. “We receive extra money for the quality of the milk we’re supplying. It makes some pretty great cheese.”

“We just launched this brand not even 18 months ago and we’re already talking about expanding into cheese curds,” Jenn added.

Since cheese curds don’t require aging, expanding into this product can help decrease the turnaround time from milk to sales.

Presently, Craigs has the capacity to make about 50,000 pounds of cheese daily, but uses about 1% – 2% of that capacity.

Though milk prices dipped during the shutdown period, Chris hopes prices will continue to climb. “We’re farmers; we’re constantly optimistic,” he said. “Towards the end of the year we’ll start to see some [good] prices.

“There’s been a lot of interest in donating money and food, and trying to help the community get through this,” he continued. “Food pantries and food banks have banded together to meet that need. As farmers, we’re trying to help the best we can.”