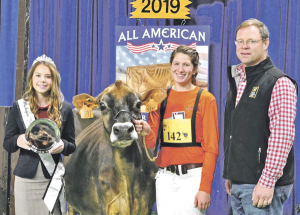 Megan Hill has been involved in raising dairy cows for 19 years, which is pretty impressive. But when you learn that she’s only 21 years old, it becomes inordinately impressive.

“I actually got my first Jersey cow when I was two years old,” laughed Megan. “I’ve been at this for a while.” So has her family. Megan is part of the third generation to work the family farm founded in the 1960s.

Situated on 3,000 acres in Bristol, VT, at the western foot of the Green Mountains, you could be forgiven for assuming that Four Hills Dairy Farm got its name from the view on its horizon. In fact, the farm was rechristened Four Hills when the family’s second generation, consisting of siblings Ron, Brian, Joanne and Kevin Hill, bought the farm from their parents. Today, Four Hills has over 2,100 milking cows.

As Ron’s daughter, Megan has been learning all she can about dairy cows since before she could walk. After completing her studies in agricultural business at the SUNY Cobleskill, she returned to the farm as its reproduction manager. She’s had great success in that role, having won multiple awards in November at the All-American Jersey Show at the North American International Livestock Exposition (NAILE) in Louisville, KY.

NAILE, taking place annually, dates back to 1974 and draws participants from the 48 contiguous U.S. states. It is one of the largest all-breed, purebred livestock expos in the world.

The Junior Premier Performance Cow Award is given to the cow bred and raised by an individual 21 years old or younger that best embodies the traits of a quality dairy cow. “What they’re looking for,” explained Megan, “is whether or not the cow converts its feed well. In other words, she’s not getting fat off of what she’s eating, but producing more milk because of it. They look to see that the teats are squarely under the udder. And they look for prominent veins. These are all good signs that the cow will milk out.” Megan’s prize winning cow, three-year-old Gloriana, is the competition’s latest Grand Champion. “I bred her mother, and I’ve raised her since birth,” Megan said.

Megan was also named the event’s Premier Junior Breeder. Likewise awarded to an individual aged 21 or younger, it recognizes the breeder who has placed highly with multiple animal entries. Megan’s other entry, four-year-old Galaxy, placed very well in the show, which featured 215 dairy cows in the junior division.

This was Megan’s last year of eligibility to compete in the junior breeder category. Looking ahead, Megan is eager to continue working with her current family of cows. She believes they are now seen as constituting a quality lineage and would be very desirable for purchase by other farmers in the future. “Galaxy is actually the full sister of Gloriana’s mother. It’s a very good bloodline, and I want to work on producing more like them,” she said.