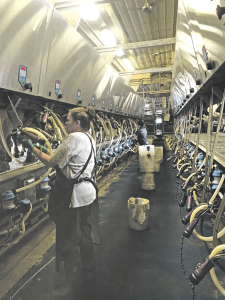 The Gervais Family Farm is home to a number of family members who have chosen to stay on the farm. One is Kati Lawyer-Hale, third generation farmer, and the only one out of 45 grandchildren on the farm today.

The Enosburg Falls, VT, business includes two farms – one houses 800 milking cows, and the other is the original farm with 1,000 cows. “I manage the cows on the original farm,” said Kati. “My uncle Tom manages all the young stock, my uncle Larry does all the cropping and feeding and my uncle Clement manages Farm Two and the digester, along with all the odds and ends.”

But Kati didn’t necessarily plan to be on the farm today. “I wanted to see more outside of our small town,” she said. “I couldn’t imagine being tied down to one place.” After finishing college, Kati returned home and realized what she was looking for was right there on the farm.

Today, Kati is the herdsman on the home farm. She spends a good part of her day walking through the herd to check cows, and also manages a group of employees. “A lot of my day is taken up communicating with the employees and making sure they’re happy, the cows are happy and everything is running smoothly,” she said. “I handle both cow and people issues.”

Cows are housed in a freestall barn, bedded with separated solids from the farm’s methane digester. “Two years ago we installed an Afimilk parlor,” said Kati. “All the cows have pedometers and their activity is monitored. When the stalls are low on bedding, Afi sends an alert to tell us we have a bedding problem.”

Separated solids bedding have pros and cons, Kati said, but one of the biggest pros is the ability to use more material than when the bedding was sawdust, which makes a more comfortable bed for the cows and helps prevent leg issues. The separated solids from the digester serve both farms.

The liquid manure is stored in a lagoon and applied to crop ground via a drag line and injection system. Kati explained that the liquid portion is more liquid than what would normally be in a lagoon without separated solids, and the injection system helps minimize runoff.

About 85% of the farmed land is maintained as no-till ground. “We’re trying to be pioneers in reducing runoff,” said Kati. “We’re trying to implement as many practices as possible in cropland. With us being a larger farm in Vermont, there are a lot of eyes watching us. We want our land to be here for the next generation, so we’re being more proactive in adopting different technologies. We want the land to be healthy.”

Kati works hard to maintain a low somatic cell count. Her goal is to keep it under 100. “If we’re only getting paid so much for milk, why not try to achieve the highest quality tier to make as much as we can?” she said. “If we’re already doing everything else, why not get more for what we’re producing?”

In her quest to achieve an even lower SCC, Kati is considering drying off cows 55 days before calving. “We’ve made quite a few changes in the milking set-up over the past couple of years to benefit the cows,” she said. “About four weeks before dry-off, they’re in a low group, and get a mostly forage diet. About four weeks before calving, I move cows to a close-up pen. When I see signs they’re getting ready to calve, I put them on a pack.” After calving, fresh cows are milked in a separate parlor for 24 to 48 hours to collect colostrum.

For the first week, calves are raised in individual pens for health monitoring and to make sure they’re drinking. They’re then moved to small group housing where they receive free-choice pasteurized, acidified milk via a nipple bar. “Average daily gain for calves is about two pounds,” said Kati. “It has helped them grow well. They look a lot better than when they were in individual pens.”

The Gervais family uses their old herringbone parlor from the 1970s for fresh and treated cows, which are milked in two separate groups. Kati said mixing first calf heifers with mature milking cows helps the heifers learn how to move through the parlor and adapt faster without stress. During the several weeks heifers are in that group, Kati maintains a stocking rate of less than 100% stocking density to avoid pushing and crowding.

Next, heifers are moved to a heifer high group. “I have a second lactation group and a three-plus lactation high group,” said Kati. “I’ve found that housing the second lactation separately in the high group helps them socially, and they seem to be peaking a little higher.”

Cows in the regular milking string are milked three times a day in a double-18 parallel parlor. When possible, Kati strives to maintain small cow groups to get them in and out quickly. There are three milkers per shift, and each person is assigned six cows on both sides. Kati said this allows plenty of time for the entire milking procedure to be done properly, starting with good prep and let-down.

Kati said managing employees didn’t come easily for her, but worked out well after she was able to select her own team. “Building my own team and choosing people to work for me was a turning point,” she said. “Being clear about my expectations, having rules and boundaries, emphasizing the importance of milk quality and staying in contact with them is huge. I want employees who are proactive and do a good job.”

Monitoring milk flow in the parlor helps workers gauge how well they’re doing every shift. Kati provides a printed review of the previous milking performance, which gives milkers a basis for improvement. “One of the parameters is to get over 50% of the milk in the first two minutes,” said Kati, adding that average milk out time is four minutes. “They can gauge how well they’re doing.”

“I’ve found that an employee might think they’re doing a great job, but if they have nothing to compare it to, they start slipping because they don’t see them” said Katie. “Having everyday parameters for progress and success is a huge game changer.”