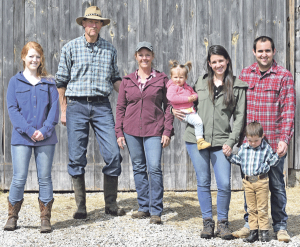 WEST MILAN, NH – Farm and family are closely intertwined for Mary Mullins Tichy. She breeds, raises and sells grass-fed Black Angus and cross-bred cattle at Riverstone Farm on what was once her grandfather’s dairy farm, located between Route 110 and the banks of the Upper Ammonoosuc River.

As a girl, Mary was an enthusiastic 4-H member, specializing in sheep, which included competing at fairs.

She met her husband, Ted, when only 15 and a student at Berlin High School and he a newly-hired forest technician at Boise-Cascade.

“After we were married, we bought 100 acres of my grandfather’s property, including the big weathered barn he’d built in 1947 to store hay and house cows and later sheep,” Mary explained.

When their two daughters were young, they had a single milk cow. They added chickens, sheep and horses, plus vegetables and other crops.

The beef cattle that Mary raises spend nearly all their time outdoors. She manages 55 acres for hay and crops and 100 acres for pasture, with the rest mostly forest that Ted manages.

“The size of my beef farm is determined by balancing how much hay I can produce for the winter months and how much pasture I have available for the summer,” Mary said. “I winter over approximately 35 head and have 50 in the summer. Another key factor is the decision I made to feed them round bales of high-moisture hay.

“I can mow, ted, rake and bale all the hay I grow without any help,” she said. “Ted usually helps me wrap the bales after coming home from his job as a licensed forester … and he’s my chief mechanic.

“Not having to buy feed regularly or to hire help means I’m able to keep costs low,” she continued. “I want North Country families with young children – and not just doctors and lawyers – to be able to afford this top-quality beef.”

Most years, she raises 10 calves to sell live for meat to a list of repeat customers. In line with state law, the new owners make their own arrangements about how to divide up each cow. She raises a few more calves for her own freezer.

“Someone is hired to do the slaughtering and hanging,” she said. “I knew when I started that I could never truck them to a slaughterhouse.” Ted does a lot of the cutting of the beef cattle they keep for their own family. “I don’t ever watch them be killed; these are animals that I’ve petted and cared for.

“The cattle are given no grain at all until 10 weeks before they are slaughtered, when they are kept in a paddock area and fed grain,” Mary explained. “Before that, they are only pastured and fed hay.”

Adding grain or not comes down to a taste issue, she said. “Most people have only ever eaten beef bought from a supermarket meat case. Grass-fed beef has a stronger and distinct taste, while grain-fed beef is marbled with fat. My family enjoys the taste of completely grass-fed beef and when I cull an old cow, I put it in our freezer. It’s not prime beef, but it has the grassy flavor we like.”

They also keep seven saddle horses, a donkey, a rooster and 11 hens.

“Our dream was to build our own house,” she said. “Ted’s dad was a carpenter, and Ted worked with him growing up. Our house had to be made of wood. I used a spud and drawshave to peel off the bark. Some trees got scarred from catching on rocks and roots. I love to look up at the exposed beams in our house and remember how those ‘imperfections’ got there.”

When their two daughters were in college, Mary worked for six years (from September to February) processing at a nearby slaughterhouse to help pay tuition bills. The six-months-on, six-months-off schedule allowed her to continue running the home farm.

The couple has undertaken two major farm improvement projects with the assistance of the USDA-NRCS: one designed to protect the banks of the Upper Ammonoousuc River and the other to install a custom-designed heavy-use management area.

Both of Mary and Ted’s daughters live in New Hampshire. Alexandria, a music major who graduated from the University of Rhode Island, lives in Boscawen. Jesse, her husband Andrew Paine, and their two young children have been living with Mary and Ted for a year and a half. A graduate of Keene State, Jesse is employed as a nutrition educator by UNH Extension in Lancaster.

“I enjoy seeing our grandchildren enjoy the farm,” Mary said, adding that their presence keeps her cooking, baking, knitting, sewing, quilting and weaving.