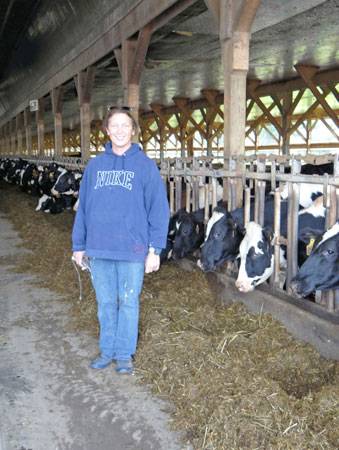 “So, our big push was to learn how to raise calves.”

That was back in the ‘80s when Marks Farms was just beginning under the new ownership of Jackie, her husband Dave and her younger brother Bill. All three are original ‘senior partners’ in Marks Farms.

At that time the herd consisted of about 300.

The total herd, numbering about 10,000 mixed Holsteins and Jerseys, are housed on premises in free-stall facilities.

“All of our growth is internal,” said Jackie. “We have a closed herd. We haven’t bought heifers since the ‘80s. We bought those heifers from Ohio. There was better than 100 of them, I’d guess.”

Jackie explains how the dairy began.

“My grandfather was an immigrant from Poland. He came to Brooklyn when he was a young child. He lived in Brooklyn for a while and when he was 19 or 20 he and a cousin came up here and bought a farm.”

As the family expanded, the farmland expanded as well.

“My grandfather had five sons, one was my father. One son had a homestead and each of the other brothers had small farms all around this area.”

When one of uncles died in his 20s another uncle took over his farm.

“Back in the early ‘90s and late ‘80s they had all of the buy-out programs and my uncles were getting older, so we bought out first one uncle and then another uncle. My dad (Herbert Marks) was a veterinarian and he died in 1985, so my husband and I started out with a 3-way partnership between myself, my husband and my younger brother, Bill Marks.”

Bill continues to be a partner in the dairy that has grown by leaps and bounds.

Jackie says her dad “was one of the pioneers in embryo transplants and one of the first A.I. breeders. “Back in probably the ‘40s, when he was 17 or 18, he would go to Watertown and pick up semen and breed cows A.I. And he was a big embryo transplanter in the ‘80s.”

“After my dad died it was pretty rough,” Jackie recalled. “In 1987 we were in bad shape financially. Our problem was we weren’t very good with young stock. We sat down at the table and said, someone’s got to learn how to do calves. So, I took that over and I designed that calf barn — I was pregnant with Stephen and I thought I was signing my life away — and that was the beginning of everything.”

Raising and selling steers enabled the farm to build up funds.

“We used that to build a savings account and as soon as we could get heifers in, we put heifers in and we just started to grow.”

However, having to travel to the radius farms each day took a toll on time and efficiency.

Better housing improved their ability to raise quality calves and allowed them to continue to expand.

“We used to have 100 hutches out in the field, and let me tell you, that was hard work! Then we built a super hutch and started working more with the calves.”

Presently there are seven calf barns, where bio-security is huge and calf barns are off limits to everyone, except appointed personnel.

Each calf barn is a closed area and has its own specific employees. This lowers risk of cross contamination in case of illness and is part of the farm protocol. Calf mortality is less than 1 percent.

“Each person is responsible for their own barn.”

There are usually about 650 calves are housed in the barns. The neonatal barn holds 150 calves.

After calves in one group are all moved out of one barn, it is pressure washed, sanitized and left empty for as long as possible before another group begins to come in.

“She does all of our repro work, our preg checks and everything,” said Jackie. “If we need her, she does our emergency calls, we have a good staff and those guys do a really good job, but if they get in over their heads she’s here to do that — and pretty much she’s in charge of the baby calves. She oversees all of that.”

Pasteurized waste milk is fed to the calves and Lindsey is currently conducting and documenting a study comparing milk re-placers and pasteurized milk’s effect on calves and their response in growth and health.

The farm has an in-house lab where blood work and testing can be done.

Although things have slowed down recently, Marks Farms’ fresh heifers have been sought after, providing a bit of a side business.

James Rinaldo, Genex, is one of the farm’s “team”.

“He’s been our only breeder for 6 or 7 years. He pretty much solely breeds all of our animals.” 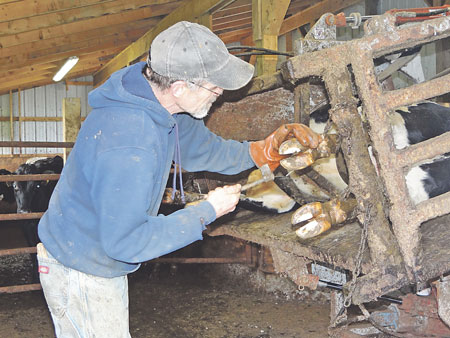 Sexed semen is used only on “first service visuals.”

“You know they’re in a standing heat and it works really well for us. We’ve had very good luck.”

The farm also hired a private hoof trimmer, another point for bio-security.

“He is the only hoof trimmer that we have on the premises, he doesn’t trim for anybody else.”

After pregnant cows are trimmed they are re-checked for pregnancy, moved to the pre-fresh barn and vaccinated.

“Then we put them on a different ration and get them ready for calving.”

Protocol is strictly followed in all farm procedures. New employees are required to watch safety videos and are specifically trained in their jobs.

“We’re in the process of making our own milking video so that we can train our workers better,” said Jackie. “We love our employees. They’re good people.”

Many employees have been with the farm for much of their lives, such as Dennis Zehr, who has worked at the farm for 32 years.

“Dennis has been here since the beginning. He tests all of the loads of milk, does the pasteurizing of the calves milk, breeds cows, takes care of sick animals, he does milk house maintenance. He’s done everything, milking, working in the calving barn, been on call every other night, and worked side-by-side with us 16 and 17 hours a day.”

Jeff Stewart, head feeder, has also been with the farm “on and off” since the ‘80s.

Milk is directly loaded four or five per day into waiting trucks and marketed with DFA.

Stalls are bedded with sand, which is then washed and recycled through a processor that pulls the solids out, which are dried and composted and recycled.

Local companies are used as much as possible.

“We hire trucking companies to do all of our trucking for us. All of it is local guys. Some guys have their own trucks. One company comes in and hauls manure, they haul haylage, they haul corn, they’re good boys, too. And if somebody buys a private truck and wants to haul for us, we’re all for it.”

Hay is also bought locally and not grown on the farm.

A pet peeve of the whole family is being accused of being a “factory farm” because of the farm size.

“I get so angry,” she admits. “All of my kids are here. You can come here any day of the week and you can find my whole family here. All three of my children came back from college to be here.”