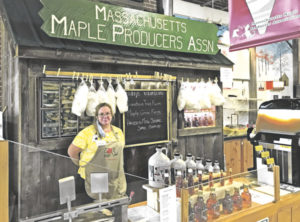 Move over, cream cheese. Maple cream is gunning for your spot at the kitchen table.

That was one of the main bits of information being passed on by the Massachusetts Maple Producers Association (MMPA) to visitors at the annual Eastern States Exposition (the Big E) in West Springfield, MA.

Founded in 1947, the MMPA is dedicated to the preservation and promotion of maple sugaring in Massachusetts. The association has nearly 200 members and represents most of the commercial and hobbyist sugarmaking in the Bay State. MMPA members’ operations range from large scale businesses to single person entrepreneurships.

Heather Lavonte runs a small sugarbush, Harris Mountain Sugar Shack, out of her home in Granby, MA. “I’ve been doing this since I was a kid. I love it,” she said. Calling hers a “bitty bucket operation,” she has no employees, working only with her husband. Diminutive size, however, has not stymied her success. “We’ve conducted all of our sales through social media, and we sold out in three days!” The demand for maple syrup and its value-added products has Lavonte looking to expand. She is currently busy making plans to erect a roadside shack at the edge of her property to better expand into onsite retail sales.

For members like Lavonte, joining the MMPA provides an opportunity to learn valuable information about the maple trade. “One of the things we’re trying to teach guests here [at the Big E] is that there are different grades of maple syrup, and they’re all used for different things.”

For years, maple producers throughout the U.S. and Canada had differing labeling systems for their various grades of maple syrup. In 2014, the industry collectively developed a new labeling system, one that is consistently applied across North America:

Golden: Hallmarked by a delicate taste, this light syrup most regularly comes from colder climates and has the mildest maple flavor. Made early in the season, it is most commonly drizzled over pancakes, waffles, oatmeal and yogurt.

Amber: Somewhat darker than Golden, Amber is still a lighter syrup and has a rich taste with a more full-bodied maple flavor. It is mainly made mid-season. This variety is often stirred into cocktails or tea. Amber is also recommended for use as a salmon glaze.

Dark: Having a very brown sugar-like, robust taste, this syrup is for those who prefer a substantially stronger maple flavor. It is a popular ingredient in barbecue sauces used when grilling meats. A solid coffee sweetener, it is also an unconventional pairing for cheese in place of honey.

Very Dark: Very dark is the strongest tasting syrup, and it’s made much later in the season. It’s not typically sold at the retail level for consumer consumption. Instead, it is more frequently sold wholesale to factories and candy producers to make things like maple candy. Ideal for baking, Very Dark is routinely substituted in recipes that call for molasses.

All grades of syrup are the same density and have the same sugar content.

And why should cream cheese be worried? Famished foodies might be looking to switch from savory to sweet. While maple candy, maple fudge, maple cheesecake and maple custard pie were all well received by Big E aristologists, the maple cream was the fairgoers’ favorite.

Also known as maple butter or spread, maple cream is a confection made by heating syrup to 234º F, cooling it to 126º and then beating it until it reaches a smooth thickness. It’s usually made from Amber syrup, and the consistency is light and spreadable – very similar to peanut butter. Its name stems from the fact that it is “creamy” smooth, not because it contains any dairy product (it doesn’t). Maple cream has grown in popularity in recent years and is used to enhance everything from apple crisp and bagels to yellow cake and zucchini bread.

Leon Ripley has owned and operated Maple Corner Farm in Granville, MA, for 37 years. Maple Corner is one of the MMPA’s larger members. The farm also offers cross country skiing, with two snow caps and over 20 kilometers of trails, which on a busy day can draw between 200 to 300 people. “We get a lot of customers at our place,” said Ripley. “And the maple cream is definitely a best seller.”