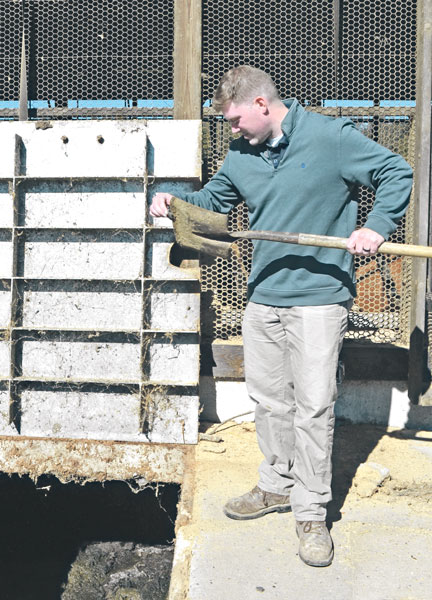 Nearly everyone in the farming community is familiar with the story of three brothers, all in their 30s, who succumbed to manure gas while repairing a pump inside a manure storage pit on their Ohio farm. The story made international news and brought an outpouring of support for the family. Unfortunately, despite ongoing educational efforts regarding the dangers of manure gases, the incident probably won’t be the last of its kind.

Four toxic gases are common on farms: methane, carbon monoxide, ammonia and hydrogen sulfide (the most dangerous). Toxic gases are commonly found in and around confined spaces, which multiplies the potential risk because it’s difficult to get out of these spaces quickly.

Stephen Brown, Penn State farm safety Extension assistant, described a confined space as large enough for someone to get into which has limited means of entry or exit and is not designed to be continually occupied. While many farms are exempt from OSHA confined space standards, those who work on farms are at no less risk of danger and should follow guidance for working in confined spaces.

One particularly dangerous confined space is manure access areas where hydrogen sulfide (H2S) is likely present. When H2S is present at very low concentrations, it’s possible to detect the odor of rotten eggs, but the gas is toxic even at low concentrations and can quickly overcome the sense of smell.

H2S is heavier than air and accumulates in low-lying areas such as manure sumps, pits and possibly in shallow depressions around outdoor manure storage facilities. According to the National Ag Safety Database, H2S is dangerous because it’s rapidly released from decomposed manure during agitation and pumping. At levels above 600 ppm, just one or two breaths of H2S can be deadly.

Become familiar with the early signs of low-level H2S exposure such as discomfort and mild dizziness along with eye, nose and throat irritation. Moderate H2S levels can cause headache, coughing, difficulty breathing, dizziness, nausea and vomiting. However, by the time signs of moderate exposure occur, there’s little time to get out of the area and into fresh air.

Several management factors can increase levels of H2S in manure. Animal diets that contain distillers’ grains can result in higher H2S levels in manure, and the use of gypsum bedding is also associated with increased H2S content. Water with high sulfur content can also contribute to increased H2S sulfide in manure.

The farm owner and managers should work together to develop and implement a written plan that outlines the procedure for working in or around all confined spaces on the farm. Even if only one person is designated to open an access door to manure storage under a building, a written plan ensures everyone is familiar with each aspect of the procedure.

The plan should include detailed protocol for anyone accessing stored liquid manure, whether the access is a door outside the barn or a fenced manure storage area. Designate someone to remain close to the confined space but away from the hazardous area. This person should be present any time the pit is accessed. Ideally, an additional person on the farm should be aware that someone is opening and/or entering a confined space. That person should be familiar with the area where work will occur, who is entering, time of planned entry and estimated time of task completion.

Everyone on the farm should have quick access to critical contact information (fire, rescue, farm owner, manager) and be aware of who to call first in an emergency. Nearly everyone carries a cell phone, and emergency numbers should be on their contact list. If cell service is poor, be sure everyone is aware of areas where cell service is adequate. A card with emergency contact numbers should be kept in every farm vehicle, including skid steers, tractors and trucks. Confined space locations related to manure should have clear warning signs indicating the potential presence of deadly manure gases.

It’s important to remember that more than half of confined space deaths are the result of someone trying to rescue the person who needed to be rescued without having the proper equipment. Ideally, workers should wear a properly fitted harness attached to a safety line. The line should be secured to a stable tripod or a winch so the worker can be pulled back immediately if a problem develops.

Anyone who accesses manure storage should wear a properly calibrated gas meter – even if environmental conditions are not conducive to gas buildup and even if the door is just being opened briefly. Such meters are expensive to purchase and maintain but can save lives.

“The biggest thing is knowing what you’re sampling for,” said Brown, explaining the use of meters. “If you have a meter that measures oxygen and you start to see oxygen decrease below 20.8%, some other gas is occupying the space. For every percent the number decreases, there’s about 5% of some other gas, and is another indication that you’re in a bad spot.” Because a H2S meter may initially indicate low levels and because levels can rise rapidly during agitation, it’s important for the user to continually monitor gas levels and be prepared to immediately exit the area if concentration approaches 10 ppm.

Good meters will track the length of time of exposure and the total exposure in an eight-hour day. Some meters are equipped with a hose attached to a pump, which allows the user to drop the meter down into the pit rather than attaching it to a shovel.

Some gas meters have extra features such as a motion detector that will sense a lack of motion in the event the wearer has shown no movement for a certain amount of time. “If it goes to alarm mode,” said Brown, “it’ll call your emergency contact and let them know the person working in an enclosed space with potential gas exposure is in a high-risk environment.”

In some cases, the initial reading isn’t high enough to cause the operator to take precautions, resulting in a false sense of security. When a crust forms over the manure, there’s a good chance of significant H2S under the surface. Breaking the crust with agitation will release the gas and result in a more accurate reading.

If the manure isn’t handled or agitated frequently, owning a H2S gas meter might be impractical. However, this doesn’t mean the instrument shouldn’t be used. Gas meters are available for rental and arrive at the farm calibrated and ready to use.