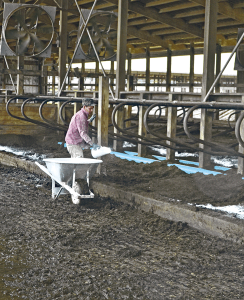 No one wants to be that neighbor – the one who spreads manure with odor that lingers for days. For the owners of Kish-View Farm, an interest in technology and a passing conversation helped solve the odor problem.

As Kish-View Farm grew over the years, each project included positive changes for the family farm operated by brothers Keith and Kent Spicher. Keith refers to himself as the cow man, and his brother Kent handles crops. After a series of herd and facility expansions, the milking string now includes 570 cows.

Like other progressive dairy farmers, Keith has always been involved in dairy organizations, and one connection paid off big. One year at Dairy Summit, hosted by Professional Dairy Managers of Pennsylvania and the Center for Dairy Excellence, Keith talked with others in the industry about manure digesters. Although Keith expressed interest in digester technology, he wasn’t considering installing one at the time.

“A couple years later, they called back and asked us if we wanted a digester,” said Keith, who made it clear that he wasn’t prepared to spend the amount of money a digester would cost. “They said ‘What if it was free?’”

That was in 2010. Keith learned that funding for shovel-ready jobs was available through grants from the stimulus package, and the Chesapeake Bay Foundation was seeking dairy farms interested in adding a digester.

The digester offer came at the right time. Kish-View Farm is situated at the edge of Belleville, PA, directly across the street from a 300-bed nursing facility. The dairy was expanding, and although the Spichers were careful about manure handling, they were receiving complaints about odor.

The Spichers worked with the RCM International installation team to determine optimum siting for the digester, and started construction in spring 2011. With several barns on the property, one priority was to ensure manure flowed downhill to the digester. “If someone was building a new facility with a digester in mind, it would be easier,” said Keith. “We already had three of the barns built, which made it a little more complicated. But it does work.”

Despite being a forward thinker who has always embraced new technology, Keith said learning about the digester wasn’t easy. “I knew nothing,” he said, “and I couldn’t call a neighbor to ask them what to do.”

Nearly 10 years later, Keith said the digester pretty much takes care of itself, but he’ll receive a text message if something isn’t right. “I get a text if the engine shuts down,” he said. “It may be something simple – maybe a breaker kicked on the pump that feeds the digester so the digester didn’t get new manure and used up everything in there.” A more complex and urgent situation might be a bearing issue that requires pulling the pump. Keith said in some cases, the most difficult aspect of handling a problem is figuring out what the problem is.

The digester tank holds a half million gallons, and the gen set capacity is 120 kw.

Although some farms with digesters import excess material for digestion, the Spichers have found on-farm manure input is sufficient to keep the system running smoothly. “The gen set is running at capacity,” said Keith. “Manure storage is just about at capacity for the number of cows we have. Importing more liquid that would end up in the pit would cause a problem. I’m not going to make any more electricity than I am now; the flare would just run more.” One electric meter handles electricity exported to the power company, and the others are on the home farm, another farm owned by Spichers, a rented farm and Kent’s home.

Keith found that when he makes a ration change, he can predict how the cows will respond based on the digester. “If I get into a new year’s corn silage and the next day there’s a lot of gas, I’m probably going to lose milk,” he said. “The more efficiently the cows digest their feed, the less leftover nutrients there are for the digester. It’ll take a couple of days for milk production to respond, but the digester responds very quickly.”

Although the Spichers had been bedding with sand, a digester offers the opportunity to repurpose manure solids. The farm’s conversion to using manure solids for bedding was driven by the fact that the digester couldn’t handle sand.

A screw press extracts moisture from the manure and the extracted portion is stored for bedding. Manure comes out of the separator at about 65% moisture, and a fan helps dry the material further. The liquid portion goes to storage and separated solids are composted for several weeks. Keith said there’s no single “best” way to handle solids for bedding, and noted that Penn State ag engineer John Tyson, who is familiar with several on-farm digesters, said each farm handles solids differently and successfully.

Keith said the cows are comfortable in stalls bedded with manure solids. “It dries quickly, especially in summer,” he said. “Our somatic cell count is typically lower in summer than it is in winter. With all the fans on, the bedding is really dry.”

Overall, the separator has proven to be one of the most trouble-free aspects of the entire system. It runs 12 to 14 hours each day and requires minimal maintenance. Keith said he replaces the screen every year and the screw is replaced every other year. However, replacing the engine in autumn 2018 proved to be a big ticket item. The original engine had been operating since 2011 and was worn out after 58,000 hours.

“The digester doesn’t change the volume of manure there is to deal with, but it does take a lot of the odor away,” said Keith. “My neighbors can tell when I’m spreading manure, but the next day, the odor is gone. The community is responding positively. If they see an attempt at reducing odor, that buys us a lot of credibility.”