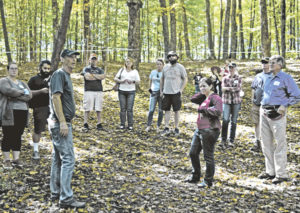 The two-hour tour was organized by program coordinator Laura Angers of NOFA-NH. It was part of a series designed for farmers, farm workers, interns and apprentices under the auspices of CRAFT (Collaborative Regional Alliances for Farmer Training).

When asked why they had decided in 2005 to seek certification as organic maple syrup producers, Meeh replied, “It opens up markets – niche markets – that help us differentiate our maple products. We don’t charge a premium price.

“It might seem as though all maple syrup could be considered organic, but when we think about buckets hanging along a roadside we must remember what road crews spread in the winter and the herbicides and other chemicals sometimes used on the verge,” he said. “Poisons are used to kill rodents, and herbicides to control invasive species … We’re careful to only use organic de-foamers in in our sugarhouse.

“We follow the National Organic Program Rules for production and processing of our maple products,” he continued. “We don’t use synthetic fertilizers or pesticide in our forest. We’re inspected and re-certified annually by the New Hampshire Department of Agriculture, Markets and Food. We also participate in the New Hampshire Seal of Quality program, meeting specific standards for food quality, packaging and labeling that’s administered by the state Agricultural Department.”

Meeh explained that in 1950 his family was able to buy 1,000 acres – the North Family Farm – from the Canterbury Shaker Village after the numbers in this religious sect sharply declined. Many Shaker-built stone walls still mark the property, however, and there’s a view of a Shaker-created dammed lake that once provided water power for one of their mills. Conservation easements have now been laid over most of the property, ensuring it will remain in agricultural use.

The Meeh family, including their sons Tim and Greg, first ran a dairy farm for nearly a decade on their property and then a school, which moved to its own campus in 1974. Since then, Meeh and McCullough, who also raised two sons, Daimon and Gem, on the place, have operated a diverse series of agricultural enterprises. Their forest management skills were recognized in 2011 by the NH Timberland Owners Association when their farm was named the NH Tree Farm of the Year.

Meeh led the NOFA-NH tour from their farmhouse through the sugarbush to their sugarhouse, which, he explained, they’ve enlarged over the years as their number of taps has risen from 500 in 1975 to today’s 2,500. They’ve also substantially changed the maple syrup-making technology they use, improving their products’ flavor and reducing labor and energy use. As enthusiasts of net metering, they installed both solar arrays and a single windmill to generate electricity.

“This forest was a hayfield when my family bought the place, and then white pine grew in and took over,” Meeh explained. “We harvested the pine, and since then, when thinning, we’ve selected for sugar maple and some red maple. Sugar maple is sweeter but red maple produces a greater volume of sap.

Warming weather in early spring makes the frozen maple trees thaw on warm days and then freeze again at night. This cycle creates negative and positive pressure inside the tree. As the tree freezes and its pressure becomes negative, water is pulled from the ground through the roots all the way to the uppermost branches, where the water mixes with the stored sugar and becomes maple sap. When the tree thaws, the tree pressure becomes positive and the sap flows into a sap collection system.

Blue plastic tubing zig-zags from tree to tree as far as the eye can see in this healthy, sustainably managed forest.

A fresh tap hole must be drilled into a maple tree every year, Meeh explained. “The tubing system must be maintained year-round; both red and gray squirrels seem to enjoy the taste of plastic tubing and fittings,” he said. “The more we work in the woods in the fall, the less walking we’ll have to do in deep snow.”

McCullough joined Meeh to show off their cutting-edge sugarhouse. It includes a reverse osmosis system, new evaporator, three fans and a state-of-the-art filtering system, plus an exterior refrigerated tank, which was bought second-hand from a dairy farmer.

The couple recently received two grants for which they applied. One helped them buy the refrigerated tank in which to store fresh sap. This tank, plus other upgrades they’ve made, will allow them to “boil” less frequently and for longer periods, cutting how much firewood they must burn in the firebox to produce syrup by two-thirds.

The return of Meeh’s brother, Greg, to the homeplace has increased the number of retail maple products they can make and sell. Greg established a distillery (Cold Garden Spirits) in a Shaker-built barn across the road from the farm. Greg produced his first batches of corn whiskey and fruit eau de vie in 2016. Now Meeh and McCullough use Cold Spirits’ oak barrels in which bourbon has been aged to create a subtly flavored bourbon barrel-aged maple syrup. Meeh said, “We have separate enterprises, but we collaborate.”