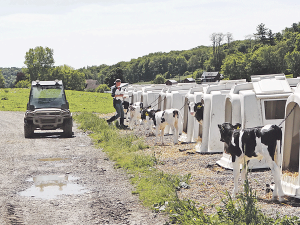 “Sometimes to get where you need to go, it’s best to take the road less traveled,” remarked third generation dairyman Paul Fouts.

Fouts should know. As a dairy advocate he has traveled roads far and wide representing the dairy industry in New York and lobbying with NY Farm Bureau to benefit dairy farmers and all of the Ag industry.

Fouts Dairy was established in Tompkins County nearly a century ago.

“My father’s parents purchased the first part of our farm in 1937,” said Paul, currently NYFB District 5 Director. “Since that time we have grown to around 1200 tillable acres and 500 cows. As with most family businesses, the transition from one generation to the next is not a defined line, but a blur of time that is occasionally messy. To my parents’ credit,” he added, “I was allowed a lot of freedom to make my own decisions and mistakes.”

Fouts said his grandparents and parents made many changes over the years including land improvements, such as installing drainage tile.

“They may not have always been on the cutting edge, but they were not afraid to try and implement new practices,” Paul explained. “Although we have always tried to make good use of our assets, we are now intensely focusing on maximizing our assets to reduce our cost of production.”

Paul said these assets include land, facilities, equipment, employees, and even himself.

“This will mean adding cows, changing our cropping management, changing and consolidating equipment, and utilizing technologies that improve efficiency.”

Some new technologies have already been added to the farm, including Dairy Comp 305 software for herd management, which Fouts said has facilitated herd record keeping, including breeding and vaccination schedules, production levels and other information on herd individuals, as well as keeping general routine job lists and information organized.

A TMR Tracker has also been added and Fouts said it has made a positive difference in managing the feed program.

He admitted the “most exciting” technology for him has been he addition of GPS for field work.

“We started by using autosteer to more accurately spread fertilizer and plant corn. There was a noticeable savings in fertilizer and seed, but also it drastically cut back on fatigue. Last year we started to map where different varieties of corn were planted and their yields. This data, along with feed quality samples, was used in selecting varieties to plant this year. We have just scratched the surface of what this technology can do and will be using it for more things as time goes on.”

Cameras have also been installed for better security and peace of mind.

“We have cameras in strategic places. We can watch for cows calving and employee performance from anywhere with internet access,” remarked Fouts. “This has helped catch calvings earlier — and in identifying where employees need more training.”

Although Fouts said most of the training done is “informal and on the fly,” they also have had New York Center for Agricultural Medicine and Health (NYCAMH) come to the farm and provide safety training for employees. “We cross-train as much as possible.”

In 2018 the farm went to 3xD milking, resulting in increased production per cow

“Part of the 3 times transition was changing cow traffic, which allowed the cows to have more rest time. We changed our calf feeding program last year, as well. This has greatly improved their rate of weight gain. This has huge potential for improved production, but it will be at least another year before we see any benefit.”

In 2017 Fouts built on a manure storage system.

“We had been thinking of manure storage for years,” said Paul, who realizes the environmental benefits. “The CAFO regulations forced us to finally do it. This year we saw the benefit of reduced purchased fertilizer. We should, in time, see a yield benefit from less compaction now that we are not hauling spreader loads around the fields in all kinds of weather and rutting things up.”

“We really had not started to see the benefits until this year. Unfortunately, we definitely have seen the financial strain from the cost of construction.”

Fouts said a few years ago the farm began using a custom crew to harvest their forages.

“We started with corn silage and soon thereafter included haylage. This has greatly reduced equipment replacement and repairs and the need for seasonal labor with equipment operator skills. The main driver for this though was improved forage quality. We could not cover the ground fast enough with our equipment.”

The farm has worked with rye as a cover crop for 5 years and has seen success the past 2 years.

“This has definitely reduced erosion. Between the rye and injecting manure we have been able to reduce — and may eventually eliminate — tillage.”

Looking back, Fouts said some valuable lessons have been learned.

“The milk price crash in 2009 taught me I am not smart enough to do this alone. If I expect that, I am setting myself up for failure.”

At that time he started a farm “Profit Team.”

“The idea is to bring our advisers together and get them on the same page. My job is to identify the experts in the individual pieces of the puzzle, get them together to help develop a plan, and then as quickly as possible implement the plan. That has been my approach, whether with our farm business, Farm Bureau, or anything else. I am slowly getting better at it.”

“Certainly the last 2 to 3 years have been the most challenging in my career. Between the financial problems and the pneumonia outbreak last fall it has been tough.” 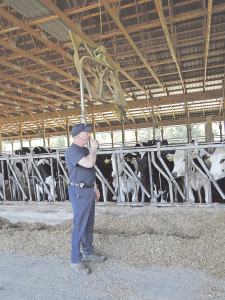 It began in the autumn of 2018 with a heifer that arrived from a farm that boarded their heifers.

“She looked fine coming off the trailer,” Fouts recalls. “After a couple hours she looked sick and had spiked a fever. By the next morning she could not breath and died.”

The illness spread to the fresh cow group, then to other groups.

“The first calf heifers showed no signs, but the whole herd dropped 7 pounds of milk, so I am sure they were fighting it too.”

Cows that appeared fine, “suddenly spiked a fever, blew a lung and died. We were taking temps of cows to try to catch it early but were not successful. Antibiotics had no affect.”

Throughout the devastation, Fouts worked closely with the farm veterinarian and under her advice sent four dead cows to Cornell for necropsy.

“We also took nasal swabs and blood samples and sent them to Cornell for analysis. Our vet conferred with people at Cornell, Kansas State, and Wisconsin. The final diagnosis was Mannheimia pneumonia. We were advised to vaccinate everyone. A couple weeks after we vaccinated it was under control and milk production slowly came back.”

The episode lasted nearly 2 months, with a loss of 30 head.

“I recommend everyone with cattle have a conversation with their vet about vaccinating their cows for Mannheimia,” advises Fouts. “Prevention is worth every penny.”

With all of the talk about animal abuse on farms over the past few weeks, Fouts said he knows two things to be true. “One, no dairy farm can be successful without giving the best care possible to the animals in their care. Two, no matter who you are or what you do, if someone who is secretly intent on destroying you — and everyone like you — follows you long enough, they will eventually be successful because nobody is perfect.”

Paul advised farmers to tell their own story before someone else tells it wrong.

“Despite public opinion,” Fouts said, “if you’re truly doing the right thing, flaunt it. If not, change it. Stop exploiting public opinion to market against each other.”