Making a profit off Charity Hill 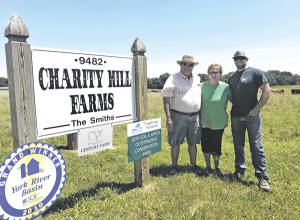 At age 26, Chris Smith feels very fortunate to have found his niche early in a profession he loves – working the family’s 1,100-acre operation, Charity Hill Farms, just north of Richmond, VA. A 2012 agricultural technology graduate of Virginia Tech in Blacksburg, Smith rises before dawn to meet the day’s tasks, especially in the summer, when daytime temperatures may reach the 90s, coupled with Virginia’s well-known, stifling humidity. Tasks may range from cutting hay and artificially inseminating heifers to marketing beef at a local farmers market. Days are never the same, which keeps things interesting, he noted.

Smith works in partnership with his mother and father, Cindy and Steve, to produce beef from two herds of cattle, corn, soybeans, small grains, hay and cover crops on a farm that has been in the Smith family since 1854. His sister, Dr. Kendal Smith, is a veterinarian in Nebraska.

“I guess it’s every kid’s dream to work with their family every day,” said Smith, who has spent his entire life, except for his time at Virginia Tech, at Charity Hill. “There’s no typical day. You spend time on the tractor, checking cattle, fixing water lines” – the list of chores seems endless.

With 220 head of cattle, the farm is located on winding Golansville Road, a few miles southeast of Ladysmith. An Antebellum home has barns and silos off to its right. It’s a peaceful, picturesque place reminiscent of “Gone With the Wind.”

Originally known as Hamptonville, and later Smith Dairy Farm and a hunting preserve, the name Charity Hill is relatively new. When Steve Smith’s father, Floyd S. Smith Jr., went to purchase an additional five acres a few years back, the seller told him, “As poor as that land is, you’ll need charity to get anything off of it.”

Cattle herds consist of Balancer (Gelbveh/Angus cross), Red Angus and Hereford, selectively bred with AI to get the best calves. They started retailing beef two years ago, grown through a meticulously managed rotational grazing system until 18 to 20 months of age and finished in the barn on a grain ration for the last 30 – 35 days before slaughter in nearby Fauquier County for the commercial beef market. All the farm crops are no-till, eliminating most erosion and preventing pollution of the Chesapeake Bay watershed downstream.

Finishing the beef destined for the dinner table on a ration of rye, wheat, cow peas and clover plays a vital role in meat tenderness, according to Smith. There is a definite difference in flavor and quality, he added.

The Smiths have a lot of return beef customers, he added. “People today want to know where their food comes from. I don’t blame them. It takes time to build a relationship with your customers. I want to connect with consumers,” he said.

The 2019 Virginia Agriculture Expo, the state’s annual showcase for producers, exhibitors, businesses and vendors from throughout the commonwealth, will take place this year at Charity Hill Farms in Ruther Glen, VA, on Thursday, Aug. 1.

The expo, managed by John W. Smith, is sponsored by the Virginia Grain Producers Association in Richmond. For more information on Charity Hill and the Ag Expo, call Chris Smith at 540.848.5456. The expo is free and open to the public, featuring equipment dealers, agricultural exhibitors and food vendors.

Charity Hill also hosts a number of festivals and events during the year, including an annual sunflower festival, wine tastings and weddings.

“Come visit, get something to eat and have a good day,” Smith said of the Expo event.