Make way for the heifers 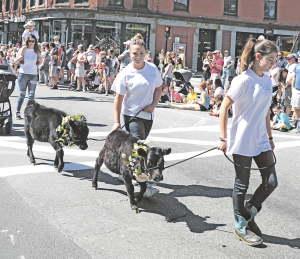 Organizers work all year long to bring the world renowned Strolling of the Heifers to Brattleboro, VT. Every year, people throng the sidewalks to watch calves and heifers stroll through town in honor of all farmers and the hard work they do, and to connect people firsthand with the farmers and the source of healthy local food throughout the region. As “Farmers Are Our Heroes” was this year’s theme, many of the cows and strollers alike wore caped crusader costumes or capes. Children at the end of the parade were also adorned with capes, emulating superheroes.

“There are people who like to say 50,000 people attend. I like to say tens upon tens upon tens of thousands of people,” said Orly Munzing, Stroll founder. The first parade occurred in 2002. This year spectators arrived as early as 8:30 a.m. to set up their chairs for the parade on Saturday, June 8.

The jam-packed three-day weekend featured a street festival on Friday night with a wide assortment of food vendors from Orchard Hill Breadworks of Alstead, NH, to Brattleboro’s Green Mountain Creamery and more.

The two-day Slow Living Summit Conference featured 16 panels focused on the future of women and food entrepreneurship. “The focus was on women entrepreneurs. Topics covered were how to get money for new businesses or more funding,” said Jennifer Brandt, conference coordinator, among other issues. Panelists described their career journeys, including former Vermont gubernatorial candidate Christine Hallquist. Geared toward farmers and people working in the food industry, speakers included Whistlepig Distillery Manager Emily Harrison, keynote speaker and principal founder of Breakthru Beverages Charles Merinoff, Vermont Secretary of Agriculture Anson Tebbetts and many others. 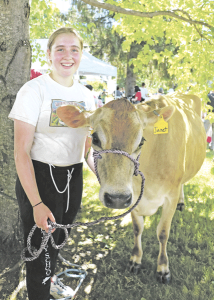 On Sunday, bicyclists chose from 15-, 30- or 60-mile rides along scenic dirt roads during the Tour de Heifer. Proceeds from this tour benefited the Farm to Table Apprenticeship Program.

Also on Sunday, six farms – the Bunker Farm, Scott Farm, Full Plate Farm (all in Dummerston), Rebop Farm and Robb Family Farm (in Brattleboro) and the Miller Farm (in Vernon) – opened their businesses for farm tours.

The three-day event helps fund programs overseen by the Stroll’s non-profit organization, including Windham Grows, a six-month farm and food business accelerated program that provides mentorship, resources and support to increase the growth of existing businesses. It also helps fund their 12-week Farm-to-Table Culinary Apprenticeship program which trains unemployed or underemployed members of the community in the culinary arts with the goal of placing them in long term jobs at local restaurants and institutional kitchens. It also helps fund the River Garden, the Stroll’s headquarters in downtown Brattleboro. This month, artist Amber Bessette’s artwork featuring young women in farming and Steven Meyers’s ink renditions of old farmsteads were River Garden’s featured works.

And then there were the stars. It was the Putney School sophomore Thea Mundy’s first time walking in the stroll. She had traveled a long way – all the way from Denmark – where, she said, “we don’t really have cows in the city.” She has been a Putney School student for three months, and her father attended the school 50 years ago, and her sister 10 years ago. “Barn is mandatory for a credit,” she said, but only one shift is necessary to fulfill credit requirements. Mundy likes it so much, she works both morning and evening shifts. Her heifer was a Jersey named Janet. 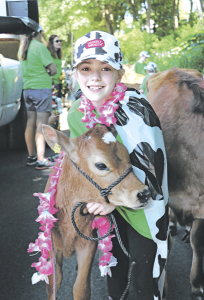 Sara Dunbar works at Putney School. Her daughter Annika Dunbar is 10 and is too young to attend the school yet, but might attend in the future. Annika walked a Holstein calf named Hada.

“We enjoy it. This is a lot of fun right here – people get to interact with animals on a shady common. Former students were watching from the crowd,” said Peter Stickney, farm manager of Putney School for 22 years, who has been involved with the Stroll since its beginning. “It’s amazing how many people come out.”

Abby Jarvis from Langdon, NH, is a member of Walpole’s Pinnacleview 4-H Club in New Hampshire. She strolled with her calf Ginger. Another Pinnacleview 4-H club member, Savannah Anderson, walked her two-month-old Jersey calf Tweety. “I liked seeing everyone come out and be so supportive, and having everyone watch the cows,” she said.