Looking at what’s next in North Carolina farming 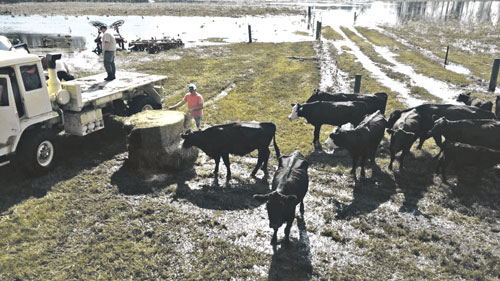 North Carolina sometimes appears to be one of those Goldilocks states – situated right in the middle of the Atlantic seaboard, offering long growing seasons and fairly temperate winters. It is one of the nation’s most productive producers of both crops and livestock.

But what comes next for the Tar Heel State? What does its 2019 look like?

North Carolina ranks first in the nation in poultry and egg cash receipts, tobacco and sweet potatoes, second in hogs, pigs, turkey and trout, third in strawberries and fourth in broilers, eggs and pumpkins.

“Agriculture remains our number one industry,” Overton said. “Agriculture and agribusiness represents a nearly $87 billion industry in North Carolina, which includes food, fiber and forestry. It is our state’s leading industry and leading employer.” She added that agricultural exports are a significant contributor to the state’s ag economy and will continue to be equally important going forward.

In addition to a thriving domestic market, the state is also focused on growing its international markets. Totaling $4 billion, agricultural exports are significant to North Carolina farmers and the farm/rural economy.

“It’s important to remember that 95 percent of the world population lives outside the United States,” Overton stated. “Growing international markets will continue to be important.”

The crops and markets have grown over the past year, and there is a strong push for new and emerging crops. “We are working on a New and Emerging Crops Initiative in partnership with NC State University and NC A&T State University. This initiative would look at crops that hold significant market potential for farmers,” Overton said. “Hemp, hops, malting barley and stevia are just a few crops that farmers have shown interest in that may hold potential. These crops are being grown in limited quantities already, but we need to learn more about their potential returns, production challenges and marketability.”

This is the second year farmers in North Carolina have been able to grow industrial hemp and interest has been strong. As of Oct. 22 there were nearly 6,133 licensed acres of hemp grown by 393 licensed growers. Interest in this crop will likely continue to rise.

North Carolina is one of the most diverse states when it comes to types of crops grown, according to Overton. This is likely due to the state’s distinct climate regions and varying soil types across the state.

One other success in 2018 has been the growth of the NCDA&CS Agricultural Sciences Center. This summer, the department broke ground on a new 220,000-square-foot lab complex. The $107 million center replaces facilities used by the department’s Food and Drug Protection, Standards, Structural Pest Control and Pesticides, and Veterinary divisions. The labs conduct tests pertaining to food safety, animal disease diagnosis, weights and measures calibration and motor fuel quality. This lab will offer services to agricultural and consumer services sectors.

Tariffs and trade agreements are affecting farmers across the country, not just in North Carolina, but the issue still looms large here.

“We value the trading relationships we have worked to build over the years, and we want to continue to strengthen these and other trade partnerships,” Overton said. “We want our farmers to have access to markets outside our borders.”

She provided a “snapshot” of North Carolina’s trade with China:

“If these markets are reduced or go away completely, you would likely see commodity prices drop as these products look for other markets. Low prices would affect all farmers,” Overton stated.

Another problem facing hog farmers this year were nuisance lawsuits.

The pork industry is the second largest segment in North Carolina agriculture, with $2.1 billion in cash receipts. The industry supports 46,000 full-time jobs in the state, and there are 2,100 hog farms here. “Every one of these farms represents a small family business that is proud of its role in feeding their neighbors and the world. It is also one of the most regulated industries in our state,” Overton said.

There is no doubt that the fallout from Hurricane Florence will be felt for months or even years to come, but the Agricultural Disaster Assistance Program of 2018 will directly assist farmers who suffered losses to commodities planted but not harvested before Sept. 13 and livestock. The NCDA&CS will administer the program, and assistance will be dependent upon funding from the General Assembly. More than half the state’s 100 counties have been declared Presidential Disaster counties. These affected counties represent 72 percent of agricultural production in the state.

Agricultural Commissioner Steve Troxler stated, “Hurricane Florence was a catastrophe that hit agriculture at a time when historically high debt, previous disasters and chronic low commodity prices have already created a dim outlook for farmers. Because of this storm, many areas of North Carolina’s ag economy have run out of gas and we need to get the engine started again in rural NC. I am concerned that some of our farmers will choose not to return to the fields next year and we are going to do all that we can to encourage them to do so. If funded by the NC General Assembly, this program will provide much needed cash flow to maintain agriculture and its multiplier effect for rural economies.”

Commissioner Troxler is eyeing growth going forward. He is confident that agriculture can build on its strengths and grow to be a $100 billion industry in the state. He also has a goal of continuing to preserve farmland for future generations.

“This has been a goal of Commissioner Troxler since 2005,” Overton said. “Since the development of the Agriculture Development and Farmland Preservation Trust Fund in 2005, 14,506 acres of family farms have been preserved. Currently, we are partnering with the military through the Sentinel Landscapes program to preserve even more land. Commissioner Troxler is encouraged by our partnership with the military.”

She said that recently the department signed the first two joint conservation agreements involving the U.S. Air Force. Under the agreement, they were able to protect more than 800 acres of farmland, protecting that land as working lands for generations to come and also helping to maintain military readiness.

One other goal for the near future is creating the Food Processing Innovation Center. According to Overton, the goal of this facility is to attract new food manufacturing opportunities to the state. This 10,000-square-foot center would be a state-of-the-art GMP-certified facility with an FDA-regulated system of controls to ensure a high level of quality at every step.

“We envision this facility using new food technology from our universities to fine-tune food processing capabilities in a commercial way,” Overton explained. The center will be located at the NC Research Center in Kannapolis.