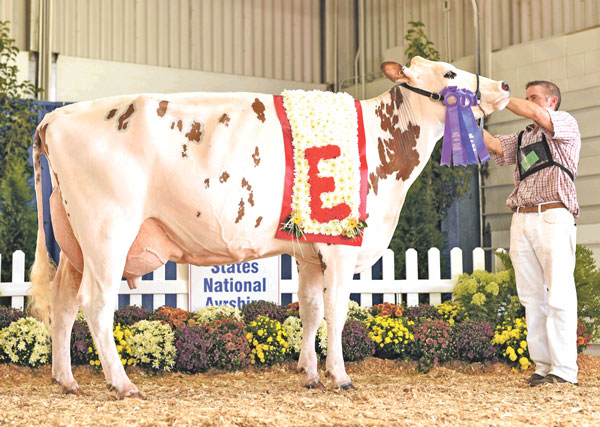 The Ayrshire cow is a breed of dairy cattle which originated from Ayrshire, a county in southwest Scotland. It is a medium sized breed, prized for its high milk production. These cattle generally have red and white markings, though the red coloring can range from a bright orange to a much darker brown. The breed is regarded as extremely hardy, marked by its easy calving and substantial longevity.

The event was staged in the Mallary Center at the Big E, the nation’s only multi-state fair, in West Springfield, MA. Campbell McOuat, an Ayrshire breeder from Brownsburg-Chatham, Quebec, Canada, served as the competition’s judge. Awards were handed out by Samantha Riopelle, the Massachusetts Ayrshire Princess.

Riopelle is a recent graduate of SUNY Cobleskill, where she earned her degree in dairy management and production. She has been reigning as Ayrshire Princess for five years and has extensive experience in showing the breed in her own right. In her opinion, this event stands out as a premier opportunity for breeders and showers. “It’s one of the largest shows for Ayrshires in the Northeast. There are a lot of really great competitors here. They come from all over,” she said.

Davenport works as a scientist for Pfizer, focusing on drug safety research and development. He has been breeding and showing Ayrshire cattle for over 30 years. He said that he is extra fond of the Big E and has not missed a show there since 1972. “This is the first Grand Champion for me personally, so it’s really satisfying. It makes all the work we’ve put in worth it,” he said. Although this was the first time he has taken home the Grand Champion title, Davenport has an impressive performance record at the Big E. He won Reserve Junior Champion Ayrshire in 1993, Junior Champion Ayrshire in 2015 and multiple Herdsman’s Cane Awards in both the Ayrshire and Holstein divisions over the years.

Ennis, who co-owns the Grand Champion with Davenport, described the results as “a dream come true. This one [Kingswood Double Barrel Sunshine] is very special. I had a good feeling about her. We’re very proud and couldn’t be happier,” she said.

Davenport said this entry has a bright future ahead of her, and he has no intention of slowing down. “I’m going to keep at it. It’s what keeps me from taking a real vacation, but I love it.”