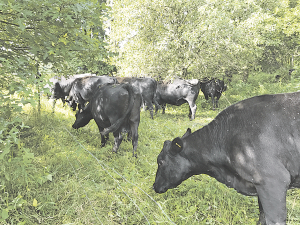 When livestock are grazing, providing shade keeps them cool and productive. Shelter, to protect from precipitation or extremely cold temperatures, is sometimes needed. Pasture forages must provide the needed nutrition, in enough abundance, to promote daily gain and animal health. Silvopasture systems can meet all of these needs while producing another crop from the land and enhancing resiliency in livestock farming systems.

Gabriel Pent of the Southern Piedmont Agricultural Research and Extension Center at Virginia Tech shared research on silvopasture systems in both sheep and cattle production in a recent webinar from the Savannah Institute, a nonprofit organization devoted to the study of agroforestry.

Silvopasture systems are designed to “maximize the positive interactions between trees, forest and livestock,” Pent said, and “provides an opportunity to give relief to livestock” during temperature extremes. Animals kept comfortable – not too hot, cold or wet – can put their energy into production, be that meat or milk.

In a study comparing open pasture, black walnut silvopasture and honey locust silvopasture, no difference was seen in the average daily gain (ADG) of meat breed sheep. The study, conducted in Blacksburg, VA, found little difference in the nutritional qualities of the forages in the three systems, although forage yield was slightly lower in the silvopasture systems than in open pasture. Blacksburg has a moderate summer climate, with daytime high temperatures reaching no more than 90º Fahrenheit, while cooling off below 50º most nights.

The study was repeated five years later, after the trees in the system were thinned by one-third. Forage yield decreased by about 30% in the silvopastures compared to the open pasture. No changes in forage neutral detergent fiber (NDF) were found, and the silvopasture forage had a slight increase in protein. There was no difference in ADG between sheep in the three pasture systems.

The hypothesis is that increased animal comfort in the silvopasture systems compensates for the decrease in forage yields, allowing the animals to gain weight while consuming less quantity of nutritionally equivalent forages. Another three-year study pasturing sheep during the summer in the three pasture systems included data on core temperatures, used time-lapse cameras to record the movements of the sheep and calculated gain.

“Throughout all three years, land in the silvopasture did just as well or better than lands in the open pasture,” Pent said.

Wool sheep were grazed the first two years, and hair sheep the final year. With the wool sheep, grazing occurred evenly throughout the day in the silvopasture, while sheep in the open pasture grazed only during the morning and evening. The hair sheep, which are more heat resilient, did not show this preference, grazing evenly in the open pasture system.

Sheep in the silvopasture systems had fewer parasites than those in the open pasture, possibly due to tannins in the forest browse, which can combat parasite infections. The sheep were also less stressed due to the availability of shade, where they spent most of their time during the heat of the day.

In both the black walnut and the honey locust silvopastures, time budgets showed the sheep spent 90% of the daytime hours in the shade. They also spent two more hours each day lying down than in the open pasture. Standing allows air flow to offer some cooling effect, but it also requires energy expenditure.

In the Piedmont region of Virginia, a 40-acre replicated study of loblolly pine and hardwood silvopastures, with an open pasture control, was conducted in 2017. The open pasture yielded a slight bit more forage than either silvopasture, with no difference in nutritional quality.

Daytime high temperatures reached above 105º for a week during the study, and the nighttime cooling effect was limited. In the open pasture, the month of June saw a 50% decrease in gain compared to the animals in the silvopasture system. In October there was no difference in ADG.

The cattle were “not quite as heat resistant as the sheep,” Pent said. Even so, there were “substantial differences in terms of the heat on animals” in the open pasture versus silvopasture. The loblolly pine silvopasture had less of a cooling effect on animal temperature than did the hardwood silvopasture.

Tall fescue, which does well in Virginia and is a predominant pasture species, can harbor endophytes which produce toxic vaso-constrictive chemicals, causing blood vessels to shorten. This means the animal can’t efficiently pump blood, causing frostbite in cold weather and heat stress during warm temperatures.

A sampling of 21 pastures in Virginia showed that at least 70% contained a significant amount of tall fescue with toxin producing endophytes. A 2015 University of Kansas study has shown differences in toxic and non-toxic tall fescue impacts in open pastures or silvopasture systems. Grazing toxic fescue in a silvopasture system had better animal performance results than when it was grazed in an open pasture.

Pent examined whether the pods of the honey locust in a silvopasture system would provide a palatable and nutritious forage for sheep. The nutritional value of the pods was determined to be equivalent to that of whole ear corn. There were 4,300 pounds of pods per acre, while an average whole corn yield for the state of Virginia would be about 13,000 pounds per acres.

“These trees, on 40 by 40 foot spacing, produced 30% of the nutrients of conventionally monocropped corn, even while the forages underneath these trees produced the same amount of forages as forages in the open pasture system,” Pent said.

After removing the sheep in August in order to stockpile the forage and the pods, the animals were returned to the pasture for six weeks in autumn. During the first four weeks, they did not eat the pods. The last two weeks, however, they did consume them. There was little difference in animal performance between the silvopasture and the open pasture until the pods were consumed, and lambs in the honey locust silvopasture increased their ADG in comparison to those in the open pasture system without access to pods.

“The end result is to create not only a diverse landscape to produce multiple products and (which) can enhance ecosystem resiliency, but also can improve welfare of livestock, and us as well, as we work in these types of systems,” Pent said. “Trees can have a substantial impact on animal performance.”