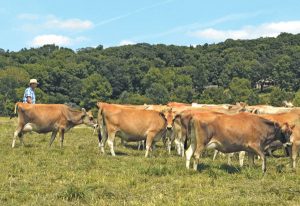 Generational dairy farms make changes over the years, but Ron Holter has made changes that took the family farm in a new direction.

Holterholm Farms was established in 1889, and until recently, Holter operated the Jefferson, MD, farm like many other dairies – raising crops, milking Holstein cows and producing milk year-round. That changed in 1995 when Holter switched to rotational grazing.

Holter said there wasn’t a lot of information about grazing at the time, so he looked to New Zealand, where seasonal grazing is the norm. “We planted the entire farm in a pasture mix,” he said. “We haven’t re-seeded anything except a couple of acres since 1995.”

Two years later, Holter switched to a spring seasonal management system, and that’s also the year he added Jerseys. “We sold all of our fall-calving Holsteins in the fall of 1997 and bought Jerseys to calve in spring,” he said. “The Jerseys stuck around and the Holsteins left.”

As he fine-tuned his rotational grazing program, Holter realized he wasn’t using any herbicides or pesticides on the farm, so it made sense to consider organic production. Although there was no market for organic milk in Maryland in 2000, Holter farmed the land organically while feeding conventional grain. Five years later, Organic Valley moved into Maryland and Holter contracted with them. The farm became certified organic on July 1, 2005 – the same date Holterholm Farms’ first organic milk went on the truck.

Holter started experimenting with raising calves on nurse cows in 2006. In 2007, when prices for organic grain rose, he stopped feeding grain in autumn. Holter said that at the time, New Zealand wasn’t feeding grain to cows, and he figured he didn’t need to either.

Today, Holter and his son Adam farm 310 acres in organic production, with an additional 40 acres in transition for certification in July 2021. The herd of 140 is bred for spring calving, and about 35 cows are designated as nurse cows. Since 1998, all replacements have come from within the herd. Holter has a very specific cow in mind when he thinks of the ideal, so he raises his own bulls to ensure offspring meet his standards.

Holter said the principles for the ideal cow are similar for beef and dairy. “We want a large, capacious belly on these cows,” he said, adding that rumen capacity is his top priority for a good grass-fed cow. “The rumen has to be large enough to take in high amounts of forage so she can process that forage into milk. She has to have strength, and has to be able to carry herself well.”

Since Holterholm Farms is a seasonal operation, it’s important that cows accumulate ample body fat by autumn for winter reserves. Holter selects cows with wide front ends so there’s sufficient room for essential organs, and a wide rear for udder support. Another requirement is brains – Holter wants intelligent cows that respect fences and eat well to meet their nutritional needs. Good feet and legs are important, but Holter said less than optimum feet and legs do well in a grazing situation because animals are in a natural environment and not on concrete.

“Being in shape keeps them healthy,” said Holter. “Athletes can bounce back quicker. We want a ratio of 60% body and 40% leg. The longer the legs, the higher body maintenance is. Fifty-fifty cows are always thinner and never carry the body condition and never breed back as easily.” Cow color is also important – light-colored cows are better equipped to handle heat.

Holter said epigenetics (phenotype changes unrelated to DNA) are at work when it comes to raising cows best suited for grazing. “If you want to be a no-grain dairy, the calf needs to be started without grain and continue its entire life without being fed grain,” he said. “And when I say grain, I also mean corn silage. If your goal is to go grass-fed, I’d start with calves, and as those girls calve for the next generation, you’re going to be much further along than if you stop feeding cows grain and continue to feed calves grain.”

One livestock concept Holter upholds is the selection of excellent bulls. “Pre-grazing, I liked a good bull,” he said, “but I was so into cows that I wanted a heifer out of every cow. I’ve come to realize that if I have a tremendous cow, I’d much rather have a bull out of her because if I use that bull on my cows, his mother is going to have greater influence in my herd than any single heifer calf out of her.” Holter added that if dairy farmers have cows close to what they want, selecting a bull based on numbers won’t result in suitable offspring.

When Holter started breeding for grazing type, he line-bred using Beladene Dukes Landy, an A2A2 New Zealand Jersey bull that stamped the herd with outstanding traits. In 2007, after his ideal herd started to take shape, Holter collected from his own bulls. The first bull he collected was Lieutenant P (polled), and in 2008, Holter started to focus on A2A2 genetics. In 2018, Holter developed the farm’s first bull book and started to advertise bulls.

Holter’s cows are bred AI using mostly homebred bulls, with the occasional addition of other Beladene genetics. A clean-up bull handles cows that aren’t settled via AI. Shortly after birth, calves are separated into two groups (bulls and heifers) and raised on nurse cows for six months. Holter said calves wean easily and enter the milking string ready to go. Per cow production average is 6,000 pounds, with 5.2% fat and 3.8% protein.

While some grass-based dairy farms use a crossbreeding program, Holter believes it makes more sense to stick with excellent bulls in a purebred program. While some crossbred animals will be highly desirable, in general, the herd will vary greatly. “When you stick within a breed, typically you get closer to the bull’s-eye,” said Holter, “but still have a fair bit of random genetics that will take you outside the ideal and you’ll have disappointment.”

Holter said that if the true goal is grass-fed, farmers should use only bulls from 100% grass-fed lineage, which eliminates conventional AI bulls. Prepotency is also important, and Holter started incorporating such sires through line breeding in 2006. “Prepotent means the calves look alike, and that’s what we want in sires,” he said. “We want the sire to stamp his offspring – that’s the purpose of line breeding. Like begets like.”