Lightland Farms holds its own at World Dairy Expo 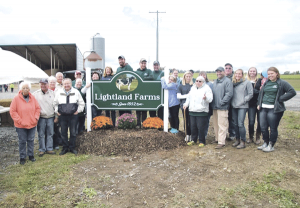 When a family farm in a small hamlet of upstate New York is recognized for the quality of its work, that’s commendable. When that farm finds itself going toe to toe with some of the farming giants from the Midwest, and still winning awards, that’s all the more remarkable.

Lightland Farms garnered 5th place in the BMR competition, which was otherwise populated by much larger farms from Ohio and Wisconsin.

“We’re very happy with the results,” said Fred Lightfoote, Lightland’s field and equipment manager. “In 2010, we were first in the standard corn silage category. Now we’re focusing on Brown Midrib, which is more digestible than standard corn silage. BMR has been around for the past 60 or 70 years, but it’s really picked up in the last 20… We’re really proud that we’ve done well in this category.” Lightland is now one of the leading BMR corn silage producers in New York State.

Originally founded by Fred’s great-great-grandfather in 1852, Lightland Farms was largely a subsistence farm in its early years. It has grown considerably during the tenure of its later generations. Fred’s father began focusing on dairy production after World War II, starting with 50 cows. Today, Fred and brothers Russ, the general manager, and Larry, the herdsman, oversee an operation boasting a herd of 650 cows on a plot of over 1,400 acres of land with 11 employees. Lightland’s milk is distributed through the Dairy Farmers of America. “We’re very busy. We have three milkings a day, and each of our cows produce an average of 27,500 pounds of milk a year,” Fred said.

Looking toward the future, Fred would like to pursue building a new barn, but “that depends a lot on the dairy market, which is so volatile right now.” He said the family’s ties to the area run deep. He has served as a town supervisor in nearby Gorham for eight years. The Lightfoote family is a fixture in town.

“Two of my nephews, Blane and Chad, are working here and make the sixth generation of our family to work this farm. We also have Jake Spoor working here now. The Spoor family has been close friends with ours for at least three generations, so Jake is about as close to family as you can get… We have a lot of good people working here,” Fred stated.