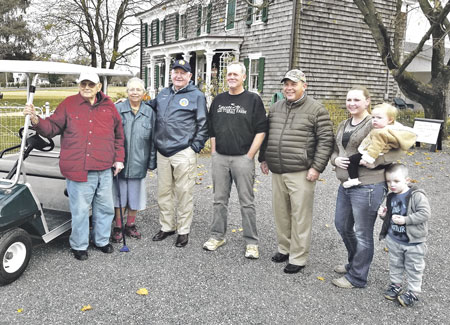 Seven generations have tilled the soil at Lee Turkey Farm, working the land since 1868. This year, the farm celebrates its 150th anniversary and another year providing their neighbors from both near and far with quality birds for their holiday meals.

Located in suburban East Windsor, NJ, Lee Turkey Farm was started by the current operator’s great-great-great-grandfather just after the end of the Civil War. Today, Ronny Lee, his wife Janet and his son Dylan keep the business going. Ronny and Dylan work the 54 acres of land and raise the livestock; Janet runs the farm market.

“This farm started like most. It was self-sustaining. But things changed, and at one point we were half orchard, growing apples, pears and peaches,” Ronny Lee said. “What changed the farm dramatically was the year my dad got involved with 4-H. He was 11-years-old, and the only club with room for him at the time raised turkeys, so that’s what he did. He started with 33 turkeys, which were New York dressed, heads and all. He sold them to neighbors. By high school, he was raising 400 to 500 a season.”

His father, Richard, really wanted to farm after serving in World War II, but the post-Depression market had led to his father owing a considerable sum of money – so he started raising turkeys by the thousands instead of the hundreds. The scheme paid off, literally. They were out of debt in two years. They sold their turkeys mostly to small markets and Mom & Pop stores, but then the market changed. They adapted. They started dressing the turkeys themselves and selling them directly to customers.

The farm still grew crops and fruit trees during this time, but in 1964 Richard Lee realized the fruit auctions in the region had become corrupt, with bidders colluding beforehand to save themselves money rather than pay a fair market price to the growers. He read a story about a cherry orchard in Michigan that had begun its own you-pick operation, and so Lee Turkey Farm followed suit starting in the spring of 1965. Pick-your-own was very new to New Jersey at the time. At one point in the 1970s, they had nine acres of strawberries.

When Ronny was in high school, Richard gave him one acre to plant his own produce. By graduation he had eight acres. “I asked him if we could be partners. It was a conversation over Thanksgiving supper,” Ronny said. “He asked if I had machinery or capital, and I said no. He said ‘Then what do I need you for?’” The next year, Ronny’s mother pointed out that her son had made more profit than his father that year, so they agreed to partner, two-thirds to one-third.

Today, the farm is split into thirds as well, evenly divided between growing vegetables, growing fruits and raising turkeys. 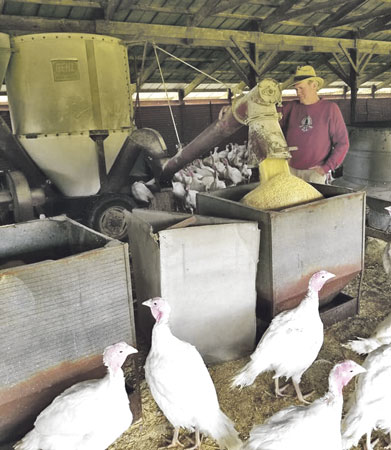 “We prefer to sell our turkeys ourselves. There’s much more quality control that way,” Ronny said. They raise around 3,000 turkeys a year now, feeding them only corn and soybeans. They don’t use antibiotics or growth hormones. Ronny explained the birds need to start with good bone structure, and so they feed them soybeans first. They finish them with corn, as that adds flavor and juiciness.

Ronny said his farm processes all of its turkeys in 10 days. “We get in, we get out,” he stated. “There’s still a little room to expand our orchards. Pick-your-own is so big right now, and we can’t do much more with our turkeys.”

Many of the buildings on the barn are originals, or were built in the 19th century, but that’s a boon, according to Ronny. “We may have a primitive processing plant but we have the cleanest birds,” he boasted.

Lee Turkey Farm makes sure they age their birds at least 48 hours before they are flash frozen. “If you take out the aging part, you miss an important step,” Ronny said. “Aging it a few days breaks it down to make it more tender.” He explained that in a normal freezer, it can take hours to fully freeze something, and in that time ice crystals can form between the fibers of the meat, “breaking” the fibers and forcing the juiciness out of it.

“We concentrate heavily on flavor,” he said. “Aging the meat and then flash freezing it means you keep all of the nutrients and juices inside of the turkey.”

They still sell their turkeys directly to the public, and this year has been another good year for the Lee family. They take orders ahead of time, but most of their customers are walk-ins. Ronny swears they’ve never sent someone home without a turkey.

“We can predict a good year based on the size of the turkey people are buying,” he said. The economy plays a large part. “During the Carter years, people were buying 17 or 18 pounds. With Reagan, it jumped up to 28 pounds. We had good times with Clinton too, before the tech bubble burst. Then the sizes stayed a little smaller due to trends in society.” Ronny said the “Trump Bump” has been real too – in 2016, they jumped from an average 19 pounds to 26 pounds. The bigger turkeys were in demand last year, and the farm is seeing the trend continue with this year’s turkeys too.