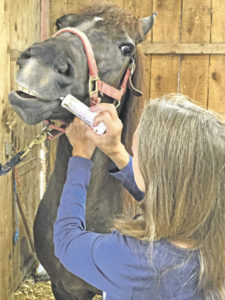 This past year has been a difficult one for our 17-year-old mare, Morgan. Back on May 22, 2020, we lost our 36-year-old mare, Sabrina. For the very first time in the seven years since she’s been here, Morgan was suddenly the only horse. I was concerned about how she’d fare; even though she had been the food-dominant horse, she would definitely depend on Sabrina for her guidance, such as what to do in a thunderstorm or how to handle new situations. She was much larger (heavier) than Sabrina and so it would be comical at times to see her jump behind Sabrina for comfort and protection in what she deemed a stressful situation.

For many months after Sabrina’s passing, Morgan would not stay up in her summer pasture alone. I would walk her up the one-third-mile wooded trail each day to access the grassy fields, but for that first spring/summer and autumn, she would immediately follow me back down to the barn and just hang around the paddock with our two goats, eating hay all day.

We lost one of our goats that October and are down to just Rosie, a 13-year-old Angora goat. She and Morgan are now very devoted to each other, having both lost their long-time stable mates. But this summer, after the anniversary of Sabrina’s passing, Morgan began to stay up on pasture for a couple of hours after I walked her up, which progressed to six hours and sometimes the entire day. She would often roll and then gallop around once we reached the fields and seemed happy.

Things were going well, and I looked forward to riding more this year; however, Morgan has suffered from various bouts with lameness – first an abscess, then sore feet, possible laminitis and most recently a sore tendon and indications pointing toward Lyme disease.

It was about two weeks ago when I noticed the mare’s left hind foot appeared very sore; her front feet had seemed sore from time to time, and I contacted our trimmer, Emily, to ask if she might have trimmed the soles too short. She said no, she had purposely left a little more sole on for that very reason – but suggested that with all the lameness issues we’ve had this spring, she should be tested for Lyme disease.

I called our vet, Dr. Nebzydoski of Youngsville Veterinary Clinic, as that morning, Morgan was so lame in her left rear leg she couldn’t put her foot down flat, and her leg felt warm. She had spent more than six hours up in her summer pasture the day before, and I also told him that her front feet were sore and I haven’t been able to ride her as she had difficulty walking on the rocky trails (or on any rocks for that matter) on and off for several weeks, and I was concerned about laminitis.

He was able to do a farm call late in the day and first examined her feet with a hoof tester, a tool that looks like a long-handled pincer with flat or rounded tips, used to apply gentle pressure to places on the horse’s sole, toe or heel area to look for signs of lameness, laminitis or possible indications of what might be causing the problem. The problem wasn’t in her feet – the hoof tester did not indicate any lameness issues in either the left hind foot nor in either of her front feet, ruling out possible laminitis. He said that her feet were tender, which could be due to Cushing’s disease (common in Morgans and in horses that are overweight) or Lyme disease, which he has seen a lot of lately. He took blood samples for both tests.

When he examined her hind leg, it was swollen and very warm, and he determined that the lameness problem was not stemming from her foot but rather from her tendon. He said there were two tendons in that area that were swollen, the deep digital flexor tendon (DDFT) and the superficial digital flexor tendon (SDFT), and diagnosed tendonitis (swelling of the tendons) and possibly a bowed tendon. He said she must have somehow injured herself while she was up in her summer pasture and said commonly a horse will overextend their foot somehow, like on a rock, which pulls on the tendon and over-stretches it, causing it to become inflamed. It made sense that this is how it happened, as when Morgan is in her summer pasture she will usually gallop around, up and down the hills – and the footing is sometimes tricky. She very likely fell or took a misstep or had some sort of accident that caused her tendon to become sore and swollen. I had noticed a slight cut on the outside of her hock, for which I was given an antibiotic to add to her food.

Doc cautioned me that a bowed tendon “can ruin a horse” and said that the treatment he recommended involved giving her anti-inflammatory agents (Phenylbutazone), hosing it down with cold water or using ice, applying a liniment or DMSO (dimethyl sulfoxide gel) topically and putting her on stall rest (or at least keeping her quiet in the smaller paddock until the swelling goes down and there is no heat in the leg).

He demonstrated how you can see and feel the swelling if you compare one leg to the other, touching both legs at the same time for comparison, and repeated that her sore feet were not due to injury or laminitis, but could be due to Cushing’s (probably not in her case, as her coat is shiny and smooth and not long as is typical of Cushing’s horses), but was most probably due to Lyme disease. He said he could do a quick Lyme test in his office, or he could submit the sample to Cornell University Veterinary School, which takes a few days but will show if the horse tests negative or positive on three different antibodies, and whether it is acute or chronic Lyme. I opted for the more comprehensive test, as I was interested in finding out more information. Unfortunately, there is not yet a Lyme vaccine approved for horses, only for dogs. Treatment is to administer Doxycycline for a period of four weeks, and he said that the treatment is effective, and he has seen in his practice that generally horses get over the disease “just fine” after being treated.

Our next Horse Tales column will cover the outcome of treatment for Morgan’s swollen tendons and results of her blood tests.