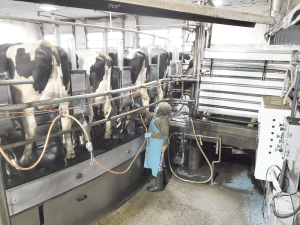 Kendra Lamb grew up on a dairy farm in eastern New York, helping with her family’s 70-cow herd in a tie stall barn. After several moves, completing a degree in animal science at Cornell and a stint with a pharmaceutical company, Kendra is working with dairy cattle again. This time, her work is on a larger scale and she’s in a different role.

Today, Kendra and her husband Matt are an integral part of Lamb Farms in Oakfield, NY. It’s where Matt was raised, and although Kendra joined the family with plenty of dairy experience, she says there was a significant learning curve in adjusting to farming on a larger scale.

The 2,400 cows, primarily Holsteins, on the home farm are milked in a 60-stall carousel parlor. An observation area adjacent to the parlor makes it ideal for farm tours. Matt’s brother Jonathan manages Lamb Farms’ second dairy facility about five miles away. This farm is home to about 1,300 cows, including show cattle and high genetic milking animals. “Jonathan is passionate about registered Holsteins, and he and his wife Alicia enjoy showing cattle,” said Kendra. “I grew up showing and learning about genetics, so I enjoy it too.”

Kendra said focusing on quality genetics has positively impacted the entire farm. “We’re putting in about 5,000 embryos a year,” she said. “The genetic base has increased dramatically through the use of ET and IVF. Overall performance, milk production, fat and protein, and health traits are improving exponentially because of the way we’re using genetics.” Elite animals serve as donors and a large pool of recipients are ready for embryos. Low-end cows, about 15% of the herd, are bred to Angus bulls. “We market a lot of fresh two-year olds,” said Kendra. “We have happy buyers who come back and purchase more.”

The family also owns a dairy farm north of Buffalo, which they purchased in 2009 when their Oakfield facilities were full. That farm is Lake Shore Dairy, where the family milks about 2,000 cows. “We have a couple of great farm managers who take care of the day to day operation there,” said Kendra. “Matt and Jonathan are there several times a week, checking on things and attending management meetings.”

Lake Shore calves are raised on that farm until about 10 months of age, then come to the heifer facility in Oakfield where they’re raised to pre-calving, then move back to Lake Shore Dairy. Milk from the three New York farms goes to Upstate Farms Cooperative.

In 2014, the family purchased a farm in western Ohio, known as Convoy Dairy, home to about 1,800 cows. Milk from Convoy is marketed to Dannon with a non-GMO contract. The Lambs have also added a non-family partner to the operation, the Jim Veazy family, to manage crops, environmental compliance and office work. Although management is consistent among the farms, Kendra said they’ll often see something that works well on one farm and can apply it to another.

Kendra’s main role on the farm is serving as calf manager. “I love data and spreadsheets,” she said. “There’s a lot of evidence behind changes we make. We’re always trying to grow – we use key metrics to monitor performance.”

Calf care begins with ensuring newborns receive colostrum that tests above 24% on the Brix refractometer. Calves are also tested for total protein within 24 to 48 hours of birth to ensure they’ve received adequate maternal antibodies. “That’s real-time data we can give to our maternity crew,” said Kendra. “Colostrum is so critical to healthy calves – it makes our job so much easier when the first couple of hours go well.” As calves grow, Kendra tracks treatment rates at different ages, along with average daily gains and weights when calves leave the calf facility.

The pasteurized waste milk fed to calves is fortified to 15% solids, but Kendra will drop that percentage slightly in summer. “Because we’re feeding twice a day, we have to get more energy into them,” she said. “We measure milk solids and figure out how much we need to add so milk is consistent at every feeding. Having a consistent product helps with general growth, and also reduces clostridial bloat and other issues from too much variation in the diet.” 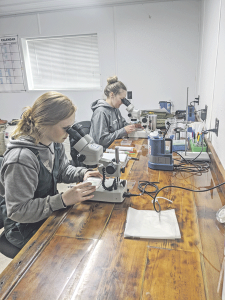 Kendra said the farm’s two-step weaning protocol has helped ease calves through the weaning process. “We’re always encouraged to push milk volume,” she said. “We get them drinking a higher volume of milk than what they were drinking in the past, then weaning is a crashing halt. We used to do one week of 1x milk at eight weeks, then water at nine weeks. What we’ve started doing is feeding 2 1/2 quarts twice a day at seven weeks, then 2 1/2 quarts once a day at eight weeks. At nine weeks they’re on water.”

Another measure that has helped transition calves to the heifer facility is keeping calves in the same pen or hutch until they reach 12 weeks. This requires larger pens, but Kendra has found that ammonia levels are lower, calves stay drier, and there’s less pneumonia.

Weaned calves are raised close to the home farm, and heifers are raised about five miles away. “We get the results of genomic testing back when calves are about four weeks old, so I can identify and keep an eye on them as they grow,” said Kendra. “They’re the future donors.”

In addition to high-quality heifers, many of which are future show calves, Lamb Farms also raises bull calves for stud contracts.

The incident solidified Kendra’s views about the importance of advocacy, and she invited the group to visit Lamb Farms to learn about modern dairy farming. That visit has become a tradition.

Kendra believes the time spent hosting farm tours is worthwhile, and continues community relations with farm tours, neighbor newsletters and the farm’s Facebook page. She is aware that some consumers are uncomfortable with the concept of large farms, but said Lamb Farms’ arrangement allows anyone in the family to return to the farm. “On my home farm,” she said, “all three of us couldn’t have come back without growth.”