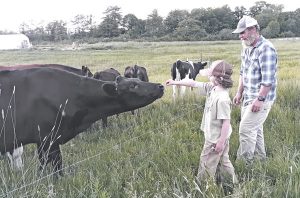 “We always have the biggest smiles on our faces when we walk around, like ‘I can’t believe we live here,’” said Gregg Stiner, co-owner of Grace Pond Farm, during a recent Farm Training Project workshop, a series of webinars put on by the Maine Organic Farmers and Gardeners Association.

Stiner and his wife and co-owner Rhiannon Hampson hosted the Zoom webinar, with their children Ruby, 15, and Maden, 9, who help on the farm, chiming in. They discussed the current state of modern dairy and ag policy in Maine and their own organic dairy and livestock operation in Thomaston.

They began the dairy in 2015 in Monmouth, working cooperatively with The Milk House, both shipping their milk to Horizon for yogurt in addition to producing their own milk and yogurt. Over the course of four seasons they had steady growth, but in 2018 their contract with Horizon ended and they were not renewed.

“They didn’t renew it because our yogurt was competition for them,” said Stiner. “They didn’t like that, so they stopped picking up quite a few farms in Maine at that time.”

Julie-Marie Bickford, Maine Dairy Industry Association executive director, who was in the webinar’s audience, lent more detail to the topic in the chat box.

“In 2018 eight Maine organic dairy farmers were told by Horizon Organic that they would not receive new contracts,” she wrote, adding that at the time all milk from Maine contracted by Horizon was shipped out of state for processing. (Maine still has no organic milk processing plants.) She noted that Organic Valley picked up a few of those farms.

“That was a blow to organic milk in Maine as a whole,” Stiner said. “But we and The Milk House were able to continue on and make things happen and that’s when we branched out and started to deliver to other creameries.”

Finding small local value-added producers allowed them to keep their herd numbers intact. Although it was a lot of investment in shipping equipment, Stiner noted they felt fortunate since many other small dairies had to either quit their business or slash herd numbers. Grace Pond is now only one of two licensed small milk haulers in the state and the only organic.

The shift in marketing required an increased land base to grow their herd and make shipping work, which ultimately led them to their current farm site in Thomaston, an 85-acre property that has been farmed since the 1600s, with a long history of dairy.

The old farmstead, however, did not come with any infrastructure, so they continued to keep and milk their herd at their old location while they built their dairy barn. The barn, which will milk up to 25 cows at a time in a pit parlor with an adjacent bedded pack barn, will be completed Nov. 1, allowing them to bottle their milk and sell it onsite, on busy Route 1.

They credit the farm’s diversification with allowing them to sustain their business, especially during the transition. They raise organically certified broiler chickens, turkeys, pigs and beef. Dairy currently makes up a third of their income, which they hope to increase to half when the barn is finished, which was delayed due to COVID-19.

They produce 400 gallons of milk weekly that Stiner delivers twice a week to the value-added producers they partner with – Swallowtail Creamery, Fuzzy Udder Creamery and Lulu’s Ice Cream and Gelato.

“It opens up this really creative space in food,” said Hampson. “Even though we’re part of this more traditional farm we can still be a part of that creative foodie space now as a dairy and livestock farm… I think it’s really exciting to partner with these small producers.”

Grace Pond’s most limiting factor is lack of processing infrastructure, for both dairy and slaughter, an issue many Maine farmers face. In the near future they plan to add on-site poultry processing that they will own and operate to address some of this, along with a brooder barn with pullet production. Their long-term goals include hosting a value-added producer to work on-site, and offering vocational programming for marginalized populations such as adults with developmental disabilities.

Hampson also works as a district representative for Maine’s 1st Congressional District in Rep. Chellie Pingree’s office, so she also shared current issues around food policy and ways farmers can advocate for themselves.

The Agriculture Resilience Act (ARA) will address many of the ag issues Pingree’s office spends time on. Hampson was able to talk with numerous farmers and other stakeholders across Maine to include their perspectives. The 174-page bill was introduced by Pingree to the House on Feb. 12 and inspired some successful appropriation of funding requests.

“The ARA is the space where we tried to tie [it] all together,” said Hampson. “What we think is going to be super important here in Maine and can also be replicated throughout the rest of the United States.”

The Processing Revival and Intrastate Meat Exemption (PRIME) Act would allow states to set their own regulations for custom-exempt facilities to sell to retail locations within their own state. The bill, which was co-written and last introduced by Rep. Thomas Massie of Kentucky, received support from both the far right and far left, but hasn’t yet seen a lot of traction from the middle, said Hampson, though they continue to pursue it because of the benefits it would afford small farmers, local restaurants and retailers.

A newer bill, Strengthening Local Processors Act, would give financial and technical support to small and very small processors to scale up facilities to meet federal guidelines. Pingree introduced it on Sept. 29.

What can farmers do to help affect pro-ag policy changes?

“You can vote,” said Hampson. “I know we are getting a little jaded sometimes these days but if you don’t participate then nothing changes.”

She listed other ways to get involved, including calling your delegation members, joining municipal councils and supporting trade associations. “And show up – educate customers,” she added. “Explain to them what you’re doing.”

“Maine’s ag community is like a family,” added Bickford. “We are always glad to help each other and build up our ag economy with an eye to the future. We may not be a big ag state, but we have the ability to feed those 80 million people in our vicinity. We will do this by being creative and having each other’s back and making sure that we lift everyone up.”