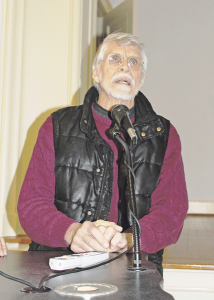 GENEVA, NY — You know what your crops should look like as they come up but if you can’t identify what weeds come up, it can be very difficult to trounce these competitors for nutrients, especially as an organic operator. New York Certified Organic’s final Winter Meeting for 2019 discussed weed identification.

He introduced Charles Mohler with the Department of Crop and Soil Sciences at Cornell University, as the main presenter. He said proper weed identification is vital to successfully diminish their impact.

“You wouldn’t say, ‘I have insects in my corn’ but people ask, ‘What do I do about weeds in my corn?’” Mohler said. “Weeds have different biology. You need to identify them so you can address them.”

He said farmers should reach out to their Extension offices to help identify the weeds they’re battling so they can understand what inputs contribute to their prolific growth.

He added that many producers “fertilize themselves into a weed problem.”

“The issue is we use a lot of compost and manure as fertilizer source,” Mohler said. “You may not know the nutrient source. The tendency is to err on the side of having enough.”

The nutrients are released slowly over time and the concentration of nutrients varies in the manure and compost used. Mohler said farmers usually supply enough nitrogen and usually apply excess phosphorus and potassium.

“Weeds have an interesting relationship with nutrients,” Mohler said. “Weeds almost always have as much or two to three times the uptake of nitrogen, phosphorus, potassium, calcium and manganese. They’re very fast gaining, starting from small seeds and getting very large fast.”

Mohler drew on a few research experiments about the responses of crops and weeds to organic compost and manure. He looked at a compost rate study, nutrient accumulation study, organic grain cropping systems, and experiments to identify critical nutrient element.

The crop rotation was corn, soybeans, spelt/clover, and back to corn.

“The perennials tended to be patchy on average, responding differently to nutrient inputs over the years,” Mohler said.

He found that phosphorus tended to limit weeds, but he’s not sure that it directly caused the strong response.

“It could be a soil health issue, but we were plowing down clover and using highly concentrated compost,” Mohler said. “We know phosphorus builds up.”

He added that avoiding compost and manure is advisable if farmers use cover crops and plow them down before planting.

“Some of the worst weed problems are on organic farms,” he added. “It takes a long time to draw down high levels of phosphorus.”

“If you starve corn five years, you won’t have good corn, but good weeds,” Mohler said.

In a different research project he studied, researchers found that corn received the highest rate of compost with good amounts of nitrogen, phosphorus and potassium. The corn didn’t respond well to compost, NPK or other treatments, unlike the lambsquarter and giant foxtail.

“We need very little compost and manure application for corn,” Mohler said. “We do need nitrogen for grain.”

“All major annual weeds of the Northeast increase growth even at very high compost rates,” Mohler said. “Manure may have a similar effect. Seed production increases exponentially with weed height and proportionately with biomass. Major perennial weeds may be responding similarly. It’s probably not a soil health effect.”

He advises a clover cover crop or even a crumbly sod plowed in, as corn showed little or no response to compost.

Mohler answered a few questions about specific weeds. One attendee asked about ragweed in small grains, for example, emerges early in spring, before crops become competitive.

“If you’re seeing a problem in one crop, look at crop rotation,” Mohler advised. “It didn’t develop in one crop but it only is competitive in one. It has a fairly competitive seed bank.”

He added that most weeds farmers experience were from the previous year.

Another attendee asked whether he should continue to let a field grow fallow or should he plant forage, winter grain or grain.

“So, you’re letting weeds grow?” Mohler quipped. “You want to interrupt the lifecycle of ragweed the summer before you plant winter grain. Delay tillage as long as you can before spring planting. You want very uniform stand with high density.”

“You could try cross planting for a more uniform stand or cross plant on a bias of 15 degrees,” Mohler said. “That would help with ragweed.”

Another attendee asked about a wild radish.

“Cover crop seed is a good way to introduce weeds to a field,” Mohler said. “It’s likely to come in with a rye cover crop. It has a fairly persistent seed bank.”

He advised a spring fallow period and planting beans a little late to flush the wild radish out.

“Decrease the seed bank before planting soybeans,” he said. “The seeds will be on the plant at the time you combine. If you set it low, go slow as you will capture a lot of the stuff. Weed seeds are in chaff. You could capture most of the weed seeds.”

He added that it’s harder to get out with a tine weeder.