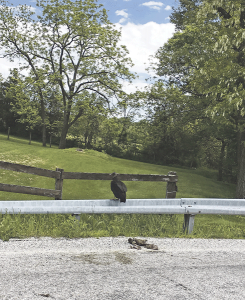 Cartoons and fairy tales often use the stereotypical black vulture as the symbol of death and doom. Unfortunately, many farmers are finding the black vultures of cartoons are becoming a real life problem.

Nearly everyone is familiar with turkey vultures – the large black birds with red heads, often seen circling overhead in groups, perched on guardrails or dining on road kill. But recently, black vultures have expanded in range and become a concern for both farmers and homeowners.

Although the black vultures’ range is from South America through the Northeast, they’re shifting northward. “Fifteen years ago, I wouldn’t have seen a black vulture in Pennsylvania without looking hard,” said Tony Roland, District Supervisor for USDA Wildlife Services. “Now I see them regularly in my travels.” Roland said in Pennsylvania, the black vulture population has increased at an annual rate of 11 percent between 2005 and 2015.

“Given that they only lay two eggs a year, that’s amazing,” said Roland. “They have high survivability and high fertility. In Pennsylvania, the black vulture population is estimated at over 13,000 birds. In the Atlantic and Mississippi flyways, where most black vultures are found, the estimate is more than four million birds.”

In addition to pursuing livestock, black vultures have a tendency to cause damage to buildings and property when bored; tearing at roofing, flashing and window caulking. They damage soft materials on automobiles by tearing away at windshield wipers and rubber gaskets. Roland has heard of black vultures tearing up pool covers and grill covers, and said they seem particularly attracted to Nerf toys. In addition, vultures’ highly acidic droppings and stomach contents have a vile stench and cause damage wherever the birds roost – from transmission towers to porch rails.

An important fact to understand about both the turkey vulture and the black vulture is that both are federally protected, in all states, by the Migratory Bird Treaty Act. “No one is permitted to lethally remove those birds without acquiring a permit from the U.S. Fish and Wildlife Service,” said Roland.

It’s possible to deter black vultures, but Roland said it’s critical to be proactive when the birds are first observed because populations increase rapidly. “Farmers should begin non-lethal harassment of black vultures as soon as they are observed on the farm,” he said. “If there’s a roost of 8 or 10 birds, next year it might be 15 or 20. When other birds see them feeding, they’ll join them.”

Roland describes some of the non-lethal methods to deter vultures, starting with proper and complete disposal of dead livestock. “If a cow dies, don’t leave it outside the barn and don’t put it in the back 40 where it’s going to attract vultures,” said Roland. “Cover trash cans and dumpsters, especially if there are food items in them. Black vultures will land on dumpsters and pull out food items.”

Since black vultures often roost in trees, cutting down or thinning tree branches can make an area less desirable for roosting. Without protection from the elements, fewer vultures will find suitable roosting space and may move on.

Management style, such as grazing operations where animals are born on pasture in spring and early summer, can influence black vulture populations. “Animal husbandry practices can help reduce losses,” said Roland. “Bringing animals closer to where activity is occurring regularly so they can be monitored, or bringing them inside for birthing can help reduce losses to black vultures.”

If vultures persist, additional non-lethal measures include anything that makes noise, from live rounds (not aimed at the birds) to shotgun-fired pyrotechnics, also known as bird bombs or shell crackers, designed to chase birds away. Roland said that depending on federal or state regulations and level of gunpowder, an ATF permit may be required for certain pyrotechnics. Dogs, especially livestock guardian breeds such as Great Pyrenees, Maremma and Anatolian, are often useful in deterring vultures.

Farmers should be aware that there are costs associated with black vulture management if the issue reaches the point where an on-farm visit by USDA Wildlife Services is necessary. However, being aware of the black vulture’s habits, careful observation and quick action may be enough to avoid lengthy management actions.

Roland explained the role of USDA Wildlife Services in vulture management. “What we recommend for folks having problems with either vulture species is to contact us for phone advice on solving the problem,” he said. “If they’ve tried everything possible with non-lethal harassment and husbandry practices to bring birthing livestock closer to the barn or inside, then we can assist landowners with acquiring a Migratory Bird Depredation Permit. We need information such as where damage is occurring and what has been done to address the problem such as harassment with pyrotechnics or bright lights aimed at the roost trees.”

A one-year permit allows the permit holder to take up to 10 percent of birds observed to be causing problems to livestock or property. For example, if 100 birds are on the property, the permit allows taking up to 10 birds per year; usually one bird/day. “The legal taking is to reinforce harassment,” said Roland. “They can become accustomed to fireworks. But if you switch it up and use non-toxic live rounds and a shotgun and shoot one in a group, they’ll figure out there’s more going on and go somewhere else.”

Whether it’s a kettle (a group of vultures in flight), a committee (a group of vultures resting on the ground or in trees), or a wake (a group of vultures feeding) – don’t hesitate to initiate deterrence. “The first black vulture you observe on the farm is the time to start using non-lethal methods,” said Roland. “The problem didn’t occur overnight, and it isn’t going away overnight. The sooner you start managing or let us know about it, the more effective we can be.”

For more information on managing problem wildlife, including vultures, residents in any state can contact USDA Wildlife Services at 866.4USDA.WS.