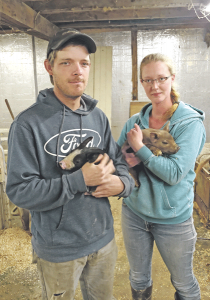 Farming has been a generational vocation for the Flinchbaugh family in York, PA. Dustin Flinchbaugh said his grandfather purchased a farm to raise chickens, and in addition to using an existing a barn for housing them, he constructed two more buildings.

When Dustin and his wife Jessica moved to the farm, Dustin’s plan was to maintain a breeding herd of Angus and Angus crosses. When the cattle proved to be less than profitable, the young couple were forced to rethink their plan.

“They were eating me out of house and home,” said Dustin. “I was putting out hay that we would typically sell and only getting part of that back on the calves.” It didn’t make financial sense to continue, so their new plan is to raise calves to about 800 pounds and sell them between August and October. This allows him to sell hay throughout winter when customers most need it. The Flinchbaughs are currently making about 120 acres of mixed grass hay in small square bales, and Dustin said it’s easy to sell.

Jessica was on board with raising beef cattle, but she wanted a pig – just one pig. “We had friends and family who wanted a couple of pigs each year,” she said, explaining the start of Pig Hollow Farms. “Berkshires have about eight to 12 piglets a year, so we were going to finish and sell them. I convinced Dustin to let me buy one gilt for breeding but it escalated quickly.” Jessica said her first Berkshire gilt sold her on the breed.

For the first several years, the Flinchbaughs also purchased piglets from a local farm and finished them for customers. Selling finished pigs became their business, but that plan changed when customers started purchasing pigs to finish themselves, or in some cases, start their own pasture-based pig operations. When Dustin and Jessica found there was a demand for pasture-raised pigs, they switched their plan from finishing to breeding.

Today, Jessica and Dustin have 25 sows and gilts and three Berkshire boars. The sows are Berkshires, Durocs and crosses of those two breeds. “Last year we bought two Large Black-Duroc crosses,” said Jessica.

Since Jessica’s father had experience raising pigs, Jessica and Dustin relied on his input as they learned about pigs. “My father’s knowledge from having raised pigs, along with help from experienced pig farmers in the area, have helped answer questions,” she said. “We also have an amazing vet who will answer our phone calls and questions.”

Although some small-scale pig farms allow sows to farrow outdoors, the Flinchbaughs said that setup often means higher mortality and fewer weaned pigs. “If we want to keep going, we can’t afford to do that,” said Jessica, adding that sows go willingly to the farrowing house and seem to enjoy having all they can eat in a cool environment.

To accommodate their growing breeding operation, the Flinchbaughs converted the basement of one of the existing buildings into a farrowing house. “We have nine farrowing pens and two weaning pens in there,” said Jessica.

When sows aren’t raising piglets, they’re on pasture surrounded by electric fence. To teach the pigs to respect electric fence, Dustin built a training pen using woven wire with two-by-six-foot boards on the top and bottom. One strand of electric wire on the inside of the pen teaches the pigs to turn around and back off when they get close to the wire.

“When pigs get hurt, their first instinct is to run through whatever hurt them,” said Dustin. “The electric strand is about two inches inside the fence and about four inches from the ground. They’re likely to touch the hot wire with their sensitive snout first.”

Jessica said it only takes a few days for most pigs to learn to respect the electric fence, and about three weeks after training begins, pigs will stay within the boundaries of three-strand fenced pasture.

At first, the Flinchbaughs bred pigs via AI, but found it made more sense to purchase good boars. “There are several good pig breeders in the area, so it’s easy to locate good boars,” said Jessica. “We breed the sows inside, and once they’re bred, they go back outside on pasture.”

While last year’s project was the farrowing area, this year the Flinchbaughs are working on establishing additional pasture. “Dustin would also like to put up a finishing house for the pigs we finish on the farm,” said Jessica. “The feeder pigs are currently housed in the breeding barn and they take up extra pens.”

Now that the couple’s business model has switched from breeding one sow twice a year and selling pork, they have a steady stream of customers for piglets that are sold shortly after weaning, usually at about seven to eight weeks old. “People feed them out to butcher,” said Jessica. Many customers return every year for piglets to raise. “We keep about 10 piglets every few months to finish here.”

To maintain biosecurity and the genetics they’ve developed, the Flinchbaughs choose gilts from their own sows to raise as replacements. Rather than bringing in new females from outside, they rely on new boars to switch up genetics. “We don’t like bringing in any pigs from the outside,” said Jessica. “If we do, we quarantine them for 30 days followed by a vet check.”

The Flinchbaughs have now been raising pigs for custom butchering for seven years, and have been breeding their own pigs for five years. While they can sell whole hogs and have them custom processed for customers, they’d also like to offer retail cuts. However, with the closest USDA processing facility located in Lancaster County, Jessica said they’re considering using a USDA processor in Adams County who can process pigs for retail sales.

While Jessica and her dad have discussed other breeds, she said the conversation always comes back to Berkshires. “It’s their temperament,” said Jessica, “and the meat is amazing.”