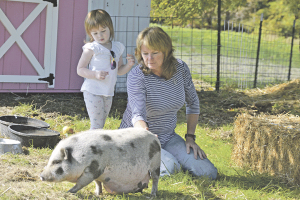 OXFORD, NJ — The animals from Just One More Farm have made appearances on television shows such as “Saturday Night Live” and “It’s Always Sunny in Philadelphia.”

Those may not be standard roles for farm animals in rural New Jersey, but Bonnie Terry’s farm isn’t typical in many ways.

That starts with the name. It refers to Terry’s feeling that there is always room for “just one more” animal on a farm.

Terry grew up on a farm in Long Valley, but explained her father has traded in his horses for cars. She moved to a couple rented properties before buying her current 25-acre spread off Jonestown Road in Oxford. The farm includes portions of the old Oxford Zinc Mine and its railroad bed.

Those are in wooded areas of the farm that Terry intends to keep in their natural state. She believes in clearing only the land she needs.

Besides helping the animals with their acting roles, Terry provides carriage rides.

She is well known in Northwest New Jersey for her Belgian mules, Caramel and Apple, who take customers into the pumpkin fields at Melick’s Town Farm in Califon. She also has Percheron teams and just acquired a black pair, Cider and Donut. They join gray Percherons, Mike and Ike. She always wanted a white carriage horse but is finding the lighter colored horses hard to find.

Pumpkin patch rides are only part of Terry’s operation. As the holidays approach she has booked a number of town festivals.

During hot weather, the Percherons work early in the day and the mules when it’s warmer since the weather doesn’t bother them. She particularly likes working with mules because the stubbornness they are known for is really a sign of intelligence. They refuse to go anywhere too dangerous for them and don’t colic because they eat what they need throughout the day.

Often she uses two teams a day because people unfamiliar with horses think they are working too hard if they work all day. The truth is, she notes, horses like to work and if they are well cared for they don’t have a problem working all day.

Because her business has increased 50% over last year, she needs the three teams.

Terry didn’t start out looking to run carriage rides. She showed American Quarter Horses and was an American Junior Associate Champion. As a young girl she showed in 4-H then attended Centenary College and rode on their team. She was later a riding coach at Drew University.

Her husband, Paul, wasn’t as fond of horses as she was, but he told her about a horse for sale in Amish country. She ended up buying both Mike and Ike and calls the team “The Mike and Ike Express.”

“When the Amish have horses that lose their snap, they are perfect for me,” Terry said. She turned her purchasing from the Amish into a friendship.

Paul is the “wagonmaster” and gets the horses to events, she said.

She gives riding lessons and some of her students help at the carriage rides, taking money, greeting customers and doing odd jobs around all the animals she brings to events. While working the students are required to keep their phones off and answer questions about the animals.

Besides her equines, Terry has other animals she takes to festivals and other appearances.

Among the critters are tiny Call ducks, small pot-belly pigs, a Jersey heifer and chickens. She also has Frank the llama and several goats, mostly French Alpines, but some Fainting Goats.

Her most exotic animal is a Zebu, a small breed of African cow, called Terminator.

Frank has posed with the Sugarland Band, Jennifer Nettles, Patricia Heaton and the cast of Duck Dynasty in ads for World Vision. Donkeys Betty and Ethel have been to Bryant Park and participated in live Nativities in New York City churches.

Several of the animals appeared at Trump rallies.

She often has her animals at World Vision rallies. World Vision International is an evangelical Christian non-denominational humanitarian aid, development and advocacy organization, according to its website. Frank enjoys walking around Times Square for World Vision, she said.

She said World Vision loves alpacas and Terry has a couple, but she prefers to work with llamas, she said, because they have a better disposition.

She is getting frustrated with attending some of the festivals because some of the farm animal rescue groups are aggressively offensive to people who work with animals, regardless of how well cared for they are.

“They try to make people who work with animals the bad guys,” she said, even though animals kept working have a longer life expectancy than those who live their lives turned out to pasture. She said there are now police on every job she goes to.

She has an agent who books the jobs for her animals.

Although the animals are her babies now, Terry has two children, Matthew, who is in the Army, and Meghan, who is a photographer.