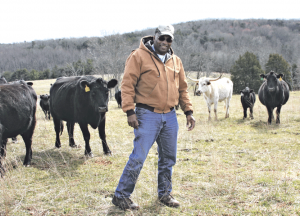 Diversification is the key to success for the Wright Family Cattle Farm, located on 800 picturesque hilltop acres in Bedford County, VA.

Calving season is on the horizon, with blossoming trees and greening pastures signaling the approach of spring.

The farm, founded in the 1920s by brothers Randolph and Rudolph Wright, now in the able hands of third- and fourth-generation family members, crowns the spine of a ridge near Smith Mountain Lake, one of the Southeast’s major tourist meccas. Proximity to the lake, with its expensive shorefront weekend getaway homes, has driven up rural property prices, making it difficult to grow the farm today, the site of a 400-Black Angus registered and commercial beef cattle herd, said Curtis Wright, 58, a grandson of a founding brother and sibling to farm manager Danny Wright, 51.

“There is a lot of growth in the area,” Curtis said. “On a quiet day, we can hear boats on the lake” at least 10 miles distance from the farm. “It has become hard to grow more land. Prices are unreal. You have to get better at using what you have through better genetics and better products.”

So, rather than expanding their acreage, the Wrights are branching out into related endeavors complementary to breeding and selling top-notch animals on the beef market and as breeding stock.

Two of Danny’s three grown children, Kaelyn and Jason, have opted for careers in ag-related professions. Kaelyn runs the family fencing company and is a professionally trained and licensed practitioner of beef cattle AI. Jason, who recently graduated from diesel mechanics college, is helping his dad and uncle construct an auction barn on the farm, where the family plans to offer cattle for sale to the public. He is also a welder who uses his skills to repair farm equipment, according to his father.

Their father, Rudolph, used to sell beef by the half and quarter to individual customers. They still sell smaller lots, in packages, to individuals through their website as well as at local farmers markets in spring and summer, and a few local grocery stores. When they first started selling beef by the package, the Wrights carried a grill with them to entice buyers with samples of the cooked product. Black Angus beef, noted for its flavor, marbling and tenderness, was a hit. During the holidays, they also prepare and sell beef gift baskets.

“We have everything from tenderloin to ground beef,” said Curtis. “People love beef in this country.”

Both brothers live on the farm with their families.

Even successful self-employment can be challenging, Curtis admitted. “It’s like being a hunter,” he said. “You’re always out looking for something to eat. We have long days and long nights. We work in the cold rain and sweltering heat. But we all love it. Spring, and the babies, are coming… It’s a sight to see.”

Also among the challenges facing beef farmers today are finding – and keeping – good labor, and keeping an eye on fluctuations in commodity prices. They used to rely on migrant labor, but they feel there is too much red tape involved now to make it worthwhile or cost-effective.

“You never know what’s going on in Washington,” Curtis said. “It’s very inconsistent. You really have to keep your eyes on it.”

Curtis’s wife works off the farm, her job providing health insurance for the family. She also keeps meticulous records, tracking everything from production costs to profit and breeding data.

The family started out with several cattle breeds, finally opting for Angus, noted for its gentle demeanor, tender beef and fast growth rate compared to other breeds.

“We tracked several different breeds,” noted Danny. “We weighed the calves every other week, and the Angus put weight on faster than others.”

They’ve used AI to improve herd genetics and performance for more than 30 years, he said. Only high growth animals are kept in the herd. Danny pointed out that much of their top performance genetic material comes from North Dakota Angus bulls.

“It costs just as much to feed a sorry one as a good one,” he explained. “We also keep the daughters of high performing cows. We’ve built on cows that Dad had, built on the same line we’ve had for generations.”

Good-looking stock, they’ve also learned over the years, also pays dividends in the long run. “In the beef you sell, you’ve got to have good eye appeal to customers too,” Danny noted.

As they appreciate the loyalty of beef buyers, the Wrights acknowledge appreciation of those who help them bring their product to market, among them Smith Valley Meat Processing, butchers they’ve dealt with for many years.

“You want your meat to have the same appeal in the case,” said Danny. “It’s a two-hour drive to their facility, but it’s worth it. We’re all hands on deck, trying to educate the public about good beef.”