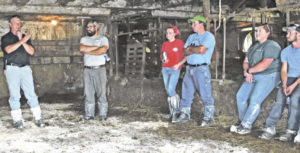 Porter worked for several months this year with specialists at both Maine and Vermont Cooperative Extension to address this by arranging to bring Dr. Larry Tranel of Iowa State University Extension and Outreach to northern New England to present his workshop, “Economics of Robotic Milking and TRANS Iowa Low-Cost Parlor Improvements and Renovations.”

Tranel is nationally known for his work in converting tie-stall barns to swing parlors as well as how best to weigh and examine the feasibility of installing robotic milking. He has previously come East to talk about his hands-on research, which includes developing an annual comprehensive budget analysis approach in recent years with his Iowa State colleague Kristen Schulte.

The final of four workshops took place Aug. 26 on the Patch family’s eighth-generation Walhowdon Farm, where between 65 and 70 Holsteins are milked in NH’s Upper Valley. Two days earlier, Tranel had spoken in nearby venues in Maine – Bo-Lait Farm in Washington and Sweetland Farm in Albion. On Aug. 25 he spoke at the Geordie and Emery Lynd Farm in Cabot, VT.

Tranel emphasized overarching concepts in his workshop, plus numerous practical details. He made it clear that he strongly believes that over the long haul it is not viable to stick with inefficient and time-consuming past practices.

Labor efficiency in many of today’s milking parlors is low, whether measured on a per cow or a per hundredweight basis, he explained. “The average person in this country milks 32 to 35 cows per hour,” he said. “The goal is to milk 70 to 75 cows per hour.”

Tranel recommends that dairy farmers either go to one extreme or the other on the milking system spectrum: Build an ergonomic, labor-efficient TRANS Iowa low-cost parlor or install a costly labor-saving robotic system. He does not recommend spending money on something that’s some kind of fancy “in-between.”

He also urges dairy farm owners to spend enough time determining exactly how much investment and risk is reasonable at their particular farm, given their specific circumstances. Every farm and every situation is different. Nonetheless, he pointed out, a shorter and less-physically taxing milking system can make it more likely that any younger family members will stay on or return to the farm.

“With proper design, an existing facility may be able to be transformed into a labor-efficient, low-cost and ergonomically sound option,” Tranel said. His schematic designs, drawn by Prof. David Kammel of University of Wisconsin Extension, were copyrighted in 2007. The cost advantage of swing-line equipment is obvious: each swing-arm unit is used to milk two cows, with the producer only having to walk the short distance across the operator’s pit. The pit’s recommended width is six feet, but it can range anywhere from four to seven feet.

The precise size of all the milking parlor’s features should be tailored to the typical cow size in that farm’s herd as well as to worker height. “The goal is for producers to milk cows without bending their knees, necks or backs, reducing physical strain and long-term wear-and-tear, plus properly positioning – according to cow size – a kick rail for worker safety,” Tranel said.

The Iowa State expert toured the Walhowdon Farm in advance of the workshop, checking out all of its barns and outbuildings. Surprisingly, he found that a ground-floor space at the rear of and beneath the main floor of the farm’s multi-tie-stall dairy barn would be the most advantageous spot in which to install a low-cost swing-line milking parlor. Other potential spaces are already being used to successfully raise heifers that must have positive ventilation during their first 45 days of life to avoid illness or have been co-opted by the farm’s growing wholesale maple syrup business.

Workshop participants moved to the ground-level area to allow everyone a clear view of the steel I-beams overhead and the wood king beams that run the length of the building.

Tranel referred to cows as being “Ice Age” mammals, making them creatures that do not thrive at over 73º. He also noted that cows prefer to eat food that is no more than six inches off the ground. “They don’t like to eat up; they’re grazers,” Tranel said.

He urged those on hand to understand some of the subtleties: the slight built-in floor slopes that encourage cows to enter or leave the parlor or to spread their back legs, making an operator’s work easier. “Cows like going uphill,” he said. In addition, cows should make their own way into a new parlor. “Don’t train them to need someone to go and get them out of their waiting area – time is money,” the expert noted. “For a rapid exit, depend on a ‘leader-follower’ system.” He added, “A parlor should be bright and well-lighted; cows have no depth perception, so get rid of shadows.”

Despite all his own experience in designing and building low-cost parlors, Tranel was quite clear that all farmers should seek a consultant’s advice. “You are the worst consultant on your own farm,” he said, admitting that this was as true for him as for anyone else.

When robots were discussed, both Tranel and workshop participants noted that a farm’s closeness to professional repair crews is an important consideration when considering possible downtime. Tranel highly recommended having one or more family members and/or employees develop the mechanical skills needed to handle typical breakdowns and to faithfully follow maintenance routines. “Be realistic when assessing the likelihood that you and your crew can do most of the repair and preventative maintenance work on robots,” he urged.

Tranel has a number of presentations available on Facebook, such as “Benefits of Low-Cost TRANS Iowa Milking Parlor: Producer Perspective,” plus a four-minute time-lapse construction video on “Building a TRANS Iowa Low-Cost Parlor.”