Innovation with cow comfort in mind 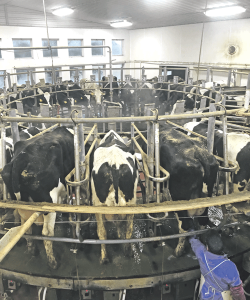 Dairy farmers take every measure possible to provide the best care for their animals while remaining profitable. As one dairy family in Pennsylvania continually seeks the best ways to care for animals, they’re taking sustainability and stewardship to a new level.

Reinford Farms, in Mifflintown, PA, was purchased by Steve Reinford in 1991. He started milking 57 cows in a double-four parallel parlor. When his three sons decided to stay on the farm, the family started adding housing to accommodate their growing Holstein herd.

By 1997, the herd had grown to 120 cows, maxing out the facilities. The family constructed another barn in 1998 to accommodate 150 more cows. As cow numbers continued to grow, existing barns were converted to freestall barns. Today, after adding cows and refurbishing buildings, the Reinfords are milking about 700 cows, three times a day, in a 28-stall carousel parlor – the first of its kind in the east.

Throughout the growth of the farm operation, the Reinfords remained determined to maintain their goal of efficiency, environmental responsibility and fostering good relationships with neighbors. After learning about methane digesters at a Pennsylvania Dairy Summit, they looked into the concept as a way to manage manure more efficiently while providing energy for the farm.

Son Brett said the initial goal of installing a digester was for odor reduction. However, he soon realized that digesters have other benefits, including revenue from selling electricity, handling waste produce from local grocers – and creating a great public relations story for the dairy industry.

The concept of a methane digester is fairly simple: organic material (manure and food waste) is added to the digester, where it undergoes anerobic digestion with the help of bacteria. The digestion process results in biogas, comprised primarily of methane, which rises to the top of the digester and collects in an inflatable rubber bladder. Methane is then diverted to an engine that runs an electrical generator.

The original digester, designed for 1,000 cows, was up and running in 2008. Manure is scraped in the freestall barns three times a day and moved to the digester through gravity flow pipes. Produce waste from local grocery stores keeps the digester running at capacity. Excess heat operates a grain dryer and heats farm buildings and a home. Separated solids are used for bedding, and the liquid portion is applied to fields.

More recently, Brett learned that food distribution centers had product to dispose of, but much of it was packaged. Although he was interested in recycling this product, handling large quantities of packaged food would require a depackaging unit along with a building to house the unit and equipment to handle the waste.

The new depackaging unit, housed in its own building, separates recyclable material including #2 plastic, aluminum, tin and cardboard. “Last year we recycled 200,000 pounds of tin,” said Brett. “The material is bundled and sold.”

With manure from more cows and a significant amount of food waste coming from the depackaging unit, it made sense to install an additional, larger digester. Brett was already familiar with the workings of a digester, so constructing a larger one along with a plant to convert methane gas to electricity wasn’t a daunting project.

The new digester is currently operating at one-fifth capacity and will soon be fully operational when it’s connected to the grid. Brett said that while the first digester produced power for 100 homes, the new digester can power 500 homes.

In their ongoing commitment to provide top-notch care for every animal on the farm, the Reinfords recently constructed a new calf barn that houses 150 calves. Newborn calves receive colostrum and spend three days in a hutch to ensure they’re well-adapted to drinking from a nipple before moving to the spacious new barn. “We have very strict protocols for how much colostrum newborns get,” said Brett. “We have extra colostrum, and it’s all tested.”

Calves are placed in groups of about 15 according to age, and remain clean and dry on slatted plastic flooring. Manure drops through the flooring and moves to the digester, and pens are cleaned several times a day.

To ensure fresh air circulation, the barn is equipped with tube ventilation and curtains that drop automatically when weather conditions deteriorate. “The calves are comfortable and clean,” said Brett, adding that the goal is to maintain an interior temperature of around 60º. “Next year the digester will heat this building.”

The auto-feeding system in the barn dispenses pasteurized milk to calves, each of which has an RFID tag to track individual intake. “We pasteurize milk using heat from the digester,” said Brett. “We can fine-tune how much the calves drink and see how much each one drinks. Calves remain in the same groups as they mature, which helps reduce stress.” Free-choice starter feed and fresh water is available at all times.

Like any other technology, the RFID readers are a management tool and don’t replace observation. In this case, those who work with calves have more time to monitor calves, and any calves that need extra attention are immediately flagged for extra care. “The workers who care for calves like this a lot better,” said Brett. “Before, when all the calves were in hutches, crews had to work outside in all kinds of weather.”

Brett said the new calf raising system presented challenges as the crew learned to manage calves in a completely different way, but said it’s working better as they continue to make improvements. “We aren’t spending as much time feeding,” he said. “We still have to go through and see which calves aren’t drinking enough, but it’s mostly a matter of keeping it clean.”

While Brett manages the office and runs the food waste facility, his brother Chad manages the crops and houses young stock on his nearby farm. Brother Drew heads up overall farm management along with machinery maintenance and repair. In 2017, Reinford Farms was recognized as an Industry Award winner by the American Biogas Council, and the family is currently in the final steps of transitioning the farm to the brothers.