Innovation in the industry: Raising buffalo for milk, cheese and more 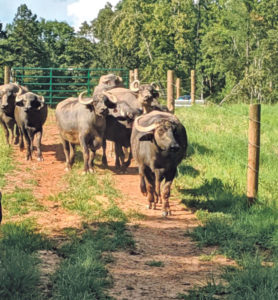 Deep in the heart of Salisbury, NC, lives a unique farm, one of only five in the nation, that creates meat and cheese products from water buffalo. David and Faythe DiLoreto grew up far from the farming industry as a teacher and a family physician. All of that changed, however, after a trip to Italy left their taste buds begging for more. “We fell in love with the mozzarella cheese in Italy, which is made with the milk from water buffalo,” David said, “but when we came home, we realized no one made it here, so we decided to do it ourselves thinking it can’t be that hard.”

Starting out with a bull and four buffalo, David and Faythe quickly learned that everything with buffalo is a steep learning curve and no easy feat. In fact, Houdini the buffalo got her name soon after arriving at the farm when the DiLoretos discovered she was quite the escape artist. “When we went to pick up our second group of buffalo, we didn’t realize the electricity went out while we were gone, including the fence,” David said, “Houdini decided to escape that night, while she was pregnant, and we had both mama and baby on the loose, possibly in a nearby subdivision. After following many cow-pies and the words of neighbors who had seen her, we were able to catch both and return them safely to the farm.”

Since that day, with the natural determination of farmers, they have grown Fading D Farms into a 20 buffalo operation producing meat, milk, cheese and more. “We took two courses in cheese making, one in the states and one in Italy,” Faythe said. “The mozzarella is definitely the hardest to learn and we have only recently perfected it within the last year.”

A day on the farm starts around 11 a.m. with Faythe in the processing facility making cheese and gelato, and David in the barns caring for, milking and breeding the animals. They also have a friend, Jose, that helps with feeding the calves, planting hay and farm maintenance. “The hardest part is getting it all done because sometimes we are working until 11 p.m. at night,” David said, “but we live and die by our own decisions, which at the end of the day is very rewarding.”

According to David, buffaloes are very relational animals. In fact, David often plays classical music for the buffalo in his milking parlor to ensure they are calm and ready to be milked. “Buffalo take a bit longer to let down and be milked than cows do because they have to be comfortable not only with the person doing the milking but also with their surroundings,” David said. “Once you develop a comfortable relationship with them, they are very friendly and personable animals.”

Products from Fading D Farm can be found at the farm store on Saturdays or at Your Mom’s Bazaar in Davidson. Many restaurants also use cheese and meat products from the farm. “Our cheese products have 15% more protein than products that come from cows’ milk,” David said, “and they often work well for people who can’t consume dairy because of the A2 protein that makes it easy to digest.”

David and Faythe love the cheese by itself when it is warm, gooey and fresh, but they also enjoy mixing it in with dishes such as pasta, pizza and caprese. “Farmers are invested and love what we do,” David and Faythe said. “When you purchase local products, like ours, you can rest assured that they are safe, humanely raised and made with lots of hard work and pride.” In the future, the DiLoretos will continue to provide quality products made from buffalo milk to their customers, keeping it a viable option in the U.S. They also will continue to educate the public on their farming process in the hopes of inspiring the future generation to farm water buffalo as well.