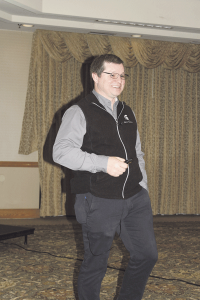 Pennington believes high yielding wheat starts with building a crop canopy that maximizes light energy capture. “The more light you can capture, the higher the yield potential,” Pennington said. By increasing the opportunity for photosynthesis, the plant can produce more.

He said a more upright angle to the plant enables it to capture more sunlight, which is measured by photosynthetic active radiation (PAR) – how much light gets through the canopy. A wheat plant with leaves that are less upright may grow more quickly early on, but that growth tapers off and is eventually exceeded by plants with more upright leaves – the ones that have greater opportunity for allowing photosynthesis since they’re not shading lower leaves.

“You want two layers of leaves per every unit of ground area,” Pennington said. “Think about row spacing, planting density and variety selection.”

Pennington explained that the first five tillers have their own root system and these rob the main plant of water and nutrients. That’s why it’s vital to strive for four to five tiller plants and to plant seeds in the row at 2.5 to 3 centimeters apart. Plant growth regulators can manage tillers too.

“Knocking back that apical dominance lets the other tillers” take better advantage of the sunlight and the opportunity for photosynthesis, he said.

Greater uniform head emergence could mean better head scab control since growers would apply controls when all the heads are emerging.

Based upon early results of a precision planting trial in which he’s involved, Pennington advises planting with a seeder going 3,100 RPM and with a tractor driving eight to 10 miles per hour.

“It’s still in the testing phase, but this might be a better system,” Pennington said.

Ideally, farmers would have one inch between each plant, but they don’t, Pennington said. “There was a lot of variability, so we’re not quite there with seed singulation.” 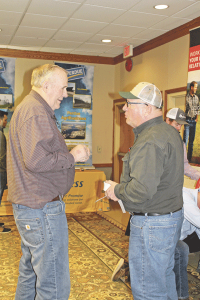 He found that the precision planter is yielding higher than the drill planter in almost every case.

In the trial, most of the herbicide was applied in autumn, a strategy which may also offer benefit. Once the wheat develops a good canopy, that tends to suppress weed growth.

The plants yielded more heads per square foot and heavier kernels per head, which both add up to a bigger yield.

“More plants and more tillers means greater yields,” Pennington said. “Harvest grain at the highest population because we had less kernels per head they could fill up those kernels.”

He’s also studying ways to push the limits of wheat yield, including higher nitrogen application, improved disease control and reduced lodging. “We haven’t had much of a lodging problem with wheat,” Pennington noted.

Gauging nitrogen application varies by year and weather. It’s something you have to manage every year, Pennington said.

“It does pay to do the additional management,” Pennington said, “but you should select the right variety. We’re seeing not a big response putting on nitrogen at planting in the fall.”

He counts as the top guiding principles for maximizing wheat yield the limits of climate and soil, including soil type, drainage, rainfall and day length; biotic and abiotic factors that reduce yields in this area, such as fungi, bacteria, soil nutrient status, compaction, crop rotation, weeds and insects; and identifying management practices to address those factors.