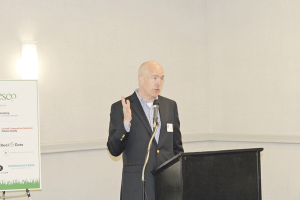 GENEVA, NY — At a time when the farm-to-table movement has never been more popular, discussing the trend’s role in agritourism represented an ideal first session at Al Fresco Flx, a presentation by a variety of representatives of the craft food and beverage industry and agritourism farms.

“Flx” is the local abbreviation for “Finger Lakes,” an area spanning a central swath of Upstate New York that’s largely pastoral, dotted with villages and just a few small cities. The Finger Lakes’ counties are largely rural and draw tourists to the area’s wineries and water-based recreation. The event emcee, Ethan Fogg, planned the event with the hopes that more farmers and value-added businesses can continue to grow the region’s offerings to both tourists and locals.

Fogg is the executive director of the Canandaigua Chamber of Commerce. He hopes to make Al Fresco Flx an annual event.

The first session, Demand in the World of Farm to Table and Agritourism, was a panel discussion led by Pilar McKay, Ph.D., with Cornell Cooperative Extension of Ontario County.

McKay sees the farm-to-table movement as an opportunity for farmers and food producers. Especially in the past two years, the trend has greatly expanded and is ideally suited to the state, regardless of what consumers want.

“Every type of diet is supported by New York State,” McKay said.

She acknowledged the complexity of a food system, which includes numerous interacting, interdependent facets, from food production to managing food waste, among producers, processors, distributors, preparers and consumers.

McKay said that “local” food hasn’t been clearly defined. She believes it’s important to understand why buying local is important.

The more people New York State items, the more items will be developed to meet the need.

McKay also said it’s important to remain aware of possible “local washing,” meaning businesses that present their goods as small-scale, locally produced when they’re really mass produced or comprised of ingredients sourced from outside the area.

She calls “food values” the issues surrounding food systems, such as how it’s grown, how it’s prepared, where its grown, and more. Food values closely relate to farm-to-table. Understanding these elements helps anyone in the food business better engage customers.

McKay asked the panelists about their customer base. Pyra said Rugenstein Family Farm sells mostly to family, neighbors and friends-of-friends through word-of-mouth advertising, which has fit the farm well for its size. But that may change as the farm’s close proximity to markets in Rochester, Syracuse, the Finger Lakes and New York City can help Rugenstein scale larger when the time is right.

“The Finger Lakes is a big tourist base,” Pyra said. “We have ample water, food sources and consumer base.”

The farm’s next big step is to sell more wholesale beef by working with restaurants. Already, Rugenstein is supplying a food truck with ground beef. Pyra feels it’s a good fit since the owner understands that the farm is a small supplier and that it takes 16 to 18 months to grow a cow to size for slaughter, plus three weeks to process. 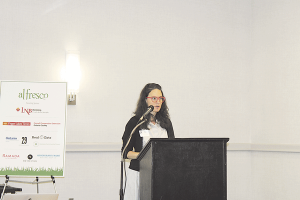 And there’s also many producers with produce they don’t sell because they cannot connect with the right buyers.

He said the Food Hub helps farmers partner with buyers that need the amount of food they’re capable of producing. That helps farms scale at the rate and size they prefer, as well as providing buyers with a consistent source of what they need. He also advises farmers on what to grow sometimes. For example, growing specialty items can help a small farm stand out.

Similar to a dairy co-op, the Food Hub frees farmers from the time-consuming task of finding buyers for their perishable goods.

Conroy continued that one way a food hub helps increase stability is assisting farmers in developing value-added products from their produce.

But by leveraging the appeal of local foods, farmers can distinguish themselves from goods made elsewhere. Conroy said the Finger Lakes represent a brand that local producers should capitalize on, for instance.

Pierre Heroux had travelled internationally for business for 20 years before joining his wife, Karen Heroux, in founding Simply Crepes. After his early retirement, he and Karen decided they could start a business based upon their family tradition of making crepes on Sundays.

Their travels to venues as far-flung as China, Japan and France inspired them to introduce many different kinds of crepes, not just dessert-inspired crepes. Fresh fruit, eggs, real maple syrup and more can fill crepes.

Heroux changes the menu seasonally to use local ingredients, such as butternut squash and apples in fall.

“Supporting the community and farmers is important,” Heroux said. “We support their businesses and they support ours.”

Though the restaurants aren’t 100% farm-to-table — Heroux isn’t sure they’ll ever be capable of doing so — he has made many steps in that direction. Initially, he sourced maple syrup from Canada; however, once he learned that “New York makes some pretty good maple syrup,” he said, he began buying from Stoney Ridge Farm in Farmington, NY, not far from his locations in New York.

About 90 percent of the wines served at the restaurants come from the Finger Lakes.

McKay said some people equate “buy local” with “spend more.” But that’s not always the case.

Pyra said her farm’s beef is comparable in price to local grocery store prices; however competing on price isn’t the key to winning consumers.

“It’s better,” she said. “You can know where it’s grown and what it eats.”

Heroux agreed, “The cost isn’t the form of dollars and sense.” 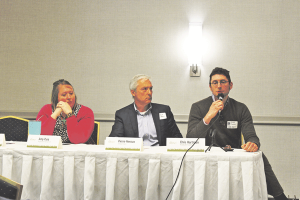 He calls working with local suppliers a “no-brainer. I’d be an idiot to not have locally supplied items on my menu.”

All of the panelists agreed that farm-to-table concept is not a passing fad, but is here to stay.

“It’s only going to get better as we educate people,” Heroux said. “This is going to be a way of life.”

“We need to keep pushing what we do well. We need to educate kids about what it means to buy local.”