How antibiotics are changing and what that means for cattle feeders 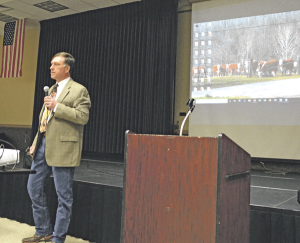 “Being that there’s always going to be bacteria on the food we get, the question arises as to what happens to some of those bacteria when they carry resistance genes,” said Dr. Lowell Midla, veterinary technical services manager at Merck Animal Health. His topic at the 2020 Cattle Feeders Day in Lancaster, PA, was the future of antibiotics. (All antibiotics must be obtained from a veterinarian or from a prescription written by a vet. Furthermore, much of what you read here will be Midla’s opinion.)

Short of irradiation of food, nearly all foods will always have some amount of bacterial contamination. Bacteria that have less resistance to antimicrobials are “less bad.” Resistant bacteria are no more or less likely than antimicrobial-susceptible bacteria to cause illness in humans. But when they do, the infection is more difficult to treat. “Every time an antibiotic is used we select for the organisms that are resistant to it,” Midla said. “Never say, and when you hear anyone say ‘Antibiotics create resistance,’ you know that person isn’t very smart. Antibiotics do not create resistance.” Every time an antibiotic is used in any species, selection pressure is applied and resistant strains are the survivors, and that is bad.

“There is a video put out by the Council for Agricultural Science and Technology asking the question ‘Are there antibiotics in our meat?’” Midla said. “I was a speaker in that video and I was reading from a script that stated ‘In the United States, meat is antibiotic-free.’ I got called on the carpet for that. They were right. Meat is not necessarily antibiotic-free. We have a maximum residue limit (MRL). The FDA establishes an MRL, a very tiny amount, under which we think that this is safe, and that amount of antibiotic doesn’t matter. What’s more, this is parts per trillion. PPT are on the order of one second in 32,000 years. We also have analytical methods these days where we can measure a part per trillion of antibiotic left over in a product.” It is very close to zero, but it is not zero. Because it is not zero, there is no way you can say “antibiotic-free.”

Eighty percent of antibiotics are used in food animals. They do that by measuring Pounds of Antibiotics Delivered. While tetracyclines are no longer the “go-to” antibiotics for most infections in humans, they are still the antibiotic of choice for certain infections. Antibiotics are not like hammers. “What do you do when a small hammer doesn’t work?” Mitla asked the audience. “Get a bigger hammer!” they chimed in unison. However, “there is no such thing as a stronger antibiotic,” he said.

As an analogy, “think of a key in a lock,” he said. “That bacteria is either susceptible to that antibiotic on a given day or it is not. So, for many conditions, penicillin is still the antibiotic of choice.” Antibiotic use peaked in 2015, before the VFD (Veterinary Feed Directive), and well before you needed a prescription in the feed – a 40% drop in antibiotic use between 2015 and 2018.

About 25% of feedlot livers are condemned due to abscesses. Cattle are meant to eat grass. They transform the 25% or so of the earth that is grassland into tasty protein. “Instead of letting them graze until they are four years old, and get fat, and then harvesting them,” said Midla, “we allow the mama cow to graze the whole year round, depending upon where you live, and allow that calf to graze generally for most of the rest of its life. For only a few months do we put it in a feedlot on a high carbohydrate/low forage diet for the final six months prior to harvest. Cattle were not built to have that diet.” When that happens, rumen in the pH goes down. Then it’s a domino effect. Acid/low pH can result in rumen wall damage. Damaged areas of the rumen wall allow bacteria into the portal blood which flows to the liver. Bacteria in the liver often result in abscesses. Tylosin lowers the prevalence of liver abscesses in feedlot cattle from 45% to 15%, and continues to be effective.

“The dude whose grandfather had a hundred acres, a dairy farm that milked 20 cows, is dead now, and this dude inherited the farm,” said Midla. “Down where I come from his dad was a coal miner, and this dude is an accountant who works in Pittsburgh. He still has the hundred acres. What does he do? He can let it grow up into trees, and go hunt deer on it. Or he can have 20 meat cows. That’s where the beef comes from – those dudes with the 20 beef cows. Do they have a chute? Do they vaccinate? Do they even have a vet? No! They put them on a trailer and take them to the sale barns.

“So what’s happening with antibiotics? I don’t know,” Midla concluded. “Use of antibiotics should be well considered.” The degree of antibiotic “prudence” varies widely among veterinarians. Vets are in a tough spot. They are called out to do something, not do nothing. Don’t be afraid to ask “Are we doing the right thing here?” Every time an antibiotic is used, there is selection pressure toward different strains of bacteria. Until there is a better solution, or legislation, Tylosin will and should be used to control liver abscesses. Bovine respiratory disease is also a problem that could be mostly solved by management, but Midla said that is not possible.