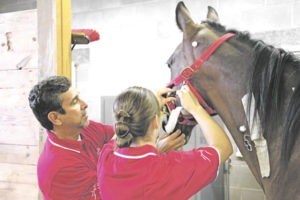 On Sept. 23, the Department of Animal Sciences at Rutgers University Graduate Program presented a webinar on “assessing muscular tension as an indicator of acute stress in horses.” The study presented was a prototype for using the approach in assessing stress in veterans with post-traumatic stress disorder (PTSD) and the horses they are working with during an eight-week equine-assisted activities program. Ellen Rankins, a third-year Ph.D. candidate at Rutgers, gave the presentation on the use of surface electromyography units (sEMG) to record the muscular tension experienced by the horse as an indicator of stress. Surface electromyography is used in humans as an aid to diagnose neuromuscular disorders, determine the need for surgery and to evaluate muscular function and the effects of sports and rehabilitation programs.

The aim of Rankins’s doctoral research project is to investigate the interaction between humans and horses, specifically PTSD-affected veterans who might be treated by working with horses. Equine-assisted activities allow people with physical, emotional and other challenges to find strength, healing and independence through the power of, and connection with, the horse. This dovetails with her teaching of therapeutic riding lessons, and she explained that it’s been documented that working with horses has been helpful in the healing process.

Rankins’s theory is that stressful situations would alter a horse’s muscular activity, and that a number of stress-related behaviors would be displayed in the test group of horses. The electrodes are non-invasive, and the procedure involves monitoring the activity of groups of muscles at rest as well as during activity. The data are recorded and analyzed. Electrodes are placed on the pre-clipped and cleaned test areas and are secured with adhesive.

For the research project, eight mature Standardbred horses with calm temperaments were used – four mares and four geldings that were used to being handled in test situations in the lab. The horses were used in four tests each. The tests were labeled Control, Social Isolation, Novel Object and Sham Clipping.

During the Control test, the horse was turned loose in a box stall in the exercise lab. There were other horses in the adjacent stalls; the test horse seemed fairly relaxed, appeared to be “bored” in an empty stall and moved around a bit, but seemed to remain fairly calm.

For Social Isolation, the test horse was turned loose in the stall but with no other horses were nearby, and there was no visual or sound contact. Horses are naturally gregarious and are accustomed to being around their companions at all times; it was expected that this isolation would induce stress in the horse. It began rearing, moving around and pawing the ground, kicking out and seemed more agitated than in the previous test.

The Novel Object test invokes stress or a startle response. The horse was led by a handler onto a tarp that was affixed to the ground. It was able to move around and express behaviors but was not allowed to leave the tarp. The horse pawed the tarp and moved around several times, touching its nose to the tarp.

Sham Clipping was used to induce stress. Electric clippers were operated by a handler, who also held the horse in position. The clippers were turned on and were placed at the top of the neck, in the poll area, and alternately on each side, without actually clipping the hair. The horse heard the sound of the clippers but experienced no sensation of having the hair clipped; he raised and pulled his head to the side, showing head and neck movement, but was fairly quiet for the handler.

In this horse/human study, activity in four muscles were chosen to monitor:

Stress indicators and behavior were studied by a team of three undergraduate students who recorded the total number of stress-related behaviors in their analysis. The horses exhibited tension in the jaw area when exposed to Social Isolation, but not when on the tarp. Some tension increased along the neck in the Sham Clipping and Control tests, but there was no difference with the Social Isolation, which caused more stress in the face area. The Cervical muscles at the top of the shoulders were affected under Social Isolation and the Novel Object tests, mainly due to increased movements from walking around on the tarp, and rearing up during Social Isolation. The Longissimus dorsi showed no major effects in the test and was found to be not very relevant to the study. To sum up, the horse’s behavior during Social Isolation showed the most stress mainly due to behavior, while Sham Clipping showed muscular indicators of stress in the jaws and neck with none due to behavior.

The results of stress studies in horses will be utilized during the equine-assisted activities with the veterans, with the expectation of seeing similar muscle reactions in the veterans that will change over time. As many of the veterans have not had experience working with horses, there is an amount of stress during the first week of the program; the expectation is that over the eight-week-long program this will decrease, and the horse/human interaction will be dependent on the individuals interacting.

The Equine-Assisted Services for Veterans with PTSD Research Project, located in Monroe, NJ, is currently underway, with veterans signed up to participate and more being enrolled. Testing is being conducted in New Brunswick, NJ, and the project is partnering with an outside facility, Special Strides, who are providing the programming, horses and staff. Their horses have been specifically selected and trained to participate in this type of program, which is entirely ground-based, meaning that the veterans do not ride. They learn to interact with the horses from the ground through skills such as grooming and leading. The staff will teach the sessions and work with the veterans and horses, and Rankins and her research team will be there during the sessions to collect data.

For more information on this project, visit esc.rutgers.edu/eas-ptsd.