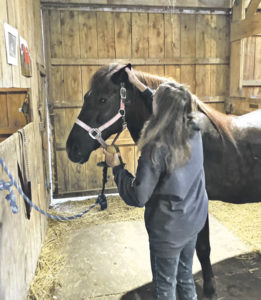 It’s been a busy summer, and weather-wise not the best. We had lots of hot, humid weather followed by what was considered the rainiest July ever – at least that’s what my hay supplier stated when he brought the last of our winter’s supply of hay and finished filling the barn over the weekend. We’re usually finished filling our barn much earlier in the summer but with all the rain it’s made making good hay very difficult.

One thing we learned that lots of hot weather and rain is good for is ticks! Ticks thrive when they are exposed to lots of moisture and humidity – and when we receive a lot of rainfall, the tick populations will increase, as will cases of Lyme disease. There have been many studies that show a direct connection between the amount of precipitation and the incidence of Lyme disease. Not only are tick populations exploding due to the wet summer weather, but one of their primary hosts, the white-footed mouse, is also more prevalent.

Our summer started with a checkup at our doctor’s office, and we were quite surprised to find that my husband, Ed, tested positive for Lyme disease! He was put on a 21-day course of doxycycline (an antibiotic) to remedy the effects. A month later, I called our veterinarian to come and check our 17-year-old mare for a lameness issue, and he took blood samples to send out to Cornell University’s Animal Health Diagnostic Center, only to find out that she too tested positive for the disease.

Lyme disease is transmitted to horses by ticks that are infected with the bacterium Borrelia burgdorferi. The ticks feed on a host, attaching themselves to humans and other warm-blooded animals, and the resulting bite is what transmits the bacteria.

Clinical signs of Lyme disease in horses can include sporadic lameness, shifting leg lameness (which is what caused us to suspect Lyme in Morgan), chronic weight loss, low-grade fever, muscle tenderness, swollen joints and arthritis. In addition, it can result in changes in behavior and skin sensitivity, as well as depression and other neurological signs.

The test that was developed at Animal Health Diagnostic Center at Cornell is the Equine Lyme Multiplex Assay. It detects antibodies to three different antigens (which are substances that cause the immune system to produce antibodies against them) of B. burgdorferi from one sample.

With the test report comes a brief interpretation on each of the antigens, namely OspA, OspC and OspF. These were explained on the finalized report they sent:

More information on this was available on their website, which stated that OspF is an indicator of chronic infection. Antibodies to OspF are detectable by five to eight weeks after infection and are maintained at high levels afterwards. Researchers at Cornell observed that horses with positive antibody values to OspF and negative antibody values to OspC (as ours was) are considered to be infected with Lyme disease for at least five months.

An approved vaccine for horses is not currently available. However, according to the Cornell, horses are sometimes vaccinated with one of the three available Lyme vaccines for dogs for the attempted protection of horses that reside in areas where Lyme disease is rampant, but recent studies indicate that although horses can respond to the canine vaccine, the response was short-lived.

The current treatment most commonly recommended for horses affected with Lyme disease are oxytetracycline, minocycline or doxycycline. In one experimental study, oxytetracycline treatment seemed to eliminate persistent infection, while three out of four ponies treated with doxycycline showed increasing antibody values by three months after the treatment ended.

Several years ago, our Thoroughbred gelding tested positive for Lyme disease, although we didn’t have the Cornell Multiplex Assay at the time. He was treated with daily doses of human-grade doxycycline for six weeks (crushed up and mixed with water, then squirted into his mouth) and developed ulcers as a result – which also required weeks of treatment.

Our very old Morgan mare tested positive for Lyme disease a couple of years later, and we were concerned about risking her developing ulcers from the same treatment; at the time we enlisted the aid of a holistic veterinarian who had developed homeopathic protocols for Lyme disease. We used his homeopathic treatment and Sabrina seemed to be free of the disease after a number of weeks.

The best defense against this disease is to try and prevent or limit your horse’s exposure to ticks. Daily grooming is imperative, especially under the jaw, in the ears, around the mane and inside the legs. Remove any ticks you find, as it takes up to 24 hours for an imbedded tick to transmit bacteria. Use tick and fly spray all over your horse’s body, paying special attention to the legs, head and tail, on a regular basis, even after the first frost, until temperatures are below freezing. Free-ranging chickens and guinea hens are helpful in keeping ticks to a minimum; also consider fly predators that you can purchase online as a preventive.