Northwind Horse Farm in Wallkill, NY, was the place to be on Nov. 20. The Orange County 4-H Horse Program held a “Horse Fun Day” at the farm, with more than 150 boys and girls in attendance. Geared for ages 4 and up, the scores of children waiting on line to sign in could barely contain their excitement; squeals of “there’s horses inside!” and “I can’t wait to ride a horse!” punctuated the crisp, sunny morning, warming the hearts of the 4-H staff and volunteers who prepared for the popular event. Children were greeted by Rosie Budney, owner of Northwind Horse Farm; DeAnna Sardella, 4-H resource educator; and Carol McLaughlin, 4-H administrative assistant, and were given a “passport” to bring to each of the stations to have signed. Parents were advised to allow approximately 1.5 hours to complete the activities, but all were welcome to stay longer. A food truck manned by 4-H’ers and volunteers provided hot foods and beverages.

The five stations inside the large indoor arena received a steady stream of children and featured activities on grooming a horse and pony; riding leadline on a horse; learning about horse anatomy, tack and the Standardbred breed; playing horse games/learning horse communication; and creating and decorating a horse craft. In addition, another activity on barn management was held in “the big barn,” where 4-H members demonstrated the basics in caring for a horse.

Orange County 4-H clubs, including the 4-H Trailblazers, the Foxlair Equestrians and the Country Kickers, organized and prepared the creative and colorful stations and provided 4-H members and parent volunteers to man each one. 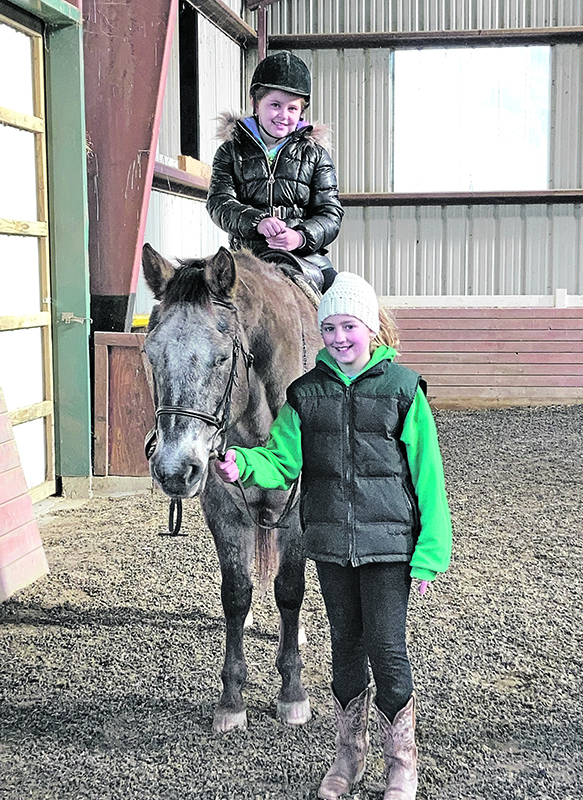 The Pony Rides were a big hit with the children in attendance. 4-H members supplied safety helmets, assisted children in mounting their horses and led them around the arena.
Photo by Judy Van Put

The program was first created six years ago, as the Orange County 4-H clubs wanted to expand their outreach. Budney opened up her farm as host and provided her horses for the events. The Fun Day is organized so that each club runs its own station.

Organizers reviewed the requirements for Boy and Girl Scout badges and tried to “hit every note” to coordinate. 4-H events always collaborate to include a craft (hands-on) and at the end of the program, participants are asked to reflect and relate one thing they learned during the day. As is typical with 4-H events, adults are always present, but the youth are given leadership opportunities.

At the first station, 4-H members demonstrated how to groom a horse using a rubber curry, body brush and hoof pick. Children in attendance were taught to be aware of how to move around a horse while grooming and had a chance to brush and clean a smaller horse, followed by Whiskey Pete, a 17.3-hands-high Standardbred retired racehorse. Whiskey Pete broke the race record at the age of 4 with his fastest time of 1:48.4 and today lives on Cameo Hills Farm in Montgomery, NY, where his owner, Kathy Jones, enjoys riding him Western. He was a big hit with the children, standing peacefully while several applied brushes and combs and posed for photos. Long-time volunteer Maryanne Mann also brought the 14-year-old “Gentle Giant” to the grooming station and taught the children about the breed.

The next station was the pony rides, where members of the Trailblazers provided safety helmets, assisted children with the mounting block and led them around, many for the very first time.

Children were drawn to the exhibit on horse anatomy, tack cleaning and horse games, where they were encouraged to guess the correct names of various muscles and parts of the horse, and place name tags on the corresponding parts of the English and Western saddles and bridles that were on display.

At the fourth station children learned how horses communicate. Colorful posters contained photos of horses in various positions and depicted how a horse lets others know if it’s happy, angry, relaxed, alert, nervous or saying “I like you.” 4-H members explained how observing a horse’s body language can help you to decipher what the horse is thinking or feeling at any given time. A quiz followed which enabled participants to try their hand at translating what the horses in photos were trying to say or portray.

The craft table was manned by parents and 4-H members who showed children how to make their very own “stick horse” starting with stuffing a sock with polyfiber, then choosing a mop head and screwing the mop on the handle with the sock head attached in between. Participants were given a long black ribbon for reins, and then tied on their choice of colorful scarf at the throat. A hot glue gun attached the ears, eyes and nostrils.

In the “big barn,” participants learned about stable management, where 4-H’ers demonstrated the basics of owning a horse. They led a discussion on feeds, which types were used and why, and how and what to feed each of the horses on the farm, ranging from active and growing equines to elder horses, each with different food needs. The daily routine was described, beginning with feeding morning food and hay, turning out for the day, then cleaning water buckets and stalls and feeding again at night. Children were shown how to “muck” a stall – participants were encouraged to try their hand and were given a pitchfork and shown how to sift through the bedding of fine shavings and toss the manure. Many were excited at being given the opportunity to feed one of the horses a treat.

Horse Fun Day organizers were pleased at the turnout of upwards of 150 enthusiastic children at their event, which showcased the vibrancy of 4-H clubs in Orange County. Brochures inviting children to explore the 4-H programs were available, as well as the opportunity to sign up and join a club. One volunteer parent who regularly spends his time with his children’s 4-H projects observed how the program provides an opportunity for children who aren’t able to own their own horse to learn, and “if they’re on the fence about learning or taking lessons they can ride a pony and see if they want to jump in.”

I joined 4-H as a horse-loving girl at age 9. Never having had the opportunity to own or grow up with horses, I learned enough through my 4-H experiences to become the proud owner of a horse when I reached my early teenage years. I think back often on those days, my 4-H leaders and all that they taught me. Horses became a large part of my life, and still are today.

A two-year study on 4-H clubs in New York State revealed that those who participated in 4-H are more motivated to help others; do better in school; develop skills in leadership, public speaking, self-esteem, communication and planning; make lasting friendships; and learn life skills that help them make a successful transition from childhood to productive adulthood.