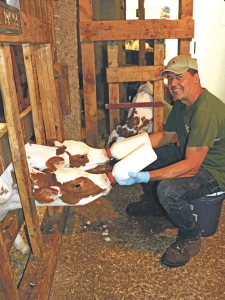 During the end-of-July heat wave, the line was 30 deep as people waited for ice cream at the seasonal Hornstra Farms’ Dairy Bar. There were 14 flavors available, from vanilla to cow tracks (a mix of vanilla, peanut butter cups and fudge swirl). It was a purchase that promoted good feelings: they were indulging in handmade ice cream and supporting a local dairy farm.

Fifth-generation farmer Abigail Hornstra was one of the ice cream scoopers. Inside the year-round farm store, her sister Courtney sold pints of ice cream, milk, chocolate milk, fresh eggs, dinners-to-go (from a selection of chicken pies to chicken Parmesan, pizza and stuffed shells), their signature 45% butterfat heavy cream and more. The dairy bar and farm store opened in 2014.

A family-owned business, their father John Hornstra is the fourth generation to run Hornstra Farms in Norwell, MA. “It’s his baby,” said Courtney. John’s wife Lauren is the bookkeeper and runs the office. Their daughter Lily and son (also John) work on the farm too. His sister Alison works in the office.

On the same evening, in the calf barn, a dozen sleek calves from one- to two-weeks-old ate their grain while people working on their ice cream cones looked on. Several calves nuzzled greedily on a handful of quart-size bottles held by Gilson De Almeida, who has worked at Hornstra Farms for two years. Having grown up on a farm, he loves everything about working there. He is one of the about 30 employees Hornstra Farms employs, for their home delivery business, milk processing and bottling plant, ice cream making, butter churning, pasteurization room and driving their seasonal ice cream truck to events.

Hornstra Farm was started by Anske and Agnes Hornstra, who emigrated from Holland in 1912 with their six children. They realized their dream by buying a dairy farm in Hingham in 1915. The farm continued down the generations with Jack Hornstra and John Hornstra, as they built up a home milk delivery business. Then, as happened with many dairies, “our cows left in the spring of 1969. We were out of the cow business for a long time,” said John.

Undeterred, they continued their well-established home delivery business by buying milk from Hatchland Dairy in North Haverhill, NH. In 2009, they bought the defunct dairy, Loring Farm, in Norwell, with 80 acres that had seen no cows since 1982. It had been preserved through Agricultural Preservation Restrictions (APR). Bringing the farm back to life was the family’s next task. 2013 saw their first milk bottles coming from their new processing plant.

John is a champion of bottling milk in glass bottles. Avoiding plastic waste is one reason. “It always tastes better in glass,” he said.

Hornstra Farms bottles their milk in glass bottles under their own label. Tully Farms Dairy in Dunstable supplies them with the extra milk needed to fill deliveries to 20 South Shore towns and to make into cheese and ice cream. To help make Tully Farms sustainable, they also bottle milk for them under Tully Farms’ label for their home delivery business. They purchase Tully’s milk through Agrimark and pick it up in their own truck so it doesn’t co-mingle with milk from any other dairy. 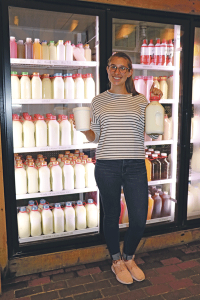 They pasteurize their milk at lower temperatures for a longer amount of time than usual, at 145° for half an hour, versus 180° for 15 seconds. Not only does this retain the milk’s flavor, “it retains nutrients and enzymes that help you digest the milk,” John explained.

They have 60 milking cows out of a herd of 100 red and white Holsteins. A tunnel ventilation system keeps the cows in the tie stall barn cool, even in 93° heat. They stand on special mats to cushion the cement floor. Each cow eats about 90 pounds of food a day (mixed rations of hay, grain and corn silage), as proper nutrition is key to optimum milk quality and herd health. The results of this specialized care means the cows need less antibiotics.

The farm gives many tours. John decided to open the farm to the public as part of the local farm movement. He has found that the public is often misinformed about dairy farming and believes that the best way to offset this and help the public understand is to do farm tours and field trips. Being face-to-face is the best way to demonstrate how their products are produced and educate the public on how a dairy farm works, with the added value of leaving a positive, lasting impression.

He said his favorite part of having rejuvenated the farm is “doing the field trips, engaging the children in seeing how milk is pasteurized and where milk comes from.”

Meanwhile, people continue to line up to buy their ice cream and amble around the farm. For more information, visit www.hornstrafarms.com.