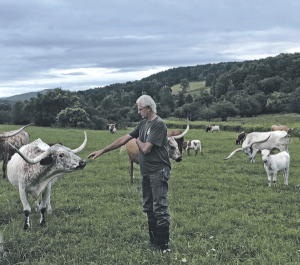 When Mike Albanese was just five years old, his grandfather reminisced about oxen with horns so large the animals had to turn their head to fit through the barn door. Mike’s grandfather was a shepherd on a small northern Italian village in the Alps before emigrating to the U.S. In 1940, his grandfather purchased land in Jamesville, NY, to start a new farm and often shared memories of home.

“I thought the story of the oxen was so fascinating and that it would be awesome to have cows like that,” Mike said.

As a kid, Mike was surrounded by cattle, but none had horns (or at least not horns that large). Relatives on both sides of the family operated dairies and his parents ran their milking herd until retiring in the 1970s. After high school, Mike attended SUNY Morrisville and studied automotive design. He got an internship at GM and met John DeLorean, an engineer, inventor and GM executive.

“I was fascinated by him because he was innovative and a muscle car kind of guy,” he said.

After Mike graduated college, his father expected him to join the family building materials business. For the next 25 years he ran the company before selling the concrete plants and starting a second business. While his early career kept him off the farm, he always kept a hand in agriculture, owning a horse or two.

Ironically, a car show in the 1980s reignited his dream of owning cattle with big horns. His cousin Frank was driving to the event and got lost on dirt roads in Norfolk, NY. On the side of the road Mike spotted a sign advertising Texas longhorns.

“I asked to stop and he said no so I wrote the phone number in dust on dashboard. I called a day or two day later and asked if any were for sale,” Mike said.

He set up a visit and immediately bought three. Since then he’s bred, raised and sold thousands of Texas longhorns on his family farm, which includes the land where his grandfather first told him of animals with big horns. The operation spans 550 acres, 286 of which Mike owns. The rest he rents for grazing, small grain cover crops and dry hay.

“We are raising all dry hay, largely the small square bales that we sell to the horse industry,” he said. “We have a demo for a baleage machine so we’ll see.”

Texas longhorn cattle were nearly extinct in the mid-1920s. In 1927, the United States Congress appropriated $3,000 to buy 19 longhorn cattle to be sent to the Wildlife Refuge in southwestern Oklahoma. The national preserve was established for the protection of game animals and birds, explained Mike. From that herd, seven bloodlines persist. Mike prefers the Butler line, one where the animals were slightly smaller, but had larger horns than other lines.

“I’ve had females here that were over 90 inches tip to tip, though the average is around 80 inches,” he said. “We have had some steers over 100 inches.”

In addition to horn size, Mike appreciates that the breed is thrifty. The good grazers are quick learners and his entire herd comes when beckoned with a cow bell. The animals tend to be hardier and more resistant to diseases such as pink eye than other breeds. Since launching his breeding program, he only remembers one cow needing help during calving. And it’s not uncommon for a healthy cow to calve into her twenties.

“They are prolific, easy breeders,” he added. “I try to get an adult cow into the 900-pound range. Our four-year-old steers are probably crowding a ton.”

Until recently, the operation has largely focused on raising and selling breeding stock. He’s had several cows sell for $5,000 and the Canadian market has been strong. He’s been able to tap into that market, being located a few hours from the border.

“The income of Toronto is pretty high and they want the uniqueness of the Texas longhorn,” he said. “We have probably sold 70 to 75 head to Canadians over last few years.”

This spring, Mike’s family urged him to launch a marketing campaign advertising beef for sale using the slogan “Nature’s Leanest Beef.” By emphasizing local, organic, grass-fed, hormone-free beef, the family has sold more meat in the last few months than the past few decades.

“I didn’t think it was going to take off that fast and it did. The first few weeks, my youngest daughter was making deliveries all day every day,” he said. “Now it’s coming back down to a comfortable plateau level. We were having trouble finding processors. Then we found one who is taking three a month for us now.”

With the pastures close to the road, it’s inevitable that he’ll get a few calls a year that the cows are out. Passersby are intrigued when they see the animals, pull over and let themselves in. When the cows amble over to say hello, the visitors panic and run back to their car, leaving the gate wide open, he explained. He is eager to share his enthusiasm for Texas longhorns, but asks visitors to set up appointments so he can make sure none get loose.

“I love to talk to people about the cows,” he said. “Anyone is always welcome. We’ll load them into the back of a pickup truck or hook up a hay wagon and drive them around to see the cows.” Newcomers are always amazed that his grandkids are running in and around the cattle and their horns.

“I think there is a myth, especially among dairy farmers, that a Holstein with horns is dangerous. It is not that way with longhorns,” he said. “They are much quieter than other beef cattle. They are curious, fun animals.”