Honorone in the running for inaugural Leopold Conservation Award 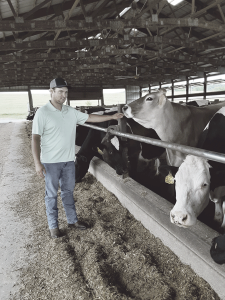 New York has given out Agricultural Environmental Management (AEM) Awards for years. It’s now joining forces with the nationally-recognized Leopold Conservation Award (LCA) program, named in honor of renowned conservationist Aldo Leopold. The AEM-LCA Award will honor a farm and its nominating Soil & Water Conservation District for their efforts to promote and protect the environment through the preservation of soil and water quality while helping to ensure farm viability for future generations.

Before setting up shop at Honorone Farm when Justin was only six months old – he’s now in his early twenties – Kathie and Scott ran a 40-cow farm in Oneida County, which Kathie said they simply outgrew.

“This farm has decent acreage and characteristics,” Scott said of their Montgomery County property. They farm 530 acres today; they started with 206. They currently have 90 cows (primarily Holsteins, with some Swiss and some crossbreeds). They’ve set aside 45 acres for their rotational grazing, which is a large component of their conservation practices.

“We did rotational grazing while we were still in Oneida County. It’s just a more efficient set-up,” Scott explained.

“We were always interested in regenerative agriculture,” Kathie added. “And if you watch the cows, they can’t wait to go out and graze. It’s less work for us too. We use a 30-day rotation. It saves us feed and work.” Justin tacked on that “cows are the cheapest harvesters.”

Scott explained they use strip-tillage and no-till seedings, which helps saves fuel, time and their farmland. “It’s so much better than conventional tillage, where you’d get ‘dead furrows’ which just became gutters for water to run through when it rained, leading to erosion,” he said.

The Ryans plant cover crop mixes, which include sunflower and radish, and practice interseeding. With guidance from USDA-NRCS and CSP, they learned how to effectively use wildlife strips as well. Stream bank stabilization was also an important goal – “we have planted a lot of trees,” Kathie said.

Honorone Farm has also done lots of public outreach. They’ve hosted Sunday on the Farm events, drawing over 4,000 visitors in 2017. The farm has hosted two pasture walks, along with state legislator visits. In the past, they earned a New York AEM Award and a Quality Milk Award, and they’ve been named a Dairy of Distinction.

Scott is the chair of the Montgomery County S&WCD and second vice-president of the New York Association of Conservation Districts. He and those groups collaborate with government officials on resolutions that benefit both farmers and the land they work. “We’re always doing little things to make our farm and the environment better,” Scott said.

“We’re trying to get away from the ‘old’ way of farming,” Justin added. “Always try to improve and better yourself.”

The Sand County Foundation, a national nonprofit conservation organization, will present the $10,000 cash award with the support of the New York State Department of Agriculture and Markets, American Farmland Trust, Cornell Cooperative Extension, the Ida and Robert Gordon Family Foundation, Farm Credit East, the New York State Agribusiness Association and other sponsors in the coming weeks.