Holy Cow – The gals from Granby 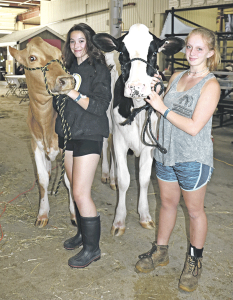 4-H clubs not only produce expert and knowledgeable animal handlers, they also create opportunities for long-lasting friendships. Both 16, Elizabeth Baker and Sophie Bolton are members of Holy Cows 4-H Club from Granby, CT, where they both reside.

Baker has been a part of the eight-member club for six years. She leases one cow each year and grooms it for showing. Bolton has been a member for seven years. They both lease their cows from Maureen Miller’s Millborne Farm in Granby, CT, and give them back at the end of the show year.

Baker shows her cows at the Hartford County 4-H Fair and the Big E. “I like building connections with them first – that way I can ease into working with them and show them off,” she said. The connection emanates in the ring, and is what the judges look for in showmanship. “It’s also a lot of fun. The cows really love you, and follow you around like a dog.”

For final touches to get her cow ready for the next day’s showing, Baker polishes her feet, brushes her tail, puts up her topknot and brushes her coat.

Bolton’s cow’s barn name is Triumph, a name fine-tuned for winning. “I just like the connection you get with the animals,” she said.

The ease with which they handled their animals makes it all look easy. What stands out that they have learned in working with their animals? “When animals are in heat, how dangerous they can be,” Bolton replied. “When they are in heat, they like to jump on you, and you have to get out of the way so they can land safely back on their feet. They don’t do that on purpose; it’s hormonal. You have to understand how they behave. You’re always learning something.”

“You learn a million things, always something new, even though you’ve worked with cows for years,” said Baker, including that cows have individual and sometimes unique personalities.

Safety of both handler and animal are paramount, and part of what is stressed in the 4-H club. The well-being of their animals is their responsibility. However, working with animals, there’s always possible glitches, so the handler must stay aware.

Bolton noted that just the day before, she was clipping a cow in a chute that is known for getting cantankerous. The cow started rocking the chute in her displeasure and the chute fell over. They had to carefully take her out.

4-H members are often high achievers, using the competitive edge to learn more and aim higher. Baker was competing in her classes despite a leg injury sustained in sports, which Bolton assured her would not hinder her chances.

“You have the reward at the end,” said Baker, “and the people around you.”