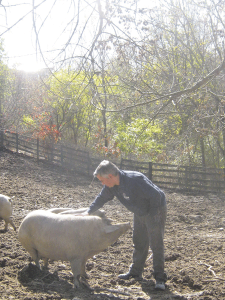 That distinction – between the finished product and the living animal – separates the food-focused from the farm-focused. Of course, the divide isn’t a chasm.

For butcher, charcuterie master and farmer Rodrigo Duarte, the lines have blurred, as the pigs he raises become the pork he butchers and the prized Iberico hams his customers eagerly consume. They are both his raw material and his finished product.

The pigs which Duarte raises – first in Portugal, and now in the U.S. – are far from standard hog industry pigs. They are a specialty class of the acclaimed Iberian pigs, which make the famed (and expensive) Iberico hams. His pigs are purebred Alentejano pigs, a breed whose genetics, as well as the protocols for raising them, are controlled by the Portuguese government.

“I’m the only breeder outside of Portugal,” Duarte stated. “I have to report back to them. It’s pretty restrictive.”

Unlike Spain’s standard Iberico ham, which must come from pigs that are a minimum of 50% Iberian pig genetics, the pigs Duarte is raising on New Jersey farmland will be crafted into the most coveted of all Iberico hams, 100% Alentejano acorn-fed pork, which until now could only be produced in Portugal.

The nuts in the pigs’ diet include acorns from the oak trees in their paddocks along with chestnuts and acorns imported from Portugal. For the last three months of their lives, the primary diet of nuts mimics the traditional method of feeding pigs raised in the forested mountains of Portugal. This diet, combined with their genetics, imbibes the meat with the distinctive flavor and texture for which the most valuable of the Iberico hams are known.

“We want the oleic oils, which come from nuts,” Duarte explained of his decision to follow the traditional, coveted finishing diet.

For a breed and a ham that is all about the terroir, it’s quite a feat for Duarte to have gained permission to raise these animals in the U.S.

Duarte grew up on his family’s hog farm in the Alentejo region of Portugal. From a young age, he raised the purebred Iberian animals to the standards outlined by the Portuguese government. The number of pigs allowed to be raised, as well as where and how they were raised, is all under tight control. This oversight is meant to keep the breed, and the meat which it produces, profitable.

With all of that regulation, Duarte realizes how privileged he is to have been granted permission to raise purebred Alentejano pigs outside of the traditional regions in Portugal. While considered in danger of extinction in the 1980s, the breed has been protected by government regulations, and the animals have had a moderate comeback, with approximately 6,000 breeding sows scattered across small farms in the Alentejo region. Their modest numbers, small herd size and controlled breeding and production methods ensure that these hogs remain viable, are raised on the land naturally and remain a part of the region’s social and cultural identity.

After gaining permission from the Portuguese government to import Alentejano semen for cross breeding purposes, Duarte was able to provide his own meat for the Iberico hams he crafts in his wife’s butcher shop, Caseiro e Bom, in Newark, NJ, where there is a large Portuguese neighborhood in the city.

He was able to achieve 80% Alentejano genetics in his herd. Any animal with at least 50% Alentejano genetics qualifies as Iberico ham, but these lesser hams, from 50% or 75% cross bred Iberian pigs, or from pigs pastured without the coveted acorns and forage-based diet, just aren’t the same. Duarte wanted authenticity.

All of the purebred Alentejano pigs raised in Portugal ultimately go under contract to Spain, to produce a subset of the famed Iberico hams. The hams from purebred Alentejano pigs are worth the most. Those raised on pasture and finished on the region’s famed tree nuts – the method Duarte grew up with and is practicing today – are the real deal, and will be sold directly through the butcher shop, as well as through contracts with several regional supermarkets.

The eight pigs which made up the initial breeding pool for his farm arrived in 2016. The first batch of pigs was ready to slaughter 18 months later. Right now, the fourth batch of hogs has finished consuming the autumn acorn crop and has grown to slaughter.

Duarte has three farms. The breeding and genetics are controlled exclusively on his Sussex County farm, in Wantage, where familial lines are closely watched to prevent inbreeding. Lineage is determined by the mother, and each pig has an ear tag with registration information as well as a color-coded one to designate its family line.

When new bloodlines are needed to prevent inbreeding, AI, from imported Alentejano semen, would be used to introduce new genetics. Duarte’s goal is to eventually raise 1,000 to 2,000 pure Alentejano pigs each season.

Duarte is still raising crossbreds, but those lines are separate from the purebred genetics. The crossbred animals are raised separately, using the same methods.

The Wantage farm, with a mere 10 acres of land, isn’t large enough to raise all of the purebred hogs, which are transported to satellite farms. Animals are raised outdoors 24/7, with the exception of farrowing and weaning. In Portugal, the pigs farrow outdoors too. Here, it is a bit colder, and until Duarte sees how well they acclimate, he is farrowing in a plexiglass greenhouse, with dirt floors and hand-built farrowing boxes, with access doors to the outside. The sows can freely come and go, but the piglets will be kept inside during the winter and protected as a cautionary measure.

Pigs are weaned at eight weeks. But from day one, they receive the standard diet of grains milled locally, vegetable scraps and ultimately pasture in addition to suckling. Breeding sows are pastured separately from the rest of the animals, while the barrows and young sows are separated by gender and age after weaning.

Water is brought to pasture via hoses, and in the winter troughs are filled by hand. The pigs are trained to several strands of electric wire fencing. Each paddock has an area for wallowing, and a shelter for shade or protection from the elements. Plenty of trees and brush provide shade and forages too.

After the pigs have consumed the pasture forages, paddocks are reseeded with a variety of cereal grains, including wheat, rye and oats. Preventing excessive rooting requires close attention, and animals are rotated before damage to pasture soils occurs.

Moving into the future, Duarte is seeking other area farmers who wish to raise Alentejano crosses. Duarte would retain control of the genetics, and the pigs would be raised via traditional small farming methods, on the prescribed diet. But the independent farmers he partners with would have a built-in market, with Duarte purchasing back the finished hogs. His hope is to create demand for made-in-America Alentejano ham and pork products, and to have this support small farmers in New Jersey just as it does for the farmers in his native Portugal.