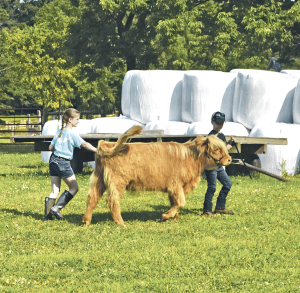 An enthusiastic group of young people gathered at Sheppard Farms in Hanover, PA, to improve their beef cattle knowledge and hone their showmanship skills. Although some were seasoned showmen, others were just starting to learn how to handle and exhibit cattle. Heather Lunn, who owns the farm with her father Peter Sheppard, hosted the event that featured their own Apple Hill Farm Highland cattle.

As they moved their animals around an outdoor ring, long-time Highland breeder Judy Ligo of Grove City, PA, patiently guided the youngsters through the fine points of fitting and showmanship.

“Showmanship is not about you. It’s about your ability to present the animal,” said Judy. “In order to do that, you need to know your animal, know its good points and faults. It’s the showman’s job to make the animal look its absolute best, and to do that without looking like you’re even trying.” Another important aspect of showing livestock is safety and avoiding situations that might cause injury to the showman or fellow exhibitors, both outside and inside the ring.

Judy said that’s a tough task for young people, and it takes a lot of practice. For those showing Highland cattle, the horns can present an additional challenge. “The older the animal, the longer the horns,” she said. “It takes some skill and technique to stay out of the way – it takes a long arm, bending and ducking. They have to pay attention and know where the horns are.”

For those in the early stages of learning showmanship, Judy encourages starting without a show stick. “It’s more about training the animal to do what you want it to do before the stick is used as a crutch,” she said. “If the animal is trained well and the showman practices frequently, you can get them to put three feet in the right place when they stop and only have to move one foot. The idea is to have the animal trained well enough before it goes in the ring so it doesn’t take much effort.”

Keeping the animal between the exhibitor and the judge is key in showing any livestock, and for youngsters who are just starting to learn how to handle a large animal at the end of a lead, that aspect can be quite challenging. Exhibitors will often take a Scotch comb in the ring and use it to calm the animal; however, having one more item to handle in the ring is often too cumbersome for first-time exhibitors.

Animals that seemed quiet at home can become uncooperative when placed in different surroundings such as show grounds, and exhibitors have to learn and improvise as they go in unknown surroundings. In some cases, animals that behaved perfectly during practice at home are unruly when surrounded by unfamiliar animals. “If you’re setting up the animal and it isn’t cooperating, it takes some practice to know how to turn and get back in line,” said Judy. “Don’t fight with the animal – take it out of position and come back in. Every animal can have a bad day, but if you can stay cool and stick with it and not get flustered, they’ll come around and settle down.”

Judy said exhibitors should start showing before they step into the ring. “The judge’s first impression is key,” she said. “It’s important to be on your toes when you walk in and continue showing, and don’t quit showing until you’re out of the ring. The judge is still evaluating you as you’re on your way out.”

Exhibitors should always be aware that they don’t really know where they are in the judge’s lineup until the class is over and placings are announced. Judy said some judges will purposely arrange the lineup so that the first place exhibitor is at the opposite end of the ring.

Showmen should know more about the animal than what color it is. Judy noted judges will often ask questions including age, birthdate and breeding (pedigree). “They’ll often ask the exhibitor to identify parts of the animal,” she said. “They might ask older kids to point out the animal’s faults. If they know their animal, they should know its strengths and faults.”

Judges will also ask exhibitors to switch animals in showmanship classes, and this aspect can often determine a clear winner. “It’s especially interesting when it’s an all-breed show and someone has to take a Highland,” said Judy. “It’s easier for kids who are used to a Highland to take one that doesn’t have horns.”

Judy said many Highland shows feature bagpipes, and that cattle tend to react negatively to the sound. She said it’s often best for exhibitors to move to the side of the ring and, if possible, tie the animal to help them settle down.

The American Highland Cattle Association includes a strong youth program, with opportunities for youth to exhibit at major shows throughout the nation. The National Highland Show and sale is held in Denver during the National Western Stock Show.

In addition to practicing showmanship, youth at the event also had an opportunity to learn about feeds and feeding, and participated in an interactive activity that involved learning the parts of a beef animal, working together to place those parts on a large cutout.