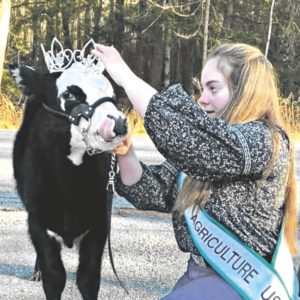 Being a senior in high school isn’t enough to keep someone like Clayre Ames busy. The Orange, MA, teen grew up on her family’s farm and started participating in 4-H as a Cloverbud. “That’s where I started to learn about showing and judging,” she said. “When I was 12, I joined Grange, which is one of the country’s first agricultural organizations. I recently became a subordinate member and got my seventh degree.”

Clayre is active with Junior Grange, and helps with activities during meetings, including teaching young members how to conduct the opening ceremonies. “We learned how to fold the American flag and taught them how to do the alphabet in sign language,” she said. “We also do community activities like cleaning up trash and make raised beds for the community garden.”

During her time in 4-H, Clayre became interested in horses and dairy cattle and spent time showing both species. More recently, she’s started exhibiting beef cattle. “The market animals I’ve shown were homebred,” she said. “It allows me to specifically breed my animals and pick the ones I want to show. If there are several born around the same time, I can choose what I want and sell the rest to make a profit.”

As she progressed through 4-H, Clayre also participated in FFA. She’s currently focused on developing her own beef herd. Clayre is a BQA-certified cow-calf producer, and said the training she received for BQA helped a lot with various aspects of raising cattle.

Although the Twin Brook Farm herd is still growing, Clayre intends to expand as she is able. “We have registered Simmentals, Angus, Sim-Angus, Sim percentage, an Ayrshire heifer and several dairy beef animals,” she said. “We also have a Black Hereford calf – that’s an up and coming breed because black animals are running the industry right now.” Black Herefords must include 64% Hereford genetics and have typical Hereford markings. One market advantage for Black Herefords will be that they meet the minimum 51% black hide requirement for Certified Angus Beef. Clayre hopes to be the first producer in Massachusetts to register a Black Hereford calf with the American Black Hereford Association.

Clayre plans to exhibit cattle this season, starting with the West Virginia University Block and Bridle Bonanza schedule for February in Waynesburg, PA. Clayre said early season shows such as this one help exhibitors see how their cattle compare to others of the same age and weight, and will help her determine which animals to prepare for shows later in the season.

In addition to cattle, Clayre and her family raise meat rabbits, laying hens and dairy goats. Clayre said the goats are bred in autumn for spring kids, then the milk is used to make goat milk soap. Beef is sold as whole, halves or individual cuts. Clayre said that at this point, slaughter dates are being booked for 2023.

Last year, Clayre was named 2020 Massachusetts Teen Miss Agriculture, which she said has been a great experience. “I go to fairs and represent agriculture,” she said. “It’s a great chance to meet new people. I learned a lot about leadership and public speaking.” Clayre was recently named the 2021 North Central Teen Massachusetts America’s Miss Agribusiness, and will compete in the national contest in November.

In addition to attending school and caring for her own animals, Clayre works on a nearby dairy farm, feeding calves and cleaning the milking parlor.

As for post-high school plans, Clayre is keeping her options open. “I might work for a while to earn money for college and study animal science,” she said. “I’d also like to study animal genetics – that’s a fascinating area.”