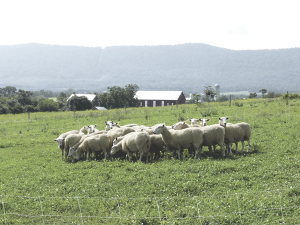 A quick look at market prices for various livestock species will show the most consistent prices for two species: sheep and goats.

There’s high and steady market demand for lambs and kids, making small ruminants a popular choice among first-time farmers. However, anyone who wants to raise sheep or goats, especially as part of a grazing or browsing system, should be aware of these species’ issues with internal parasites and plan to manage or limit infection.

The worm most likely to wreak havoc in a herd or flock is Haemonchus contortus (barberpole worm). The average producer will never see this worm, but the results of a barberpole infection can devastate a flock or herd. The average lifecycle of the barberpole worm is about three weeks, but can be as short as seven days. Understanding the cycle is key to managing pastures to minimize infection.

While inside the animal, adult barberpole females lay eggs that are expelled in feces. Eggs hatch and develop into first stage larvae (L1). L1 larvae feed on fecal bacteria and develop into the L2 stage. The next larval stage (L3) is where trouble begins. Larvae in the L3 stage don’t require feeding and can survive in a variety of pasture conditions. L3 larvae travel upward on damp blades of forage and are ingested by animals. These larvae end up in the abomasum (true stomach), attach to the stomach lining and mature to the adult stage.

The challenge in managing grazing to limit parasite infection is due to infective larvae spending time in its favorite habitat: warm, moist grass, laying in wait for grazing animals. Hatched eggs are expelled in manure, then the larvae mature just enough to crawl up a blade of grass. Those larvae are in the infective stage and initiate the next generation of parasites.

Adult barberpole females feed voraciously, sucking blood from the host animal. As they feed, mature females produce between 5,000 and 10,000 eggs every day. When parasites remove a certain volume of blood, the animal becomes anemic. Severe anemia leads to a weakened state, and animals are often unwilling to graze or eat. If too much blood is lost over a period of time, blood protein levels can drop. This results in excess fluid accumulation in interstitial spaces (the area surrounding cells). Gravity causes this excess fluid to accumulate in the lower abdomen or below the jaw of the animal. This condition is referred to as bottle jaw, and is a common clinical presentation in sheep with severe barberpole worm infections.

With ample grass available, animals often start a summer day with early morning grazing, which is when barberpole larvae are traveling upward on dewy blades of forage. However, larvae usually remain below six inches, so maintaining adequate forage height is one key to limiting infection.

Some animals are more susceptible to parasite infection, including young stock between weaning and yearling age, orphans, highly productive ewes or does, underweight animals, aged animals and females prior to or after giving birth. Animals less susceptible to parasitism include mature adults in good condition and females not nursing offspring. Certain breeds have a degree of resistance, but still must be managed properly to benefit from this trait.

One measure to limit parasitism on pasture is to graze the most susceptible animals on the cleanest pastures and follow with resistant animals. Watch carefully for overgrazing, and be prepared to move animals when forage height is below four to six inches. The goal is to maintain sufficient forage height. Goats are browsers with eating habits similar to deer, so it’s especially important to ensure they aren’t grazing close to the ground.

Pasture rotation is a critical aspect of parasite management. Ideally, animals graze a particular paddock intensely for several days before moving to another area. Each grazing area should remain empty for at least 60 days to ensure any remaining parasite larvae are dead. If sufficient pasture is not available, it’s even more critical to maintain forage height of at least four to six inches.

Creating clean pastures is another worm-fighting tactic. New pasture created following a crop, or pasture used for species other than sheep or goats, will be less likely to harbor parasite larvae. Ground used for hay production is usually fairly parasite free if the hay was dried down thoroughly and free of excess chaff left on the ground. 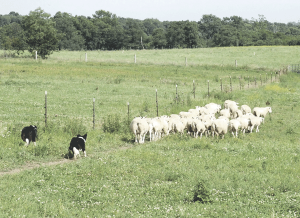 Stocking rate is another critical measure for parasite management. In general, stocking rate in the Northeast is three to five adult animals per acre of good pasture, modified as necessary. If animals, especially goats, eat browse at shoulder height or higher, they tend to remain relatively parasite-free. Whitley said browse can be highly nutritious, but must be managed carefully to avoid over-browsing that results in soil erosion.

Nutrition is a key factor for managing parasites. “We know that animals that are fed well and are in better body condition are better able to fight off worms,” said Whitley. “There are specific times this is important, like during the periparturient egg rise. Goats generally have higher requirements than sheep, but the pattern is similar.” Whitley noted that weaned lambs and weaned kids have higher energy requirements and forage often can’t meet those needs.

“Having a protein level above 30% has been shown to help fight off parasites,” said Whitley. “Browse species with high protein are mimosa, locust (black, honey), mulberry, privet, kudzu, green briar and trumpet creeper.”

A pasture-based small ruminant enterprise can be profitable, but only with close attention to the factors and management steps that limit internal parasites.