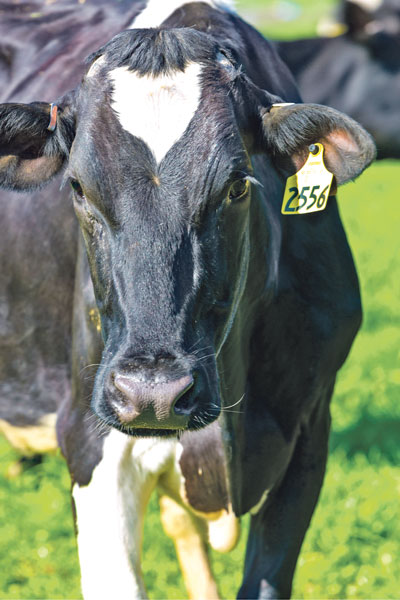 Feeding heifers right can both save a farm money and promote the health of the herd. Lifelong dairyman Tom Tylutki, Ph.D., recently presented “Heifer Strategies That Work Birth to Milking,” a virtual farm tour of McMahon’s EZ Acres in Homer, NY.

He spoke on heifer nutrition for the event, noting contributing factors include feed costs, how milk is priced and labor on the farm. While only pasturing animals is both environmentally friendly and economical, “it is far from biologically ideal,” Tylutki said.

Historically, the farm had relied on calf hutches for a long period of time, but now only until day 22 after birth. Then the calves come into a barn that houses them three to a group with dividers between the groups.

“When calves move into this barn, the young stock manager lets them adapt into individual pens a couple days then they go into groups. We’re looking at putting in a pasteurizer,” he said. The farm feeds calves thrice daily, with whole milk at morning and evening feedings and, at a graduated rate, milk replacer at noon. The calves gradually receive low starch, high NDF calf grain and are offered pellets and water from day two or three.

“We did a change in the weaning program,” Tylutki said. “It used to be abrupt, where they were fed 49 and by 52, no more milk. Now, we’re stepping it down over 10 days. We saw some impressive improvements on daily gains. The calves on the abrupt system gained one pound a day, maybe less, and the ones on the step down really had a small blip in average daily gain to the point where it’s very clear why we should implement this change.”

While the gradual weaning is beneficial, it costs more in labor. “After weaning, in a perfect world, by day 60 they’d leave this to go to bedded pack small groups but like most farms, we’re backed up on animal numbers,” Tylutki said. “You expand the number of cows, you have to expand the feed storage, space, manure storage, heifer barn – everything.” Once calves are weaned, they transition to the pack facility.

The farm hopes to build a larger barn next year to help address the overcrowding issue. Tylutki likes having barns with retractable curtains to mitigate temperature changes.

“I did some calculations through Dairycomp,” he said. “I took 20 animals that were moved where we had weights and started looking at the gains. Average birth weight was 80 pounds. At 90 days of age, we have an average weight of 236, or 1.83 pounds average daily gains.” He attributes the improvements to the longer weaning system.

“They’re still getting fed calf starter and high calorie TMR,” he said. “They remain on that until six months. And it really does fit their nutritional requirements very nicely.”

None of the four- to five-month-olds have access to pasture yet maintain an ideal body condition score for their age.

“For typical free-stall heifers, we don’t have fat heifers,” Tylutki said. “They are in a good level body condition. We do have nice frame on them and good muscle development. It’s awfully difficult to make fat heifers if you have adequate protein going into the diet. High calorie TMR is a perfect fit.”

The farm cares for 800 cows and 800 heifers. Taking the time to mix special TMR for each group would be costly both in maintaining a supply of the ingredients and in the labor for mixing each separately. Another cost a lot of farms struggle with is the cost of the mixer.

“The capital cost is high so they buy a smaller mixer,” Tylutki said. “Their operational cost goes up every day. Instead of a higher fixed cost, their variable costs are higher. I may reduce the amount of mixes. Making a smaller load doesn’t change the amount of time. Most of it is going back and forth between bunks or commodities bay.”

He estimated that it costs $112 in equipment and labor costs per load for his farm. “If I can feed 245 heifers off that load, that’s 46 cents per heifer per day,” he said. “If I split it, it’s 92 cents. This adds up really quick when we start making additional loads. That doesn’t include the time.” The farm’s six- to seven-month heifers are in a transition pen from bedded pack to the open barn. They still receive the high calorie TMR. At this stage, the cows shift from more protein deposition to more fat.

In order to control fat and give “teenaged” heifers something to do, he allows free feeding of low-calorie forage that won’t pack on fat.

“Being in the northern hemisphere and in Upstate New York, we can do that easily by our forage species selection,” he said. “We use a cool season grass, reed canary grass. We’re trying our first field of one of the improved fescues because we couldn’t get reed canary seed this year. We harvested it at mature.”

“I’m not feeding it for the protein but the controlled energy, the fiber, and it fits really, really well,” Tylutki said. “I don’t have to worry about having too high of energy in these diets because I control their intakes and let them eat as much as they want based on this type of grass silage. These heifers probably have the lowest nutritional requirement they’ll have throughout their life. It’s nice to be able to use this.”

The farm begins breeding heifers around 12 to 18 months. Though these pre-bred and early bred heifers have the lowest nutritional needs of their lives, Tylutki does not formulate specifically for these groups because of the size of the farm.

“From six to seven months through the breeding pen, when they come out of this, they have 735 average weight,” Tylutki said. He uses a custom soy blend with thiamine added to it, which proved 15 cents per heifer per day cheaper than soybean meal.

This age of heifer has access to a 25-acre grass field spring through autumn, which offers two to three pounds of dry matter intake. “If I didn’t have grass like this, I’d probably looking at using straw, low quality grass hay, anything I can do to avoid limiting feeding on heifers,” Tylutki said.

The breeding and early bred heifers remain together until up to six to eight weeks before calving. They receive the same diet. Tylutki checks their nutrition on day 190 or 191 of the pregnancy. At that point, the fetus begins to grow faster and is responsible for 1.5 pounds of daily weight gain.

For a quick estimation on his herd’s body condition, he checks their height and topline. Body condition “is a bit of a challenge, but what I have found for me on this farm, most of that challenge is if we harvest the grass too early and I have to feed really high-quality grass.”

The farm groups close-up heifers and cows together because of the size of the farm; however, heifers are collared to distinguish them from cows. “At six weeks pre-calving they moved out,” he said. “They were 1,296 pounds with average daily gains of 1.48 pounds, including gain of the conceptus.”

He said that summer grass, overcrowded housing and and dry corn silage made a difference.

The farm built the parlor in 1995 and is finding that more and more of the Holstein herd does not fit. “We’re adding Jerseys; they fit throughout the facility,” Tylutki said.

He is observing wider ranges of bodyweight increase from birth through six weeks pre-calving. “Some of it is overcrowding, as it’s a little bit wider range than we’ve historically had,” he said. “We have decent peaks, but the peaks are down quite a bit over the last year, probably seven to 10 pounds reduction in peak. I don’t see them peak until day 90 on first calf heifers usually. Now we’re at 87, 79. When we start talking about that change in body composition, this really does dictate how we formulate.

“For us to change the age of first calving, it’s changing pre-breeding average daily gain. We want them at that magical 55% of mature weight at breeding. For here, that’s 880 pounds for that breeding weight. To do that in 12 months, we need 800 pounds of gain in 365 days. My target average daily gain is over two pounds a day to hit my body weight target at first breeding. It’s so important. That’s the cheapest time to put frame and muscle on them, at puberty. Take a recipe, apply it to those young heifers, and you’d be surprised that a recipe for 80 to 100 pounds of milk matches what those heifers need.”