Hay is specifically for horses 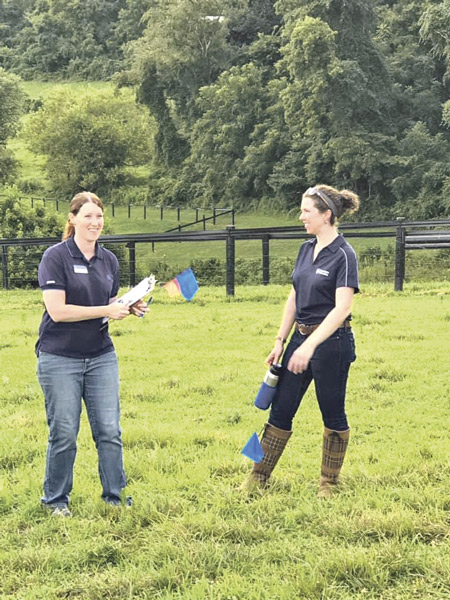 The Penn State College of Agricultural Science’s “Horse Hay Workshop” premiered in a newly adapted online version this autumn. The program was created to bring together horse owners and horse hay producers to better understand their respective needs and challenges. The course was presented by Andrew Frankenfield, Dr. Danielle Smarsh, Dwane Miller and Laura Beth Kenny.

How Hay is Made

Frankenfield is a Penn State agronomy Extension educator. He said that while his presentation was originally intended for those who produce hay for sale, horse owners have also benefited from the content. “Many horse owners are producing their own hay. They’ve told me that $6 or $7 per bale can really add up and is expensive. They’re eager to grow their own.”

Starting with mowing, Frankenfield stressed the importance of getting the timing right. “The head of the grass should just be visible for best quality or the first flowers appear on legumes for best quality.” He noted it takes two to three sunny days in the summer for grass to dry out enough to bale. Grass cut in the summer can often have water content as high as 80% to 85%; 10% to 15% water is ideal.

After mowing, raking and tedding, the cuttings can be critical. “Be careful,” warned Frankenfield. “Tedding can cause excessive leaf loss in alfalfa and clover.”

There are benefits and drawbacks in how hay is baled. “Small square bales are easy to handle, you don’t need big equipment and they’re easier to use when feeding just a few horses. But they are more expensive per ton and take longer to produce because of the labor needed,” he said. Round bales are cheaper and faster to make, but they do not stack as neatly as square bales and a tractor is needed to move them. “Large square bales stack better than the round ones, but like the round bales, you’ll need equipment to move them, and they are prone to having excessive waste if not stored properly under a tarp or roof.”

He also advised growers to be on the lookout for weeds. “Foxtail causes particular trouble for horses’ mouths. Canadian thistle is a perennial, it’s hard to control and can keep coming back. Try to nip these in the bud.”

Smarsh, an assistant professor of animal science, said there are a few important questions horse owners should ask when determining which hay is best for them: What forage species do you need? What kind of horse are you feeding?

It’s important to ensure the maturity of the hay matches up appropriately with the horse being fed. “Less mature hay is leafy, less stemmy. Mature hay is much more stemmy and has more seedheads and flowers.” Immature hay, such as an alfalfa-grass mix, has a higher nutrient content and is more suitable for young growing horses, lactating mares and racehorses in training. Mature hay that is grass only is less nutrient dense and is a better fit for overweight horses or horses in “maintenance status.”

Smarsh also discussed forage testing and hay analysis. “A hay analysis gives accurate information on protein, fiber, simple sugars and minerals. Forage probes are relatively inexpensive and can fit onto a hand drill. You want to sample 10% of your stock. Just make sure that you probe the center of the small end of the bale.” She underscored the importance of a hay analysis for owners of horses with equine metabolic syndrome, obesity issues and laminitis. Knowing the nutritional value of hay allows horse owners to best decide how they might supplement their feedings.

Agronomy Extension Educator Miller focused on the importance of proper hay storage. “Basically, you want to minimize dry matter (DM) loss and keep both moisture content and heating under control,” he said.

“Heating in hay occurs in all forages unless the moisture content is kept under 15%.” Miller explained that the “safe zone” for hay temperature is anything under 125º. “Once you’re above that, you’re in the danger zone. You should be monitoring your hay temps two to four times a day and increasing air circulation around your stacks.”

Handheld moisture-temperature probes should be used to keep tabs on hay heat. But according to Miller, there is also a quick way to gauge hay heat without a probe. “If you can hold it comfortably in your hand, the temperature is approximately below 130º. If it’s uncomfortable to hold, but you can still hold it, the temp is probably between 130º and 160º. If it’s too hot to hold, a fire is imminent. Call 911.”

He reminded course participants, “Keep the hay dry and off the ground. Maintain good ventilation. Keep air space between and above stacks. Alternate your stacking directions. Don’t put dry hay above high moisture hay. And, whenever possible, do not store above livestock.”

In her work as an equine Extension educator, Kenny found 15% to be the ideal limit to hay moisture. “Mold is fungus that form filaments, and sub-15% moisture inhibits fungal growth.”

Kenny enumerated the horse health issues associated with molds. “There are respiratory problems like allergies and recurrent airway obstruction, often called the ‘heaves.’ If your horses are having breathing difficulties, they’ll become exercise intolerant.”

She summed up her main strategy in preventing hay mold in three words: “Keep it dry!”

Toxic plant matter in hay often changes its smell and taste, which deter grazing. Many toxic plants remain toxic when dry in hay.

Kenny provided a list of toxic plants to keep clear of horses’ hay. “Milkweed is highly toxic. It can cause irregular heartbeat, slow breathing, tremors and staggering. Nightshade ingestion brings gastrointestinal effects. Horses will experience salivation, colic, constipation, diarrhea, depression, incoordination and muscle tremors. Hemlock is another bad one – the entire plant is toxic. It affects the nervous system. You could see abdominal pain, incoordination, dilated pupils and frequent urination and defecation.”

She recommended that any horse caregiver that suspects toxic weeds are in their hay supply should try to best identify what the toxin might be and contact their vet immediately for advice. “And never feed them hay that’s resulting in these symptoms developing.”